Mayor Adams and Police Chief Reese held a press conference, Friday Nov. 9, to showcase the results of Operation Safe Summer, which they say helped reduce gang shootings. They issued a chart that showed the trajectory of shooting incidents had risen steeply before June, and then flattened out.

But a meeting at Portland Community College's Cascade campus Thursday evening brought complaints from several youth and parents. They said students feel the stepped-up police presence at football games and on the street is racially biased and sends a damaging message.

Violence Rose in Early 2012
Earlier this year gang-related shootings were far higher than in 2011, with a total of 59 shootings recorded by June 8, compared to 40 the previous year. In years past, violence has tended to spike during the summer months.

"Going into the summer with that spike, I was really worried," said Mayor Sam Adams. "Folks really stepped up, and I want you to know I really appreciate that." 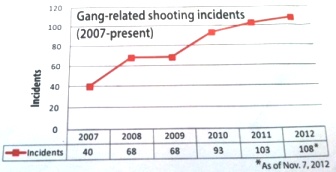 Operation Safe Summer Put More Police on Street
Adams and Police Chief Mike Reese re-deployed 17 officers, including two detectives and two supervisors, to violence prevention efforts over the summer. The city also added an additional 18 park rangers, and after a shooting at Peninsula Park, decided to install security cameras in Portland's community centers.  Now, those officers have returned to their regular duties with domestic violence, drugs  and vice teams. But the park rangers will continue working through the winter and into the spring.

The efforts worked to reduce the spike, said Clay Neal, the mayor's public safety liaison. "Over the course of the summer it pretty much flatlined."

Police Attend High School Football Games
The gang enforcement team and gang outreach workers, have been a constant presence at high school football games, especially Jefferson and Roosevelt games. The police officers, one of them also a football coach, attend the games with the aim of preventing fights and trouble. And some, Officer Chris Burley for example, also mentor teens. They say their intention is to support youth.

But some students and parents have complained that it sends a negative message that students of color are all potential criminals. Several made that point at a meeting on Portland Community College's  Cascade campus, Thursday evening.  About 100 people came together to discuss policing, race and the ideas in Michelle Alexander's book "The New Jim Crow".

A senior at Jefferson High School said the heavy police presence was creating, "fear and resentment toward the police.

"You walk by and they flash their lights at all the students. You feel singled out and ostracized and like you're doing something wrong by being in that area."

The parent of a Jefferson High School football player said he and his wife were surprised to see so many officers at the games, especially since the gang enforcement team, (until recently) was all white officers.

"When we went out to Milwaukie there was no officers to be seen, anywhere. What if there was all-black officers at a white school's game.

"It's extreme to have this, when you are just trying to have a good night out. Because it's almost like anticipating something will happen."

Police Focused Efforts on N. Killingsworth and Albina Streets
Similar complaints were made about the efforts to end graffiti and other nuisance crimes on N. Killingsworth Street. The Multnomah County District Attorney's office recently won a  $600,000 grant to put a Deputy District Attorney in the North precinct to work with the street crimes unit.

Police say they made 6,100 positive contacts with youth. But at the Cascade campus meeting a dozen youth and adults complained that police stops are racially biased.

Jo Ann Hardesty, a member of the Albina Ministerial Alliance and a former state legislator, said she had asked police for a breakdown of the 300 arrests made over the summer. In the month of June, she said the racial breakdown of arrests was:
Black:  180
Asian:  7
Hispanic: 7
Native American: 3
White: 31

Almost 50 percent of the arrests were for alcohol-related misdemeanors, such as drinking in public, Hardesty said.
"What difference would it have made if they had taken these people to alcohol and drug treatment instead of arresting them?
"I want a police department that treats kids in Northeast the same as kids in the Southwest Hills."

Complaints Surprise Police Officers
Police Chief Mike Reese was rushing off to a graduation event, Friday, so he didn't have time to comment extensively, but he said Portland Community College staff and the business owners on Killingsworth Street are relieved that nuisance crimes are down.

And PPB spokesman Pete Simpson said the extra police presence was needed to keep gang violence in check. Simpson pointed out that several shootings had injured or killed young men in the neighborhood, and one injured students directly after a football game.

Overall during 2012, gang-related shootings are up, at 109 through Nov. 9, mostly because of the increased numbers before the summer. In 2011 there was a total of 103 gang-related shootings. This year, the gun task force has seized 40 handguns, 31 rifles and brought 111 felony charges.   U.S, Attorney Amanda Marshall said this summer her office prosecuted 21 gang-related cases, including 17 weapons charges and four drug cases. All those cases carry minimum penalties of five years.