UPDATE: This just in from the Oregon Medical Examiner:
Thanks to a tip from the public, the Oregon State Medical Examiner was able to locate Kirk's sister and notify her of his death.
Sadly, Kirk was discovered at Bybee Lake in North Portland on Sunday, dead from a self-inflicted gunshot wound.
Help is available for community members struggling from a mental health crisis and/or suicidal thoughts. Suicide is preventable.
Cascadia Behavioral Healthcare has an urgent walk-in clinic, open from 7:00 a.m. to 10:30 p.m., 7 days a week. Payment is not necessary.
If you or someone you know needs help with suicidal thoughts or is otherwise in an immediate mental health crisis, please visit Cascadia or call (503) 963-2575.
Lines for Life is available 24 hours a day at (503) 972-3456.
ORIGINAL STORY BELOW:
A daily fixture playing trumpet and doing clown tricks on the West end of the Hawthorne Bridge for years, Working Kirk Reeves has died.
A memorial service is 4 p.m. Sunday, Nov. 18 at Kirk's spot on the bridge. There will be a small performance, then at dark, candles will be lit to honor the best-known street musician in Portland. 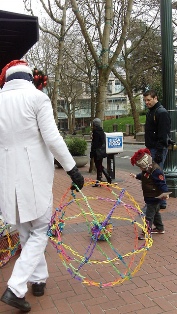 A native of Massachusetts, Working Kirk was an artist who struggled to find his place in the entertainment industry, said his friend Wanda Broadous.

"This was a guy who was very humble. Very loving, very caring," Broadous said. "He could not make it as far as his dream of playing the trumpet as an entertainer."

Broadous, a promoter through her company Broadous Entertainment, says that he worked for her in many street gigs.

Typically Kirk wore a white tuxedo – with a hoodie under it during the winter months -- and sat in his place playing trumpet songs, juggling and his signature magic trick that involved a round balloon.

He also performed in Downtown Portland outside the Macy's store, and had a comedy show on Portland Cable Access named for his own company -- Low Comedy Productions. He was a regular guest at OryiCon from 2004-2009, according to his LinkedIn page.

Broadous says passersby were sometimes abusive to Kirk, throwing objects at him as he performed.

"I think we need to take this opportunity to educate people about supporting these artists," she said. "Kirk was a wonderful, wonderful man, and we will miss him."