Elections 2012: History Made in Washington State 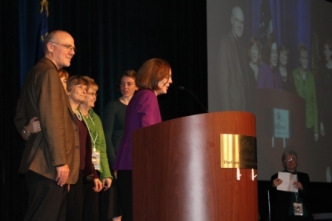 History was set Tuesday night in Washington State, where same sex couples will now be allowed to marry and marijuana has been legalized, to be regulated like alcohol.

Also in Washington, in what national pundits called the most competitive race for governor in the nation, Democrat Jay Inslee narrowly bested Republican Rob McKenna in unofficial results, 51 percent to 49 percent.

In Oregon, the incredible roller coaster of an Election Night that swept President Barack Obama back into office saw a paltry 54.98 percent voter participation in Multnomah County;  by contrast, Oregon's statewide voter participation rate soared to over 70 percent.

Meanwhile every proposed tax and bond measure passed in the City of Portland, including the Arts Tax, the Portland Schools bond and the Multnomah County Library levy.

Oregon's hot-potato statewide measures may be the reason for the higher state turnout, with a major battleground erupting around the Cannabis Tax Act, Measure 80. While Multnomah County voters passed the pot measure by a significant margin, at the state level it went down with a no vote of 54.83 percent.

More votes were cast in that one measure than in any other measure on the Oregon ballot -- 1,408,700 people weighed in on it.

Interestingly, the number spreads for some races showed almost no voter participation -- on Wednesday morning, Greg Macpherson stood as the unofficial winner of the campaign for mayor of Lake Oswego, with only a total of 532 votes.

Fritz was reelected with slightly over 58 percent of the votes; Nolan posted just over 40 percent.

The State Supreme Court, Position 3 race was the rare example of a hot competition between judges, with Richard C Baldwin pulling ahead of Nena Cook, with 93,847 votes to Cook's 87,192.

In Clark County, voters turned down a sales tax increase for C-Tran; turned down a bid to create a metropolitan parks district by a margin of two to one; and voted to put David Madore on the City Commission.

The race for Washington State Senate District 17 showed Wednesday morning that Tim Probst and Don Benton are both at about 50 percent of the vote.

Judge of the Court of Appeals, Position 6 Tim Volpert