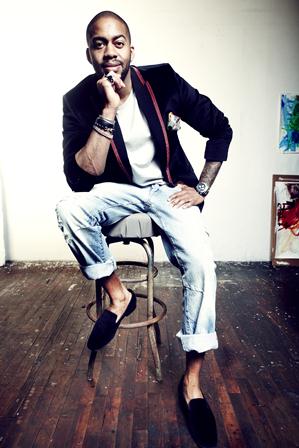 Until 10 years ago, Mitchell S. Jackson never saw writing as a viable career. Now an acclaimed author, he says the idea for his book came to him while in prison.

"Everybody in prison thinks they have this amazing life story," he says. "If someone could just write it down it would be a bestseller."

Jackson did write his story down and recently released his book "Oversoul" to critical acclaim. On Nov. 9, the Portland native will be returning home to speak to students at Self Enhancement Inc.

"For them to select me to come back to speak for the kids is really important to me," he says. "One of my missions is to encourage kids to tell their stories."

"Oversoul" is a collection of fiction and nonfiction that tells the stories of the author and his childhood friends.

Specifically, he says, 90 percent of his writing deals with his mother's influence and her struggles with addiction.

The book has garnered praise from critics for its authenticity.

Jackson felt the subjects covered in "Oversoul," such as friends who played sports but didn't make it to the pros, and others who got caught up in gang life, were underrepresented in literature.

Being a writer, he says, lets him tackle these subjects with nuance in ways others can't.

"There's no shortage of rappers who are telling these kinds of stories," says Jackson. "However, there's an immense pressure on rappers to tell a hackneyed or in some ways, clichéd story about the urban – I hate that word urban – experience.

"Authenticity is important to me because I don't want those people I write about or those stories to be underrepresented."

This speaks to the larger issue that people of color lack representation in the publishing industry, he says.

The problem was never more apparent to him than when he attended an annual fundraising gala for the Center of Fiction in New York. Jackson says the cost of a plate ranged from $600 to $25,000.

Many major players in the publishing industry were in attendance. While taking the elevator, he says he would hear conversations about things like trips to the Hamptons. One person told him that people pay $300,000 a year to be members.

Jackson also noticed that there were no Black people at the gala.

"Wow, I can see why it would be so hard for a person of color to crack through this because we're not represented here," he says. "From a business level, we're not really the decision makers in the publishing industry.

"If one of us doesn't push through we lose those stories."

By coming to speak at places like SEI, he hopes to inspire youth to continue pushing through that door.

First and foremost, he encourages kids to simply tell their stories.

If people don't have a relationship with language, it's hard to communicate what they're going through, says Jackson.

He doesn't remember anyone coming to give him that talk when he was an SEI kid over 20 years ago.

"I wasn't a reader," says Jackson. "I had the same dream as everyone else. I was at the Salvation Army trying to work on my three pointer, while everyone else, my contemporaries, were holed up their rooms trying to write a short story."

Despite his basketball focus, Jackson was always a good student. His teachers would tell him he was a talented writer, but he didn't consider how to apply that skill into a career.

To this day, he says he was "one of the greatest" when it came to writing love letters in elementary school.

He moved around a number of different schools in the Portland area before going on to play junior college basketball.  When the pro athlete dream ended, he earned an academic scholarship to attend Portland State University (PSU).

While at PSU, he got into petty drug dealing. He got caught and served 16 months in prison.

Since Jackson had a number of family members and friends locked up, he says it was like a rite of passage.

Ultimately, he says, prison didn't rehabilitate him. Instead, he just decided he didn't want to live that life anymore.

Jackson considers himself lucky. He says he wasn't a drug kingpin, but the amount he got caught with could've landed him in prison for 10 years.

The economy is now dependent on the war on drugs, he says.

"The population of prisons keeps going up and they're getting all of this cheap labor," says Jackson. "I don't think the government is truly set on eradicating drugs from the inner city. Too many businesses are thriving and political structures are thriving. And who are they losing? The Black men. They don't care."

Jackson makes it clear that a drug conviction can ruin someone. He wasn't able to get a number of jobs because of his criminal record. In addition, he wasn't given the chance to have that record expunged.

Jackson hopes this message will get through to SEI kids.

In addition to speaking at SEI, Jackson will be appearing at "This is What it Means to Say Portland" at the Someday Lounge on Nov. 10. For more info, go to http://www.mitchellsjackson.com/.