By Lisa Loving of The Skanner News
Published: 29 October 2012 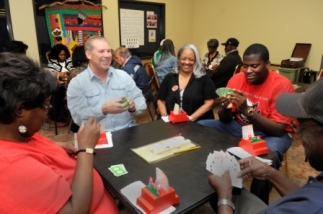 The American Bridge Association (ABA) is launching a new membership drive and they're looking for interested card players of any age.

While some people might still think contract bridge is for old people, these are the important things to know: Competitive bridge is considered by many to be a sport; it's played all over the world; and some people make a good living from it – or even just a little cash on the side.

In Portland, the Challengers Bridge Club – a local chapter of the American Bridge Association like those in Seattle and Tacoma – is recruiting new members to grow their community and raise the bar for local card-playing talent. The inclusive, multicultural club is open to all. Dues for a one year membership are $62.

Considering how many regional, national and international tournaments there are, and the knife-edged skill of some players – even James Bond played bridge -- the truth is that the game is pretty exciting.

"Also it affords you the opportunity to travel – I travel all over the country attending bridge tournaments and I meet people from all over the United States.

"I can go to almost any big city, and go play bridge with someone that I've met at a bridge tournament," Polk says.

The ABA is one of the oldest bridge organizations in the country, founded in 1932 in Virginia by a group of Black players who were excluded from events at the time.

Today however, ABA members join and play with other bridge groups nationally and internationally.

Bridge is a partnership card game de­rived from the 16th century game "whist."

For those who may not know, contract bridge is played with a regular deck by two teams of two players. As explained by Wikipedia, "The game consists of several deals each progressing through four phases: dealing the cards, the auction (also referred to as bidding), playing the hand, and scoring the results."

For people who have never played it, watching a game is confusing; you have to learn by doing it.

"It's like old home week," Polk says. "We have two national tournaments every year—one in the spring and one in the summer, and it's like a family reunion every time we get together."

That's part of the reason the club wants to invite more people, Polk says: It's an important opportunity to learn a stimulating hobby that pushes players to learn more no matter how good they already are.

And everyone is welcome despite their age, race or background – the only prerequisite to playing bridge is a desire to learn.

"It's a game that you can play starting as a youngster all the way until your senior years," Polk says. "Always something new to learn."