Mylife.com Agrees to Be Up-Front About Costs in Washington State 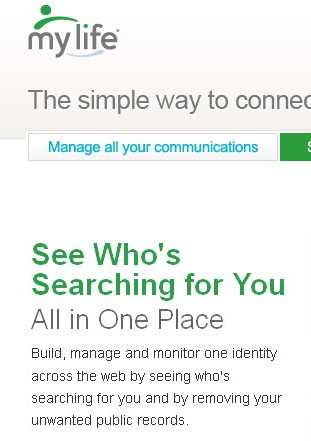 This just in from the Washington Attorney General's office:

"Go to MyLife.com, the Internet's leading people search site, just type in your name and see if someone is searching for you – for free," proclaimed a television advertisement for Los Angeles-based website MyLife.com. "It could be an old boyfriend," an attractive young woman with a laptop wonders aloud. But unfortunately, according to documents filed today by the Washington State Attorney General's Office, there was nothing free about MyLife.com's services.

"MyLife.com's commercials were misleading because, in order to reveal who was looking for you, a monthly subscription costing $12 to $20 per month was due," said Assistant Attorney General Jake Bernstein.  "MyLife.com's misleading advertisements for their 'Who's Searching for You' service did not reveal the person's name. It only revealed their age and location."

Bernstein added that consumers were also surprised to learn that after subscribing, they were immediately charged the full amount of their subscription rather than paying on a monthly basis.  Additionally, consumers' memberships were automatically renewed without the consumers' express permission.

Concerned that MyLife.com's advertisements violated Washington state's Consumer Protection Act prohibiting unfair and deceptive practices, the Washington State Attorney General's Office began an investigation in 2011. MyLife.com chose to resolve the investigation by agreeing to enter into an "assurance of discontinuance" — an agreement that obligates the company to abide by certain practices or face legal consequences.

According to the arrangement filed in Thurston County Superior Court, MyLife.com agrees to:

· Clearly and conspicuously disclose the amount that consumers will be charged or billed before collecting a method of payment – and disclose that subscription services will automatically renew.

· Obtain consumers' consent for a payment that renews automatically before accepting the first payment.

· Stop stating that the service is free – instead acknowledging that a purchase is required to access the promised information.

· Create a clear website disclosure about how the service works.

Violations of the terms above are a violation of the Consumer Protection Act, exposing MyLife.com to further litigation. The company also agrees to pay $28,000 in attorneys' costs and fees.