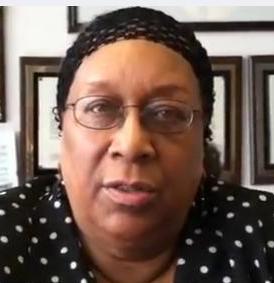 Educator Carolyn Leonard retired from Portland Public Schools this year. But she shows no sign of stopping work.

An internationally recognized scholar in multicultural education and civil rights, she has too many awards and accomplishments to name.  Leonard's philosophy?

"Everyone has a responsibility to make things better."

She certainly does her part. Nationally, she has served on the Executive Committee of the National Council for Black Studies. Closer to home, she has been chair of both the Metropolitan Human Rights Commission and the Oregon Commission for Black Affairs, as well as president of the library's Black Resource Center, based at the North Portland branch.

She's also made history, as chair of the committee that fought successfully to rename Union Avenue as Martin Luther King Jr. Boulevard.

"I grew up in Southeast Portland, and my family has been attending Portland schools for five generations," she says.

"My father was a math major and my mother went to college for two years, so that love of learning was part of my household.

"I have great grandsons who are in the school system right now. The schools are in desperate need of people who understand and care about public education."

Leonard is considering a run for school board, but she says board seats won't open up until either 2013 or 2015. So that's still just a possibility. She also would be willing to offer support to another candidate who will go to bat for all students.

"They have really difficult challenges," she says of the school board. "Sometimes it seems that the district is driving the board rather than the other way around. I don't see the courage that needs to be there. The district's decision to shut down The Harriet Tubman Leadership Academy for Young Women is a good example. How do you make an announcement that you are closing a school before the board has voted?

"Martin Gonzalez was the only board member who even asked questions," Leonard says.

For 30 years, Leonard worked to improve our schools, as a teacher, supervisor and consultant.

"I know where the bodies are buried," she jokes. And she does.

Numerous evaluations  of Jefferson High School, from 1968 to the 1980s, for example, turned up some ugly history. Leonard has witnessed superintendents come and go. And she's seen bitter battles over school closings, over reorganizations, over fairness – or lack of it. But even though she has disagreed with a number of policy decisions, throughout her career she has been a peacemaker.

For about seven years, in the late 1970s-1980s, Leonard ran a summer school through the Urban League. Fifty high school student tutors and 10 staff worked with 150 elementary students in a program that combined academics, culture and career skills.

"Kids learn best from those just ahead of them," Leonard says, adding that some of those students are now doing great work.

"I believe Karanja Crews was one of our  tutors," she says. "And Pastor Mark Strong was a team leader.  And Lorraine Graham, who started the Voices in Praise ministry, was a tutor."

This summer, Leonard helped create the three-week "Girls Lead Summer Camp" for former students of the Harriet Tubman Leadership Academy for Young Women. The school district closed Tubman as part of budget cutbacks, officials said, despite anguished protests from hundreds of students, their parents and supporters.

"The odds are they won't get their school back," she admits. "They did get cheated. But we want them to continue being leaders wherever they go, and to continue their interest in math and take all the science they can."

Tubman was the only all-girls STEM school in the state, proud of its strength in Science, Technology, Math and Engineering. In 2006-7 the school was rated exceptional. And the school was truly multicultural. The camp aimed to make this forced transition easier on the girls, and to affirm their value as ambassadors of STEM.

"We need this generation of children to see that math and science and media are important," she says. "So we had a three-week program focused on math, media, leadership and public speaking with the help of a volunteer from Toastmasters. We hope they will go on to be leaders who show that girls can do math and science."

Leonard says Tubman parent Jyothi Pulla, "has been incredible in recognizing the need for African Americans and Latinos to have the same quality of education as her daughters." Pulla, Leonard and others volunteered their time because, "that's the kind of dedication it takes to make change."


For Leonard, the conversation about education has to start with recognizing that every child is needed and valued. Every child should be made to feel welcome, wanted and worthy of the best education the school system can provide.

"I have believed for a long time that the under-education of any child on the planet is a loss to me personally," she says. "It doesn't matter whether that child is Black, White, rich, poor or whether they are in the United States or in China. Everybody has a purpose on this earth.  Everyone deserves the opportunity to achieve that purpose. If we educate all of our children, they will make a better world than we can."

She says she isn't one of those who think schools don't have enough resources to do their job.

"The reality is we know what it takes to teach the children; what we lack is the willingness to do it," she says. "I really believe that."

It's not about what you have, she says. Her interest in culture has taken her to Africa and Europe, Mexico and Canada, South America, the United Arab Emirates, Oman and Jamaica. What she learned is that humans learn in spite of living in very challenging circumstances.

"We have very little abject poverty in this country unlike in some other parts of the world," she says. "Human beings are incredibly resilient. So I'm not saying that we don't need to eliminate stress, just that it's not the whole picture.

"I've met people who grew up without any education until they were 10 years old – and they are brilliant. I've met people in other countries who memorized the dictionary because they didn't have books.  You don't have to be college educated to want your children to learn.

"I happen to believe that having faith and having a higher power is helpful. You can rise above poverty."

Teaching today is harder because students have a wide range of experiences and they are used to constant entertainment from television, cell phones and video games.

"All this repetitive noise that has no meaning causes the brain to develop in ways that make learning in school difficult," she says.

Classroom discipline has to be based on relationships, she believes. Good schools wrap their arms around troubled children, and find ways to give those students positive attention.

"You can't ignore the troubled child. The troubled child can be the one who drives drunk and it could be your child who is killed. They will be there on the playground, in the park or on public transit along with everyone else. There are no throw away kids.

"If we all understood the reality of the matter, there would be no child going hungry and no kid going without lap time."

Portland schools have to do better with English Language learners as well as with students of color, she says. And she worries that academically gifted children of all colors and backgrounds don't get the attention they need to truly excel.

"Public education has definitely got to deal with issues of race, but it also has to deal with culture, language and class. It's so important we don't deal with just one, without the others.

"It ought to be possible to take an algebra class in Vietnamese, or to take a biology class in Spanish. The year I worked with English language learners, we offered  several core classes in Vietnamese, Spanish and Russian, through Benson summer school."

Still, after all those years of devotion to the schools, it is hard to see public education under attack and Portland's schools struggling.

"I'm not against children going to private schools and charter schools, but there has to be a solid public education for everyone who chooses to attend or has no other option. Public education is needed to ensure that our country provides a venue or arena for diverse populations to learn, work and play together. You cannot effectively lead if you have no understanding of the issues and concerns of diverse populations."

Leonard is not a fan of vouchers, which she believes will hurt struggling families.

"People who are eking out a living – working full time, trying to take care of all their families needs -- how are they going to compete with people who enroll their children in Legos classes      at two years old?" she says.

"People with privilege and knowledge have to want the same education for every child that they want for their own child."