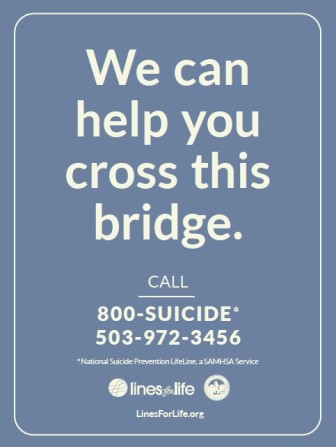 The growing number of suicidal people in Oregon has prompted local leaders to put up new public service signs for a local suicide prevention hotline, the Lines for Life crisis line.

First the signs go up at the Vista Bridge in NW Portland – a suicide hot spot. Then more will be posted on the approaches to other bridges as well.

Commissioner Amanda Fritz and Mayor Sam Adams won support at the city council for a resolution commending Lines for Life at the Wednesday Council meeting.

Two weeks ago Fritz proposed an ordinance calling for City funding of $150,000 for the suicide prevention hotline, which already operates 1-800-SUICIDE here locally and has a strong record in de-escalating suicide calls; the extra cash will pay for more staff to supervise and answer the hotline.

Lines for Life is staffed by professional counselors trained in suicide crisis de-escalation. The service has another local number, 503-972-3456, for smartphone users.

"We know that there is more that we can do to de-escalate encounters with people in these situations," Adams said in a statement. "Matching people in need with professionals best equipped to handle these scenarios is a first-but-important step."

Adams and Fritz say they have worked for months to address the growing suicide problems, particularly with LGBT youth and the faith community.