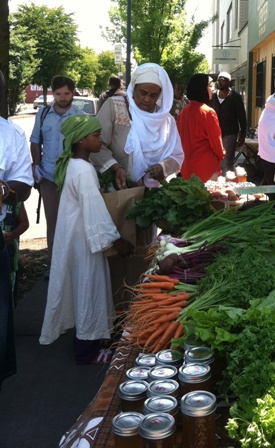 Putting healthy food on the table is a struggle for many of these families.

"It helps whittle away at the two prong food system," says Trudy Tolliver. "There is, in some people's minds, a theory that wealthier people can eat fresh food while less wealthy people eat processed food. This helps to break that down pretty significantly."

Since its birth in the King neighborhood market in 2009, Fresh Exchange has expanded to other markets and seen a significant increase in shoppers.

With the recent opening of a market in the Kenton neighborhood, even more shoppers will have access to the program.

SNAP benefits are distributed through Oregon Trail Cards, which work like debit cards. Portland Farmers Markets debit the cards in exchange for $1 tokens that can be used at vendor stalls.

Tolliver says that the program is both beneficial to shoppers and vendors.

"A lot of the vendors, farmers in particular, who in many instances are low-income themselves, have more funds because they are making more sales," she says. "It puts fresh food on peoples' plates and money in farmers' pockets."

According to their statistics, the Portland Famers Market has seen roughly a doubling of SNAP shoppers in the last year. The increase has been most dramatic in places with an exchange program.

Tolliver says the increase of usage in each market, since the program's inception, highlights the necessity of Fresh Exchange.

2.3 percent of customers at the King neighborhood market were using SNAP cards in 2009. Now, over seven percent are using SNAP.

The Northwest Portland Farmers Market only had 1.75 percent using SNAP last year. Since they started matching this year, there are now over 12 percent using SNAP. Tolliver says this market is really popular for seniors.

Tolliver says people can help the program expand by telling their friends and donating, if possible.

"It's great just to spread the word that if people know anyone who is a recipient of SNAP benefits, let them know they can bring their SNAP card to pretty much any Famers Markets in the region," she says. "Talk to your friends."

"For those who are not using SNAP, consider helping out a neighbor or community member who does. They can make a donation to the Portland Farmer's Market Fund and help people increase their buying power and help farmers sell more produce."

For more information on Fresh Exchange, go to the Portland Farmers Market website.