By Helen Silvis of The Skanner News
Published: 13 September 2012 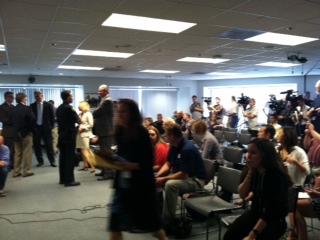 A Department of Justice report has concluded that the Portland Police Department violated the civil rights of people with mental illness by engaging in patterns or practices of using excessive force.
Assistant U.S. Attorney General Thomas E. Perez explained the findings at a press conference Thursday morning at the Justice Center in downtown Portland, flanked by U.S. Attorney Amanda Marshall, Mayor Sam Adams and Portland Police Chief Mike Reese.
"..we have concluded that, while most uses of force were lawful, there is reasonable cause to believe that PPB is engaged in a pattern or practice of using excessive force against people with mental illness, or those perceived to have mental illness," Perez said.
"We found that encounters between PPB officers and persons living with mental illness too frequently result in a use of force, or in a higher level of force than necessary." 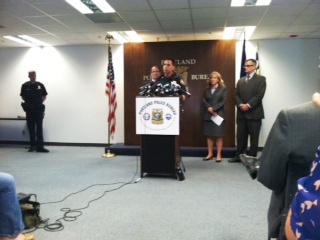 Excessive Taser Use
"We further found that, when dealing with people with mental illness, PPB officers use electronic control weapons, or tasers, in circumstances where the use of tasers was not justified, or deploy them more times than necessary.
"Finally, in situations where PPB officers arrest people with mental illness for low level offenses, we found that there is a pattern or practice of using more force than necessary in these circumstances."
Perez said the violations were partially connected to the broken healthcare safety net, and Oregon's failure to provide community care to people with mental illness. Often police officers had just two choices of where to take a mentally ill person: the emergency room or the jail.
Portland is not unique in its problems Perez said. Police officers have a more difficult job than in the past because of the number of mentally ill people on the street without support or resources.
But he also held the police bureau accountable for poor policies, training and supervision.
Perez praised the mayor, the police chief and the community for being willing to work to repair the problem without waiting for the results of the report. He noted that some of the recommended changes already are underway. One example is that the police bureau has appointed an inspector to look into all use of force incidents.
Mayor Adams pointed to the lack of community-based services for people with mental illness, and praised police officers for trying to do their best in very tough situations.
"I'm pleased that the report found most uses of force we reviewed were constitutional and that 'many of the systemic and many of the current deficiencies discussed in the letter occurred prior to the current PPB administration'." And I agree that we have an improvement-minded chief of police that is very well situated along with his management team and this Portland Police Bureau to move forward on solutions."

Racial Profiling and Civil Rights
Perez also noted that since launching the investigation in mid-2011 he has heard from communities of color.
"While we did not make any formal findings regarding these additional concerns, it is impossible to ignore the tensions that exist between PPB and certain communities of color in Portland," Perez said.
"Last year, Mayor Adams noted that one reason he welcomed our presence was his hope that this would lead to improved relations between PPB and Portland's communities of color.   We heard consistent and serious concerns from across the city that members of this community, particularly the African American community, believe that they are subjected to bias stops and force based on their race. Although these tensions predate Chief Reese's tenure, they persist to this day."

The Skanner News asked U.S. Asst. Attorney Thomas Perez why there was no separate investigation into racial bias and civil rights violations.
Perez said the remedies proposed to reduce excessive use of force against people with mental illness should also help address the concerns raised by communities of color.

Recommended Actions
Adams, Perez  and U.S. Attorney Amanda Marshall have all signed off on a Statement of Intent that gives details of a settlement reached between the City and the U.S. Department of Justice.

The City "does not concede that there is a pattern or a practice (of violating civil rights of mentally ill people), however, this is an issue of great concern to the City," the statement reads. "We have agreed to enter into a settlement to resolve the findings and to move forward."

The city has agreed to act in five areas:

Use of Force: The city agrees to revise its policies, create better policy on taser use and guide officers on how to de-escalate "encounters arising from non-criminally related well-being checks and arrests for low-level offenses."

"The City also agrees to lead efforts to increase community mental health treatment options, such as through the establishment of a 24-hour secure drop-off and walk-in center…"

Misconduct Investigation: The city agrees to take steps to speed up investigation of complaints. While the statement is vague about how this will happen, the report is highly critical of practices such as, allowing officers 48 hours before interviewing them after use of force incidents; and allowing officers to avoid writing down what happened immediately after each incident.

The report recommends allowing the DA to question officers immediately after a use of force incident. And it says the drawn out process of investigating officer misconduct undermines disciplinary actions.

Community Engagement and Outreach: A community body will be formed to assess progress on the recommendations, and advise the mayor and police chief on how to improve community realtions. It will include representatives from people with mental illnesses, mental health providers, communities of color, faith communities, and youth groups.

Adams, Reese and Commissioner Dan Saltzman asked the Department of Justice to review Portland police's policies and procedures after the fatal shooting of Aaron Campbell on Jan. 29, 2010.  Campbell, a young African American father, was in the midst of a mental health crisis following the death of his brother that same morning. His death sparked widespread outrage and demonstrations.
Other high profile cases that prompted the investigation include:

The Portland Police department has released reports on five cases referenced in the DOJ report. Find them here.