By Helen Silvis of The Skanner News
Published: 11 September 2012

Property and violent crime fell by 25 percent between 2000 and 2010. Yet, unless state corrections policies change, Oregon is on track to add 2,000 more prison beds over the next decade, at a cost of $600 million. That's on top of the existing $1.4 billion corrections budget.
Last Saturday, Oregon Attorney General Ellen Rosenblum signaled she is prepared to back major revisions to sentencing guidelines, including those mandated by voters through Measure 11 in 1994 and Measure 57 in 2008.
"Nothing – Nothing is sacred," Rosenblum told a statewide gathering of the Partnership for Safety and Justice in Keizer Oregon, Sept. 8.   "All of our state's felony sentencing structure has to be on the table for review."

Sentencing is under Review
Calling the rising costs unsustainable, Gov. Kitzhaber last year tasked Oregon's Commission on Public Safety with reviewing sentencing policy. The commission is expected to issue recommendations towards the end of 2012, with draft legislation expected in 2013.


Research by the Pew Center for the States, found more than 50 percent of the expected rise in Oregon's prison population would constitute people convicted of property crimes (36 percent) and drugs charges (17 percent)(Pdf. file) . The same study shows that 66 percent of people imprisoned in 2011 were rated as low or medium risk, up from 55 percent in 2005. 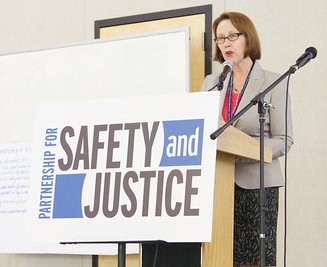 A Focus on Prevention
Rosenblum contrasted spiraling prison spending with cuts to victims' services. More than 20,600 requests for emergency shelter from victims of domestic violence were turned down in 2011, for example.
"We need to invest in life-saving services for victims, not only because it's smart spending, but because it's the right thing to do," she said. "We need to lake a long hard look on how we're spending our public safety dollars. Let's begin with a focus on victims' services, re-entry programs and substance abuse treatment.
"In my view we should all be focused on shifting our public safety spending to prevention-based strategies, such as victims' services, addiction treatment and recovery, and re-entry programs," she said. "After all last year 4500 inmates were released from prison. Where are they all going? Are we taking care of them and making sure they aren't going to be back in prison in six months?
"Evidence-based law enforcement strategies, prison programs, including mental health treatment and vocational programming: We need to prepare people to succeed when they return to the community. We need to help people rejoin society and not live a lifetime on the fringe."


Robert Perkinson, author of Texas Tough: The Rise of a Prison Empire on the collapse of rehabilitation

Rosenblum defeated Dwight Holton in the Democratic primary election. She was appointed by Gov. Kitzhaber to serve out the term of AG John Kroger, who resigned June 29 and is now president of Reed College. Rosenblum will face Republican AG nominee, James Buchal, in the November election.

Campaign: "Stand Strong for Safety and Savings"
About 120 people attended the Partnership for Safety and Justice event. The group brings together victims of crime, people who have committed crimes, and their families, to advocate for a prevention-focused approach to public safety.
The group has just launched a new campaign called "Stand Strong for Safety and Savings."  It will seek to end mandatory minimum sentences, give judges more discretion, and re-focus spending on programs that have been proved to reduce offending, such as prevention and after-prison programs.
PSJ also seeks to mandate that young people are placed in youth facilities not in adult jails. Some counties, for example, Multnomah and Clackamas, already have this policy, but in other parts of the state, youth routinely end up in adult prisons.
"We have an incredible opportunity in the next 10 months to pass historic changes to the criminal justice system, David Rogers, PSJ's executive director, told supporters. "We could begin to see a much smarter approach to reducing victimization and crime."

Sentences are Now 36 Percent Longer
National research by the Pew Center has looked at the costs and benefits of lengthy sentences. "Time Served: the High Cost, Low Return of Longer Prison Terms," crunched numbers from across the country and found prison sentences have increased by 36 percent.  Longer sentences have contributed to the decline in crime during the 1990's, the report says, and probably can be credited for between a quarter and a third of the drop.
"But criminologists and policy makers increasingly agree that we have reached a "tipping point" with incarceration, where additional imprisonment will have little if any effect on crime…
"Research clearly shows there is little return on public dollars for locking up low-risk offenders for increasingly long periods of time and, in the case of certain non-violent offenders, there is little return on locking them up at all."
The report notes that the 17 states which have cut prison sentences, also have seen crime fall.  And the researchers point out that we now have evidence-based programs that prevent and reduce criminal behavior. (Pdf. file)


"…there are more effective, less expensive ways to handle non-violent offenders than lengthy spells of incarceration…"
Efforts to rein in costs and reduce the negative effects of prison, which can include increased criminal behavior, have brought together policymakers from across the political spectrum. Republicans, Sen. Jackie Winters and Rep. Andy Olson sit on Oregon's Commission on Public Safety alongside Democrats, Sen. Floyd Prozanski and Rep. Chris Garrett.

Foes Launch Ad Campaign
Significant opposition is expected, however. Not everyone agrees that reducing prison sentences is necessary and safe. Steve Doell, a co-founder of Crime Victims United and the Anti-Crime Alliance, which helped create Measure 11 and Measure 57, has created a new group called The "Truth in Sentencing Project."  Doell's group has launched a radio campaign in support of current sentencing policy. The ad says that 70 percent of people in Oregon prisons are there for,  "violent crimes and serious sex offenses including felony assault, armed robbery, kidnapping, manslaughter, child molestation, rape, attempted murder, and murder."
A factchecking investigation by Politifact, concluded that 65 percent of people in jail are there for crimes that can automatically be considered violent. That finding, however, draws no distinction between a person who drove a getaway car during a robbery and someone who threatened a cashier with a gun, if both are convicted of robbery.
Read:  How One Oregon Girl Became a Measure 11 Felon


Correction: This article originally underestimated attendance at the  PSJ gathering. David Rogers supplied the actual number of 120 people who signed in.