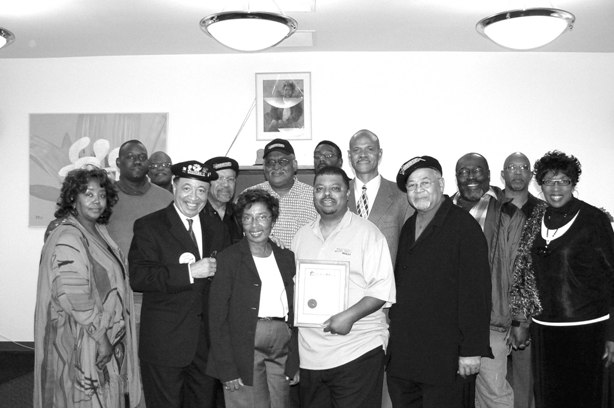 Starting out with no official office and no budget, the Portland chapter of the National Association of Black Veterans is officially open. The association will place an emphasis on helping Black veterans and their families navigate the numerous benefits available from the Veteran's Administration.
Chapter president and founder Leneld Brown, a retired Lieutenant Colonel of the U.S. Army Corps of Engineers, said he started the chapter after seeing a need in the African American veteran community.
Working through the red tape of the Veteran's Administration can be a daunting task for a service member who has been out of the military for a while, Brown said. While veterans are briefed on the process to file a disability claim when they leave the military, many often forget the details as they progress on to civilian life.
"For the normal veteran, it is awfully, awfully tough (to file a successful claim)," the Vietnam veteran said. "Most of them just give up."
When Brown was with the Corps, he had plenty of opportunity to work with policy-makers in government. Working in the chief engineer's office in the Pentagon, Brown said he often stood behind his superior officers as they justified construction projects to members of Congress.
While the association focuses on issues of Black veterans and their families, Brown said the organization exists to help all veterans from every branch of service. The newly formed chapter has about 20 charter members from World War II and Korea to Vietnam and Iraq.
Harvey Brooks, region one commander, who granted the Portland chapter its charter, said a real need exists for trained veteran's service officers. He said many veterans need the officers to argue on their behalf in order to help process a successful claim. Moreover, Black veterans continue to experience institutional discrimination, said Brooks, who is retired from the U.S. Air Force.
"We help all veterans, but place a special emphasis on people of color because they have been short-cutted," he said.
Both Brown and Brooks said they are also encouraging veterans to seek help even if they think an affliction may not be related to their service. Veterans can suffer many disabilities from their time at war, including Post Traumatic Stress Syndrome, the after-effects of Agent Orange and problems associated with depleted uranium ammunition being used in current conflicts, said Brooks.
"Some veterans didn't realize they had problems (associated with their service)," Brooks said.
Brown said many more don't realize they may qualify for benefits. A veteran himself, he said he would often ignore his disabilities.
"I had things that ailed me that I didn't think were disabilities," Brown said.
Submitting a claim with the help of a service officer can be relatively simple, said Brown. First-time applicants will fill out standard paperwork and describe the problems they are experiencing. The association will then investigate the validity of the claim, in part by reviewing the medical records of when the applicant was in the service. If a claim is rejected, Brown said the association would fight the appeal if it feels it is a legitimate disability request.
"We have checks and balances to review claims," he said.
As the conflicts have changed, so have the requirements for disability qualification, said Brown. What may not qualify as a disability this year, could spell relief in the next. And the association plans to make out-of-office visits to veterans, so the process is easier for both homeless vets and those with mobility problems.
While medical care is a top priority for many vets, the association can assist with other services: education, home loans, survivor's benefits and others.
"When you go to war, I don't care what war, it has repercussions," Brooks said.
Brown is looking for office space for the newly formed chapter of the National Association of Black Veterans and plans to hold monthly meetings. For more information about veteran's assistance or to become a member, call Brown at 503-569-0964 or email at leneld@msn.com.
Charter members include President Leneld Brown, Jerry Andrews, Willie Burnett, Pierre Duboise, Rodney Graves, Daniel Johnson, Harvey Lockett, Edward Williams, Jesus Zarate, Marshall Richmond, Eric Spears, Bernard Foster, Shirley Minor, Clarence Banks, Charles Minor, Washington State Commander Lloyd Burroughs, Region 1 Commander Harvey Brooks, Region 1 Manager John Stewart, Tacoma Commander Ken Watts, Program Manager Preston Hail, Darnell Norfleet, Thomas Brown and Charles Sampson.