By Helen Silvis of The Skanner News
Published: 31 August 2012

The Multnomah Youth Commission's anti-violence initiative has been granted $99,996 to expand its work. The grant comes from State Farm's Youth Advisory Board, one of 68 service-learning projects to receive a total of $3.9 million.

"We're all very thankful to have this support from the community," said Ana Meza, a founding member of the Youth Against Violence group. "This takes a lot off our shoulders; we don't have to think so much about how to raise money. We can focus on developing our vision for the summit and doing a lot of planning.'

The grant will help: fund the summit, support youth leaders to work on projects, print 300 copies of an action plan, and hire three youth to work on Restorative Justice in schools.

Giving Youth a Voice
Young people have a crucial perspective to bring to policy decisions, the group believes. They understand realities affecting teens that older people may not consider. So listening to the youth voice makes for better policy decisions. YAV spent months reaching out to young people in schools and youth clubs, holding focus groups across the city. Meza and several other youth commissioners have been continuing that work this summer. A Focus Group at Jefferson High School Aug. 28 looked at how guns and violence impact students.

"I'm so proud of them all," says Marc Fernandes, youth development coordinator with the commission. "They did their job in terms of going out and talking to young people. They never claimed to be experts and they never claimed to be the ones most affected by violence. But they knew they needed to get youth opinion, and to get a youth voice into policy decisions.

The grant will help pay for the venue, food and eight buses to help youth attend the 2013 summit. But that's just a small part of what the group hopes to achieve with the grant.

Are You Experienced?
In the months leading up to the summit, the group will be seeking out youth leaders who have personal experience or knowledge of the types of violence they heard about through the focus groups. Grant money will be available to support them with any resources they need, such as money for transportation, food and supplies.

The youth leaders who come forward will be encouraged to develop projects and take leadership roles, through this fall and during the 2013 summit. You don't have to be a student to take part, but you do have to be under-21 to be a youth leader.

"It's exciting. We're all just too excited about this coming summit," Meza said. 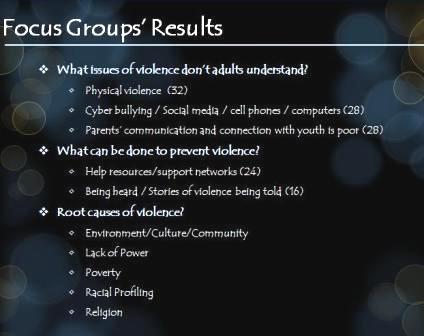 More support for the partners and families of gang members

Confidential space for youth to talk about gang involvement

Building pride in distressed neighborhoods through efforts like the Rosewood Initiative

A complete list of the policies recommended by young people who attended the 2012 summit is posted online, and will be printed in the action plan.

Youth Leaders are Needed
The YAV group says they hope schools and youth organizations, such as the Sexual Minority Youth Resource Center, Self Enhancement Inc., and the PAL Eastside youth center, will help identify youth leaders and projects.

"I think it's going to be hardest to find youth leaders in the area of home violence," said Hayley Turner. "School bullying will probably be one of the easiest because it's very common and people are willing to speak up about it."

Fernandes says he hopes that adults who support youth dealing with violence will bring those young people to the table. Outreach workers, for example, may be the adults best placed to identify youth who want to take the lead on combating gang violence.

Some of the grant money will go to training students in Restorative Justice. Focused on reconciliation, repairing harm and restoring peace, Restorative Justice treats student misbehavior as an opportunity for learning and growth. School districts, including Portland and Parkrose, have adopted Restorative Justice as a way to prevent criminalizing students – particularly students of color who are overrepresented in school suspensions and expulsions.