By Helen Silvis of The Skanner News
Published: 24 August 2012 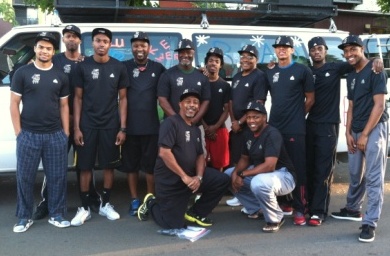 UPDATE: The Soleful Brothers took 4th place in their division and placed 10th overall in the Portland to Coast speed walk. Look out for them to participate in other events this year and in next year's race.
"For us to come in so well on our first time out and having older members, that was good," said team leader Justin Johnson. "I can't wait till the next one. We're already talking about it. Next time we want to be first and this will just make us work harder."

For the first time ever, this year's Hood to Coast relay will feature an all-Black men's team, The Soleful Brothers.

"These brothers, they are doing a 10-minute mile," says Georgeanne Pierce, a walker with the Brothers' companion team, The Soleful Strutters. "They are athletes. They are in college. They do track and field. They are committed. And they are looking to take first place."

The Soleful Strutters, in their ninth year of the competition, aim to cross the finish line between 11 a.m. and noon, Saturday Aug. 25. The Soleful Brothers aim to finish the race an hour earlier. They say they are in it to win it.

"They're making history," said Leonard Lambert, a driver with the team. They're just thinking about walking, but it is good and it's sending a message. This is the world's largest relay race and every state in the country is represented, as well as other countries.

"It is exciting. I'm excited."

Both teams are out to raise awareness of the health disparities that affect African Americans. And they aim to inspire all of us to take improve our health through healthy exercise habits.

"We're trying to bring awareness to our community," Pierce says. "We've got to start helping ourselves. African Americans are more likely to battle high blood pressure, diabetes and a lot of other health issues. This is one way to start taking control of your life and do something about it."

The Soleful Brothers started when college student Justin Johnson told his mom, Tammie Swinson-Allen, that he wanted to join the Strutters in the Hood to Coast relay. Johnson enlisted a group of his friends— Benson High School alumni and coaches –and the team was born. The women raised $900 to pay for the Brothers' entry fees and team uniforms.

All athletes, the Brothers thought walking would be easy. But they soon found out that speed walking is not for the faint of heart.

"They have a new respect for walking," Pierce says.

The Soleful Strutters came together nine years ago and the group has been growing ever since. From May to August the Strutters train for the Hood to Coast. But they also train year round and take part in everything from the Portland Marathon and Half Marathon to the Bridge Pedal, as well as volunteering with the African American Health Coalition's Soul Stroll and Wellness Village events.

"If you have a team you are more committed to participating," Pierce says, "because now you are accountable."

Pierce says everyone in the group has seen health benefits. One woman has lost 40 pounds, she says.

"It's kept my weight down and it's kept my stress level at a minimum. And I'm a highly strung person." 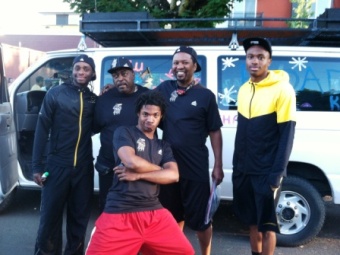 Three years ago, Doris Jones, who is 73, came in second in her age group in the Portland Marathon at a pace of 13 -14 minutes per mile. Jones trained with The Soleful Strutters.

The Soleful Strutters welcome everyone in the community to join their training sessions. Last week 40 people turned out to Jefferson High school for a yoga session, for example.