Fluoride in Our Water?

Unless we see a high-speed u-turn, Portland City Council will vote September 12, to add fluoride to our water supply. Three city commissioners – Randy Leonard, Nick Fish and Mayor Sam Adams already have declared their support for the idea, along with candidate Mary Nolan.

The council will listen to public comment Sept. 6, and there will be plenty of it. Feeling runs strong on both sides of the debate.

Those in favor say fluoridation is a low-cost, safe way to improve Oregon's dental health, considered the fifth worst in the nation. More than 200 million people in the USA, as well as 60 other countries, already have fluoridated water with no ill effects, they say.


In Favor
"There is not a single study showing that low levels of fluoridation cause any negative health effects," says Kylie Menagh Johnson,  spokesperson for the Everyone Deserves healthy Teeth coalition. "And it will lower tooth decay by at least 25 percent – in adults as well as children."

Almost any substance can be unsafe at high levels, advocates point out. Take Vitamin D, for example. It's essential to our health, yet an overdose can kill you. The National Food and Nutrition board classifies fluoride as a nutrient at the right level, beneficial to our dental, and possibly bone health.

Against
None of this sways fluoridation opponents who are taking to the streets- and the Internet -- to press their concerns. They held rallies outside City Hall Aug. 21 and 22. A petition on the website Change.org has gained more than 2000 signatures. And they say they will launch an initiative petition to ban fluoridation.

Opponents say the mineral is a toxin that can damage health, and putting it in our water amounts to medicating us without consent. They also raise red flags about the impact on our environment.

"We have some of the best drinking water in the country. Don't mess with it," says Kim Kaminski, executive director of Oregon Citizens for Safe Drinking Water, one of several anti-fluoridation groups in Oregon. "If we really want to protect children's teeth there are much better ways to achieve that goal without putting toxic waste into our drinking water. The problem is not fluoride. The problem is that people don't have access to dental care."

Both sides argue that fluoride in our water is also a social justice issue.

Dental Pain
Fluoridation advocates point to statistics showing that Oregon's dental health is at crisis point. Toothache is a leading reason for children – especially poor children of color—missing school days. More than 35 percent of Oregon children have untreated decay, compared to 15 percent in Washington. And one in five have rampant tooth decay, which is seven or more untreated cavities.

They say fluoridation, which would add 0.7 parts per million to our water, would cut tooth decay dramatically without posing any danger to health.

Jim Smith, a dentist who volunteers for Mission of Mercy and Give Kids a Smile, sees hundreds of people every year who don't have access to affordable dental care.

"I see particularly with underserved populations and people of color, the lack of fluoride has a much more devastating impact," he said. "If you lose teeth at an early age, they are not coming back."

Vancouver vs Portland
Smith volunteers in Vancouver, Wash., where the water contains fluoride, as well as in Portland where it does not.

Rotting teeth don't just cause pain and suffering, he says. The social effects can be severe. Who's going to hire you if you can't smile?

Oral health in the State of Oregon is getting worse," he says. "We're in a crisis and this doesn't have to go on."
Supporters
The group that successfully lobbied for fluoridation, persuading Leonard, Fish and Adams to come onside, is the health policy nonprofit, Upstream Public Health. Upstream brought together the "Everyone Deserves Healthy Teeth Coalition": 60 different groups that support the fluoride plan.

Just about every health group in the state has signed on, including the Oregon Medical Association, OHSU, Kaiser, Legacy, and Oregon Nurses Association. And a host of social justice groups are also backing fluoridation: The African American Health Coalition, the Urban League of Portland, the Coalition of Communities of Color, the African Women's Coalition, Asian and Pacific American Network of Oregon, the Latino Network, and OPAL Environmental Justice.

Fluoridation came about when health workers found that people in some parts of the country had a lot fewer cavities. It turned out that the difference was because those areas have fluoride in the water supply – naturally.

Fluoridation Foes
Nationally, the Centers for Disease Control counts fluoridation as one of the 10 most successful public health policies.  But opponents are equally adamant that fluoridation is a bad idea. The issue doesn't divide people neatly down the usual right-left faultline. Occupy Portland and some environmentalists are against the plan, along with conservatives and libertarians.

Opponents say they will seek to ban fluoridation with a statewide initiative. They'll have two years to collect 29,786 signatures, which must be handed in four months before a vote, which could come in either May or November 2014. Oregonians have voted on fluoridation four times in the past, rejecting it three times, reversing from Yes to No on one occasion. But the last time was in 1980, and we have 30 years of new voters since then.

How Much is Too Much?
Arguments against fluoridation focus on the dangers of too much fluoride. Excess fluoride has been linked to health risks such as loss of bone, kidney impairments, thyroid and endocrine disorders.

A Harvard study analyzed 27 studies of children in China. The studies, found that children living in areas where the water contained high fluoride levels, had IQ's half a point lower than others. The level of fluoride was three to 10 times higher than in fluoridated water.  But scientists say at low levels fluoride in water is safe.  The CDC this year lowered the recommended amount to 0.7 parts per million. Previously it had advised a range from 0.7 to 1.2 ppm.

If natural fluoride levels are above 4 parts per million the EPA requires water authorities to remove it from the water supply. The EPA also says states can adopt a lower standard of 2 ppm, to prevent fluorosis, visible white spots on teeth, which come from an excess of fluoride before the age of 8. 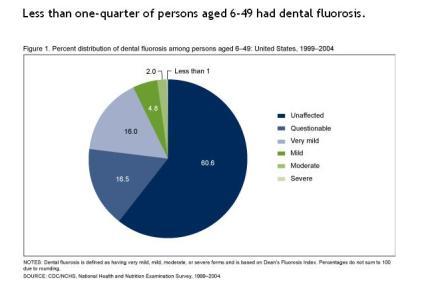 Safety
The CDC says it's safe to use fluoridated tap water in infant formula, but you can prevent fluorosis by breastfeeding infants or using filtered water. And when children start brushing their teeth, parents should make sure they use the recommended pea-sized amount, and don't swallow the toothpaste, which has 1000 times more fluoride than fluoridated water.

"This is about more than our teeth; it's about our whole body, all of our bodies," Kaminski said. "We're putting it in 100 percent of our water. We're bathing in it. We're brushing our teeth in it and we're watering our gardens with it," she said. "It's a one-size-fits-all health policy that is very detrimental to people with kidney impairments and other health problems."

Where the Fluoride Is!
Opponents point out that we now have fluoride toothpastes to protect our teeth. Hundreds of foods also contain some fluoride: from apple and grape juice, sodas and cookies, to wine and pot pies.

"How much is too much?" asks Mireaya Medina, a lifelong Portlander, now working in the social justice field. "I'm not sure it prevents cavities, because that's about people having adequate access to healthcare and dental care."

Medina is concerned about the impact of fluoridation on people with osteoporosis or kidney disease. She notes that a substantial number of people say they're sensitive to fluoride and suffer from stomach problems, rashes and other ill effects. She wonders if corporate interests are behind the push to add fluoride to our water. And she says governments shouldn't add chemicals to our water without asking us if we want them.

"I don't know if Fluoride is the answer—especially being forced on people. I would say it's a larger issue, that we should be demanding equal access to quality, affordable medical and dental care for everyone."

Flip the Switch
So why don't we just focus on brushing, flossing and going to the dentist?

Jim Smith says teeth brushing campaigns and information are already underway, but there are a lot of reasons why people don't go to the dentist. Dental care is expensive and many parents don't have time or energy to practice the best dental hygiene. So many children don't have adequate care now, it's unlikely to change unless we "flip the switch."

"It's very difficult to change people's behavior," he says. "We're doing all we can in those areas."

Smith says, he rarely sees fluorosis, and when he does it's invariably someone who grew up in Texas, Colorado, or another part of the country where fluoride water levels are naturally high.

Science of Mom
Alice Callahan, a Eugene-based mom with a doctorate in nutritional biology examined the research in her blog, "Science of Mom." She says the science shows the recommended levels of fluoridation are safe. And she says some anti-fluoridation groups promote junk science.

Answering the concerns of one poster on her blog she concludes,

"I am empathetic to the choice argument as well. However, there are plenty of examples where we have chosen public health benefits over choice. For example, we iodize salt to prevent iodine deficiency. We fortify grains with folic acid to prevent neural tube defects. One would have to go to a lot of trouble to avoid these "artificial" sources of nutrients in their diets (goodbye Cheerios!). I guess I don't mind giving up that choice, particularly knowing that those at greatest risk of neural tube defects and early childhood caries are the ones likely to gain the most benefit from these programs. Now if fluoride truly has safety concerns at current exposure levels, that's a different story. I just haven't seen real evidence that I should be worried."