By Helen Silvis of The Skanner News
Published: 16 August 2012

Asia's developing economies want coal: the United States has coal. And if coal exporters get their way, more than 150 million tons of it will travel through Portland every year. Residents of North Portland and St Johns could see the biggest impact, with as many as 5,300 barges and 11,000 coal trains traveling through or close to neighborhoods. And 700 of those trains would even pass underneath the homes of New Columbia.

"A lot of people will be interested to know that if this happens, their houses are going to shake rattle and roll," said Bonnie Meltzer a Portsmouth neighborhood resident who is organizing opposition to the plan. "One of the rail tracks goes into a tunnel that goes directly under new Columbia and comes out at Willamette Boulevard and Swan Island."

Activists are holding a "No Coal" rally from noon to 3p.m., Saturday, Aug. 18, at the railroad cut on N. Lombard Street at N. Gilbert, to draw attention to the plans and to the impact on surrounding neighborhoods. They point to a downside that includes: pollution, health effects, traffic slowing and a negative impact on Portland's ability to attract clean, green jobs. They're suggesting protesters wear black clothes to symbolize coal, and hand out black balloons and information.

Two full coal trains would travel under New Columbia every day, if plans to export through Coos Bay go forward. That's according to projections from the Sightline Institute, a sustainability research nonprofit. Sightline projects that 20 trains a day would travel along the north side of the Columbia River, heading to ports in Washington. Six more trains would cross the Columbia at St Johns and travel through the Northwest industrial area. 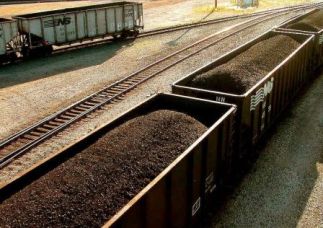 Each coal train will have an average of 125 cars and would be more than a mile long. Fifteen barges loaded with 1500 tons of coal would travel down the Columbia. Empty trains and barges would return by the same routes.

According to Sightline, the Burlington Northern Santa Fe Railroad has said that each car would leak about a pound of coal dust into the environment for every mile it travels.

The Alliance for Northwest Jobs and Exports, an industry-sponsored group, has launched a media campaign to persuade viewers that coal exports are desirable, because they will bring jobs and money. Coal companies Peabody Energy, Arch Coal, Cloud Peak Energy, Kinder Morgan and Ambre energy all are alliance members.

Portland companies Gunderson Marine and Vigor industrial, which have signed contracts to build coal barges, also joined the alliance, along with railroad companies and several unions. They say coal exports will bring 2,500 jobs to Oregon and Washington as well as millions in taxes.

"Powder River Basin coal, mined in Montana and Wyoming, is among the cleanest coal produced anywhere in the world," the alliance says on its website. "Strict safety and environmental standards ensure we can cleanly and safely transport it by freight rail to ports along the Northwest, creating jobs and tax revenue along the way."

"We don't gain anything," Meltzer says. "We gain a very few jobs and I bet if weighed up all the jobs scooping coal against all the jobs we will lose, we will gain nothing. It's profits for big coal and it's the destruction really of life as we know it in Portland and Vancouver. Just because it's natural doesn't mean it's healthy.

"We'll go from green to gritty."

Both the Port of Portland and the Port of Vancouver decided not to pursue coal contracts. And on Aug. 15, Grays Harbor, near Olympia, Wash., also abandoned its plan to export coal.

"We're focusing on other areas including grain, autos, steel and a variety of other bulk exports," said Josh Thomas, a spokesperson for the Port of Portland. "We have to consider the highest and best use for our terminals. Coal does not fit our definition of highest and best use."

However, the Port of St. Helens has signaled interest in the plans. So has the Port of Longview and other ports in Washington and Oregon.

Gov. Kitzhaber sent a letter to the Secretary of the Army, the U.S. Army Corps of Engineers, and the Secretary of the Interior, Ken Salazar, asking for a study to look at the full regional environmental impact of coal transports. Sen. Jeff Merkeley also sent out a letter with the same request. Kitzhaber lists concerns that range from health effects to economic issues.

"Since federal agencies will be making decisions whether to allow these projects to go ahead and, because the impacts of the projects cross state boundaries, it is the responsibility of a federal agency to step up and do this analysis," he concludes.

METRO councilor, Rex Burkholder said the council will consider a resolution, Sept. 13, that lays out concerns about coal transports. "It's about environmental justice, as well as about transportation and economics," Burkholder says.

"We have 50 crossings in our region. That could be three or four hours a day of trains crossing streets. And we move a lot of goods here. We are a major export city."

When potash trains blocked deliveries to and from the Columbia Sportswear warehouse in the Rivergate Industrial area, Burkholder said, the company considered leaving. The solution was a $16 million bridge, funded by the public.

Burkholder says the impact on the economy would be complex and may not add jobs in the long term.

"If they pollute the air then we can act, but it's too late," Burkholder told The Skanner News. "If our air quality gets dirtier, then to comply with federal regulations we'll have to start shutting down companies that pollute. INTEL may have to stop producing semiconductors.

"So there are a lot of ways that this could have an impact on our local economy and the health of our people."

The Sightline Institute has examined six different plans to bring coal from Montana's Powder River Basin, and has projected the numbers of trains and barges that would travel through the Columbia Gorge scenic area and along I84. Affected areas include: East, Northeast and North Portland as well as neighborhoods to the south next to the Willamette River. Outside of Portland, tribes also have voiced concerns about the impact on salmon treaty rights.

"There are two big concerns," said Clark Williams-Derry, research director for Sightline. 'One is the impact on the local communities. There's a lot of associated dust and particulate emissions. And the communities that are affected are poor communities and communities of color, which raises the issue of environmental justice.

"The second concern is just the volume of traffic. If suddenly you have 18 additional mile-long coal trains going through your town then that is a nuisance."

Laurie Hennessey, a spokesperson for the Alliance supporting coal exports, said all the companies involved are committed to safe practices. She disputed projections about dust pollution, saying that the Powder Mountain coal is cleaner than some other forms, and that each company will take measures to reduce dust. She also said it was too soon to make projections about the number of cars, and the impact on transportation.

"We're going to have a long conversation about this and the Alliance is going to be talking about how we're going to do this safely," she said. "We ship coal now, and we're not seeing problems," she said. "This would just be more."

Williams-Derry said coal burning in Asia also will add to global pollution – pushing mercury and other toxins into our air and increasing climate change.

"We have wind, solar, natural gas and other fuels that are far less likely to cause asthma," he said. "Coal's time has passed, and we should be doing everything we can to power past coal and invest in cleaner, healthier ways of powering our economy."

Hennessey took issue with that, saying that emerging Asian economies use coal and will get it from another, and possibly a less clean, source if they don't buy from America.

"The fact is there are people living in poverty who don't have access to power, and I think it's really arrogant to say, 'Just use another source.'"

The U.S. Corps of Engineers is expected to decide whether a full environmental review is needed sometime in September.