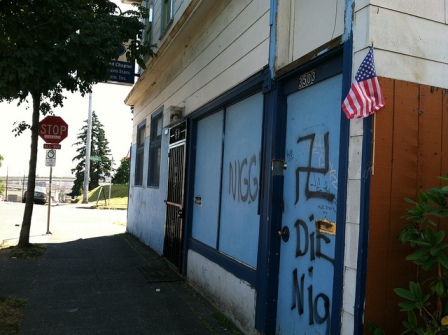 Tamping down an outcry over gentrification, the Sons of Haiti Masonic Lodge is looking for donations of all sorts of supplies -- from brushes to scaffolding -- to bring the North Mississippi Avenue community together with a painting party.

"Within the coming weeks we are going to bring the community together by repainting the whole building," said Raina Casey, whose husband is John Bryant, the Grand Master of the Sons of Haiti Masonic Temple.

She said her husband's organization was not included in the organizing of a solidarity event last Saturday night.

"We prefer if people are going to do something in relation to this building that they contact the Grand Master," she said. "We don't even want to focus on that at all."

Casey said the Portland Police, the FBI, and "all the city leadership has been supportive above and beyond," she said.

"We've decided to take this act of ignorance and make our community stronger."

Casey is asking for no monetary donations, but rather gift cards from Home Depot or Lowe's; painting supplies, scaffolding and ladders.

Casey says the plan is to repaint in a rust-colored orange hue, and that paint donations in that shade are welcomed.

"It is an ongoing criminal investigation," Portland Police bias crime detective Kevin Warren said Monday. "We recovered some evidence we're following up on, and hopefully we'll have a good resolution to the case."

The graffiti, which appeared early Friday morning on the venerable white clapboard building at North Mississippi and Fremont, included death threats, n-bombs and swastikas – some of which were backward.

Portland State University sociology professor Randy Blazak, one of the nation's top experts in white supremacy groups, said this week that he doubted the graffiti was sprayed on the Masonic Temple by a hate group – and that in fact, skinhead organizations have passed their peak years in the Portland metro area.

A founder of the PSU Coalition Against Hate Crimes – which helps local residents report and track hate crimes -- Blazak has spent decades researching skinhead and Nazi groups throughout the region.

"We work on a number of different levels," he said. "One is of course around the issue of when there are crimes, can we have good lines of communication to help solve the crime – so that's getting people to report crimes and getting folks feeling comfortable talking to the FBI and to the local police.

"The other side is getting education around the issue in the community -- so when a hate crime happens we want victims to know the resources available to them but also how communities themselves can best respond when something happens in their neighborhood," Blazak said.

"The good news is that the groups that had the most strength and the most appeal to young people in the Portland metro area have been on the wane for the past few years," he said.

"I really don't think this graffiti was done by members of these groups because the swastikas were backwards – and these guys practice drawing swastikas all the time," Blazak said. "If I'm a member of a neo Nazi group there's no image I am more familiar with than the swastika."

Blazak said research shows that most hate crimes are not committed by hate groups -- but they may be inspired by those hate groups.

Casey says the date for the painting party has not been set as yet, but that plans are for the event to fall before the memorial Day holiday so that young people can get involved.

Email her for more information at [email protected].