By Helen Silvis of The Skanner News
Published: 13 August 2012

CPR stands for Community Partnerships Reinvestment, but it's tempting to think of it more in the medical sense, as CPR for young offenders. Because, while it doesn't actually kickstart hearts that have stopped beating, it does seem to stop young men from throwing their lives away.

Run by Volunteers of America, with funding from Multnomah County's corrections service, the CPR program works with 18-25 year old men leaving prison. In Part Two, we share the stories of DeAndre Frison, who is a mentor in the program and DeAngelo Augustus, a recent graduate. Read Part One here.

DeAndre Frison is Portland through and through. He attended Boise Eliot Elementary school, Harriet Tubman Middle School, and Grant High school. But with no father in his home, a stressed mom, and a neighborhood where gang involvement was a fact of life, Frison took several wrong turns before finding his path to success.

"I went to juvie at 13 for assault and robbery," he told The Skanner News. "We were all out riding our bikes and a guy rode past on his bike. When one of my friends asked him for a light he said, 'I don't have time for you n*****'… so we beat him up. Somebody else took his bike, but because I was there I was also charged with robbery."

Once released from detention, Frison was placed in foster care. But he continued to get into trouble for "smoking marijuana, drinking, hanging out with friends, and not respecting the rules my P.O. wanted me to follow."

After working with Drug and Alcohol counselor Rhybon Mayfield, and entering a now-defunct all-boys program at Rosemary Anderson High School, Frison got back on track. He had a 4.0 GPA, he says, and was allowed to return home. But when he switched to Grant High School, he learned, "the alternative high school credits were only worth half a regular credit," leaving him several credits behind.

The disappointment sent the sophomore spinning back into trouble.

"I was in the office crying," he says. "Pretty much from there I just gave up…"

Frison started drinking and smoking again, and he stopped going to school, although he pretended to go for his mother's sake. It was practically a family tradition; his uncles were smoking crack, he says.

"I didn't have that male role model, that man who would show me another way," he says in retrospect. I pretty much just lost hope."

He took to selling drugs and, to avoid being robbed, carrying a gun.

"It came with the territory," he says. "You didn't want to be that guy who somebody picked on."

Frison admits he got away with a lot of bad behavior.

"After a while you feel, 'I can do whatever – which led up to me making a stupid decision to shoot at somebody," he says.

On a warm afternoon in 2005, Frison, now 17, and his girlfriend were on 33rd Avenue near Wilshire Park when a car of rival gang members, including someone he had a conflict with, drove up.

Afraid he and his girlfriend would be attacked, Frison pulled out his gun.

"As they backed up, I shot at the car," he said. "It was crazy. There was a picnic going on, two baseball games and two separate parties. Sixteen people witnessed it."

Fortunately for everyone involved, nobody was hurt. 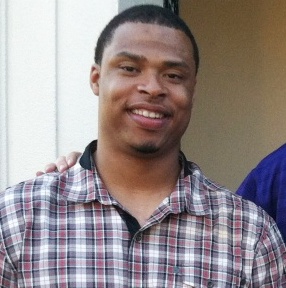 Frison fled to Washington. But he kept returning to Portland, and was soon arrested and charged with three counts of attempted murder and five counts of unlawful use of a weapon -- one for each bullet he fired.

Because none of the victims showed up at trial, the attempted murder charges were dropped. He was sentenced to serve a mandatory 60 months sentence.

Frison spent time in Eastern Oregon, Santiam and Mill Creek correctional institutions, and Oregon State Penitentiary. He was sent to maximum security, he says, after refusing to join an outside work crew. He felt it would be too difficult to be out in the world, yet still a prisoner.

Prison was horrible, he says.

"It was definitely an eye-opening experience. People took overdoses and died. There were fights, stabbings. I was done with gang banging, but I knew prison wasn't the time to make that decision and disassociate myself from the only people I knew."

When he was offered the chance to join the CPR program, Frison seized his opportunity. He worked the program for six months before his release in 2009, and for a year afterward.

For the first nine months he struggled to find employment.

"I went on so many interviews," he says. "I was 22 when I got my first job. The CPR program was always there for me. Counselors in the program advocated for me a lot. They helped me with food and clothing when I didn't have any money. They did a lot for me, a lot."

Frison completed a pre-apprenticeship training, graduating at the top of his class. That earned him his first job at Walsh Construction. Now a father, his construction career has allowed him to make a living and support his family.

But now he had another goal. Frison wanted to become a CPR mentor. The first time he applied he didn't get the job. This time, disappointment couldn't derail him, and in 2012, he was hired as a part-time CPR mentor.

"I love my job," he says. "I can reassure them because I've been through the same things they've been through. So I can tell them that as long as they put in the effort they will get positive things back."

Now Frison is thinking about his future. He'd like to go back to school and get the qualifications he needs to work with youth.

"That's when I made my bad decision," he says. "That's the most critical time in your life. You are easily influenced. So I want to be there to help them make good decisions and get on the right path."

DeAngelo Augustus was 16 when he moved to Northeast Portland from Atlanta. He found the move difficult.

"I was frustrated and angry for a number of reasons," he says. "I'd been uprooted from everything I knew. I didn't know anybody. I kept having run-ins with individuals and I didn't have the anger management skills to not just fly off the handle."

Despite having a supportive family, a girlfriend and a strong academic record – he had 27 credits as a sophomore – Augustus made a fateful decision. When some other students were bothering him he got hold of a gun and shot it over their heads.

"It was a scare tactic on my behalf," he says. "I thought that would put a stop to the problem."

DeAngelo was charged as an adult with Aggravated Attempted Murder and Assault II. He ended up going to jail for nine years.

"I don't have any hard feelings toward anybody—not the police, not the corrections department," he says. "It was not what they did that put me there. It was what I did. That was my choices."

With that rash decision, Augustus threw away his chance to fulfill a lifelong dream of becoming a U.S. Marine. Yet he says he's not 100 percent disappointed he went to jail.

"It helped me save my life because I could have been killed out here," he says. "It gave me the opportunity to find change and to get help, so I can be successful."

The Community Partner Reinvestment program, worked with Augustus in jail and after his release, to help him rebuild his life. He graduated in July, six months early because he already had achieved his goals.

Married and the father of a toddler, Augustus is now going to college with the goal of becoming a certified personal trainer.

He's been working, but now hopes to land a graveyard job by the beginning of next term.

"I'm open to anything and I'm a fast learner," he says. "Show me something once, and I'll learn it."