This is part one of a three part series on the crackdown on hip-hop in Portland. Part two will focus on the costs of security while part three will examine how the crackdown affects the growth of the industry, as well as how it factors into gentrification.

If you happen to be at a downtown Portland club on a Saturday night, you'll probably hear Drake, Rick Ross, or even E-40 pumping out of the sound system. However, if you want some local rap music, you'll have to see the artists in concert.

That is becoming more of a challenge as local venues increase the cost of putting on hip-hop shows or move away from the genre altogether. The hip-hop scene in Portland has been in a state of flux due to changing dress codes, security expenses and an ongoing rocky relationship with the City.

"You can't be anybody and throw a show in this city anymore," says Randal Wyatt of Speaker Minds.

The group recently performed their last show at Mt. Tabor Theater, one of the venues that has decided to move away from booking hip-hop acts. According to Wyatt, Speaker Minds had been performing regularly at the venue for eight to nine months without incident, yet has become a casualty of the negative characterization of the genre.

"I think they're kind of thinking from a general point of view that all hip-hop and all rap music brings out this certain demographic that causes problems," he says. "Venues need to take more responsibility for things they're promoting.

"You won't catch us with flyers with half naked women on them, or fancy cars, or anything provoking or promoting violence. We're not going to bring out people influenced by that sort of lifestyle. Our fan base is great. They just dance and go home." 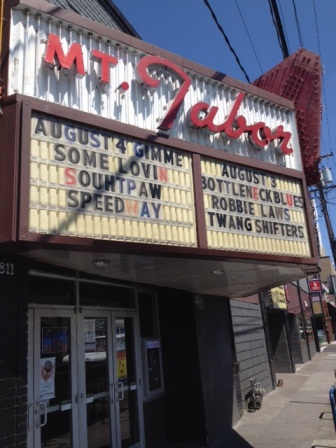 Benjamin Eshbach, general manager of the Mt. Tabor Theater, says hip-hop, along with heavy metal and horrorcore/murdercore music, is being eliminated because of the neighborhood and financial impact.

Although Mt. Tabor is one of the latest venues to take this stance, the hip-hop community, as well as the Black entertainment community as a whole, has been dealing with an ever-changing landscape for years.

In 1999, The Skanner News examined the pressure being put on the now defunct Cleo-Lillian Social Club by the OLCC and surrounding neighbors. Although the club had been a well-known gathering spot in the Albina Community since 1958, gentrification in the 90s brought a wave of complaints from new neighbors, who the owners believe brought racial hostility with them.

"The tactic's root, they say, stems from underlying racism."

In 2003, patrons at a Ringlers hip-hop show captured pictures of a police car parked outside with a large stuffed gorilla attached to the vehicle's grill, which sparked controversy over the racial overtones of the incident.

Two shootings outside of the Roseland Theater in 2006 prompted then Central Precinct Lieutenant Todd Wyatt to tell the Portland Mercury, "It's not a coincidence that all these shootings happen after a rap concert. We don't want to say that because we don't want to be labeled as racist, but if you line up the shows, and line up the numbers, there's a correlation."

Fast forward to 2012. Tensions between the hip-hop community, Portland police and the OLCC are still high.

The Beauty Bar was recently closed, prompting further frustration from local artists, including a commentary in We Out Here Magazine from Mac Smiff. The sense of frustration was accentuated in the comments section as different personalities weighed in on the racial patterns of who has been targeted.

"Different venue same story," says Jacque Dixon (who goes by the stage name J-Kronic) of the group Rose Bent. "Sugarcoat it. Make it look top 40 so we can bring in white people."

One of the most consistent complaints coming from members of the hip-hop community is about the change in dress code at certain clubs.

Most notably, there has been a crackdown on gang colors.

Jonathan Norman (stage name Smurf Luchiano), a longtime promoter and artist whose gang past is detailed in the cautionary documentary "Killingsworth", says the dress codes are fair, but does take issue with who they're being applied to.

"The dress codes are pretty fair with hoodies and no gang attire," he says. "So many people come to hip hop shows with hoodies on so you have to look at the demographics and where the shows are actually at. It's about freedom of speech and being an American citizen.

"With other genres it's a free thing. You can wear whatever you want to wear. Hip-hop is the only one I've seen with a strict dress code. All the way down to promoters. Then it starts to turn into a race thing. It's more like prejudice vs. fair."

Eshbach says the dress code is determined by the promoters.

"From the way they approach me, if someone can dress up and put on a certain style of clothing it shows they're a little more grown up and aren't going to cause problems," says Eshbach. "We want everyone to have a good time but at the same time some people's definition of a good time is different from someone else's. The dress code, from the way it was explained to me, it helps separate out riff raff. Troublemakers that aren't looking to have a good time but cause problems for somebody else."

Questions have emerged about how arbitrary these dress codes are and whether painting clothing decisions with a broad brush is the best approach.

Dixon, who is also a teacher at Roosevelt High School, says she sees the same approach used at clubs and bars in schools. She says the effect is discouraging to certain groups, rather than being something that prevents problems.

"It encourages counter cultures to stay at home or in their neighborhoods," she says.

Wyatt, who discusses subjects like the consequences of promiscuity and gang lifestyles, says doing research on artists is imperative.

"I know a lot of good people that threw events and their friends couldn't get in because they were wearing something blue," he says. "That's ridiculous. I wear blue all the time and I've never been associated with a gang. I just enjoy the color."

Next Week Part 2: The Name of the Game is 'Security'