Despite sweltering temperatures, dozens of kids packed into the N. Williams Salvation Army gym Saturday to engage with literature, health and wellness.  In many ways, the scene resembled the typical summer camp, with kids shooting baskets and parents and volunteers mingling by the bleachers. However, as soon as music started playing, it was clear that this camp would be using a different motivating tool, conscious hip-hop.

"The purpose is to engage the community young people with socially conscious hip-hop that is promoting health, fitness and education," says Journey to Freedom (JTF) CEO Karanja Crews. "We're infusing literacy with consciousness."

This summer, JTF is bringing hip-hop to the gym and the classroom with its Conscious Rap Boot and Book Camp. JTF is partnering with The Salvation Army, Educational Recreational Adventures, The Multnomah County Library and The Community Cycling Center to put on the camp.

The Bye and Bye, Dwell Realty and Motus Recruiting are also sponsors.

The boot camp is broken down into four sessions. Upcoming sessions will be held July 14, Aug. 4 and Aug. 11.

The first session featured catering by The Green Lady and a talk from guest speaker Stic.man of the group Dead Prez (Read our one on one interview with Stic.man here). 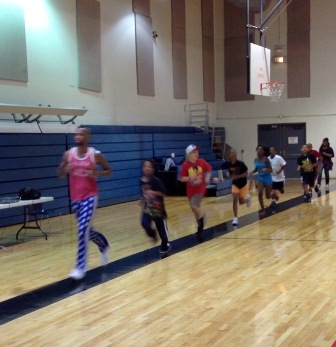 "What we lack is inspiration and motivation," says Stic.man. "Every 30 seconds on TV we see 'Supersize this.' Taco Bell everywhere. CrackDonald's and Murderking."

Following a conscious music warm-up activity, students were treated to a vegan breakfast, along with a testimonial from Stic.man.

He shared how his turning point came when he was 21 and starting to taste success from his music career. Stic.man says he was drinking too much alcohol, smoking too much weed, not exercising and eating an unhealthy diet. When he woke up from one night of hard partying, he found his left ankle was swollen. 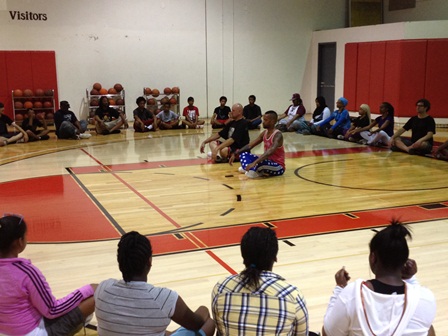 He was diagnosed with gout, which is a type of arthritis that occurs when uric acid builds up in the blood and causes joint inflammation.

"The doctor offered me a prescription for more drugs," says Stic.man. "He said that would take care of the symptoms and 'If you need some more, come holla at me.'"

At that point he decided to explore natural healing. Stic.man says he began exercising regularly and taking meat out of his diet.

Healthy lifestyle is something Dead Prez has incorporated into their music and activist work by creating the RGB Fit Club.

The RGB Fit Club has five principles, which are knowledge, nutrition, regular exercise, rest and consistency.

"Consistency overcomes everything," says Stic.man. "If you ask yourself (about) anything that you ever wanted to do and then ask yourself, 'How much time did I put into it?' the difference will be did it happen or not."

Following his lecture, Stic.man led the campers in a sample workout, which included push-ups, crunches, jumping jacks, stretching and burpees. He continued the workout with 15 laps around the gym, where all the runners had to line up single file and move in step with the person in front of them to simulate an old war ritual. When the campers were done running, he led them in meditation.

"It's a way to rest your thoughts," says Stic.man. "It's and active form of rest."

After the workout, the campers had a vegan lunch, where Wanda Abioto, the founder of The Green Lady, gave a testimonial.


She emphasized that healthy eating is part of loving one's self.

Abioto also shared how her mother fed her things like pork chops and steak. She says she loved her mother's cooking. However, her mother died of kidney disease after being given experimental medicine to deal with out of control blood pressure.

"You may not like the food today," she says. "You put so much sugar and salts into it you don't know what tastes like what."

"There will come a day when either you become ill, or your mother, your father, your sister, your husband or your child. I want you to remember this conversation."

Crews ended the day with a debriefing session, which included goal setting and reading assignments. He says the kids brought a lot of energy and seemed to have internalized the lessons.

"Today is the beginning of something great," says Crews. "A seed was planted about healthy eating and living, and living period."

Upcoming sessions will include a boxing workout, a 5k bike ride with the Community Cycling Center and a hike at the Columbia River Gorge.

For more information, go to www.journeytofreedomproject.org.