Who Owns Portland's New FBI Building? a Las Vegas Developer with a Colorful Past

The Skanner News would like to tell you what the FBI's brand-new $60 million building looks like inside. We'd like to tell you about the art – we hear it's wonderful. And about the sustainable features that developer Irwin A. Molasky says probably will earn it the U.S. Green Building's LEED Gold certification –right now it's at LEED Silver.

We'd like to tell you more. But we can't, because media are not allowed to enter the building. At the grand opening about 100 guests were offered tours. Reporters? Sorry. Not even without a camera.

But secrecy is not the only intriguing aspect of the FBI's move to Airport Way. For one thing, the government does not actually own the FBI building; it's leasing it from the Molasky Development Group, which also owns three other FBI buildings in San Diego, Minneapolis and Cincinnati.

But there's more. Irwin A. Molasky, the group's founder, has a colorful history that includes links to mob money, Hollywood and a 1994 racketeering investigation. Surprised?  There's more.  Another guest at the Portland event, married to a co-owner of The Molasky Group, served time for fraud, but now builds stunning  beachfront properties in Southern California.

The FBI Gets a New Building

Standing at 9109 Cascade Parkway, close to Portland International Airport and I-205, the new FBI building employed more than 1,000 different craftsmen and women -- an average of 150 people a day -- during the 16 months it was under construction.

"More than 80 percent of the labor came from the Portland area," said George Northcroft, Regional Administrator for the United States General Services Administration. "That is true economic development."

At 134,000 square feet, and four stories tall, the building brings together all the FBI's local staff, until now scattered in different locations.

"We can now work more efficiently and effectively having all our agents in one central location with many improvements, including tighter security and upgraded technology," said Special Agent Gregory Fowler.  During the last decade, he said, "We've learned who homegrown violent extremists are, and the damage that they do to our democracy. We have learned that strong law enforcement partnerships are the key to stopping such attacks. And we as an agency have learned that keeping our employees secure is the first step to keeping our communities safe."

Just in case you're thinking about trying to break in -- forget it. This building has 100-feet setbacks on all sides and a blast resistant concrete and laminated glass exterior. It's lit up by giant street lights and surrounded by a tall, spiked metal fence. And that's just the security you're allowed to know about. 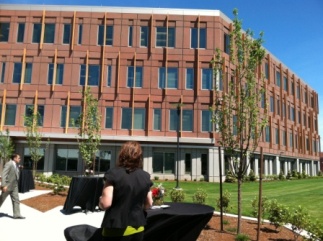 Speakers praised the FBI's dedication and values of loyalty, courage and integrity.

"The people at the FBI here in Portland have been absolutely fantastic to me," said Ruecker, who was an Oregon State Trooper before he went to work for the agency in Washington DC. "They are a fantastic group of people. Nobody deserves this more than the men and women of the Portland FBI." 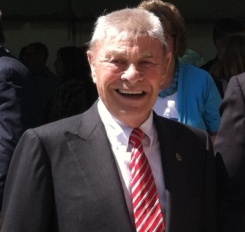 Irwin Molasky is now considered one of the most influential people in Nevada. His development company has built numerous projects in the Las Vegas Valley, from hospitals and schools to high-rises, shopping malls, exclusive resorts, and government buildings. A school is named for him and his wife Susan. So far, so respectable.

But early in his career, Molasky created Paradise Development in Las Vegas, Nev., along with three business partners including Moe Dalitz, whose mob ties are the stuff of legend. Michael Newton tells Dalitz' story in his 2009 biography, "Mr. Mob: The Life and Crimes of Moe Dalitz."

Molasky and his partners financed a hospital and later other deals with $100 million in loans from the Teamsters Union, which at the time was heavily involved with the mob. One of those developments was Rancho La Costa in San Diego County. 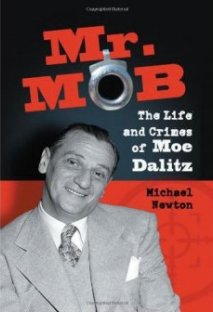 "In 1962, Dalitz, Molasky, Paradise, and two partners, Merv Adelson and Allard Roen, would snap up a total of 5000 acres outside the tiny San Diego County beach town of Carlsbad," Potter wrote in his June 2011 article about the San Diego FBI building under the headline, "Why Would the FBI Give $223 Million to This Man?"
"There, with funds loaned by the Teamsters and C. Arnholt Smith's US National Bank, they built Rancho La Costa, the posh resort that became synonymous with America's mid-century wave of organized crime, murder, and political corruption."

The resort became popular with Hollywood executives and wealthy golfers. But it also catered to Allen Dorfman, the Chicago insurance executive who managed the Teamster's pension fund; Frank Fitzsimmons who replaced Jimmy Hoffa at the helm of the Teamsters when Hoffa went to jail; and others with links to organized crime.

Meanwhile Molasky became a Hollywood executive. With Adelson, who later married anchorwoman Barbara Walters (twice), and producer Lee Rich, he formed Lorimar productions. Lorimar made television shows such as "The Waltons," "Dallas" and "Knots Landing" as well as the movies "Being There" and "An Officer and a Gentleman."

But in 1974, Penthouse wrote an expose under the headline, "La Costa: The Hundred-Million Dollar Resort with Criminal Clientele." The story claimed that the resort was a front for organized crime.

Molasky and his three partners sued Penthouse for libel, asking for more than $490 million in damages. In 1982 a jury decided in favor of Penthouse, but Judge Kenneth Gale declared a mistrial, and ordered a new trial. The $25 million trial was marred by allegations of corruption and backroom deals, leaving both sides bruised.

Three years later, the case was settled out of court. No money was exchanged, but the magazine's owner, Bob Guccione, issued a letter saying La Costa was an outstanding resort complex and praising all of the developers as civic minded philanthropists. Guccione went even further with Molasky and Adelson, saying the magazine did not mean to suggest that either man was involved with organized crime.

Seven years later, in 1992, Molasky was given immunity from prosecution in a failed racketeering investigation. The Las Vegas Organized Crime Strike Force was investigating The Computer Group, an organized sports gambling ring. According to the Las Vegas Review Journal, Molasky told a grand jury only that he had placed large bets with the group, which was not illegal.

Neither case seemed to hurt Molasky's career. He went on to work closely with casino-owner Steve Wynn, and to build some of the most prestigious projects in the Las Vegas Valley, including Park Towers luxury condominiums, Bank of America Plaza, Bank of the West and Hangar Seven at Paradise Aviation, part of McCarran International Airport. Over time, Molasky's four children entered the business, creating their own construction firms and adding to the group's portfolio of companies.
Steve Miller, a former Las Vegas City Council member and veteran broadcaster, writes the Inside Vegas column for AmericanMafia.com. He says he has known of Irwin Molasky since he arrived in Vegas as a child, and has watched Molasky progress from building country clubs and homes to specializing in large government projects.

"I guess he does pretty good work," Miller says. "He seems to have a real good reputation with the government. If I was working with the FBI, I wouldn't want to kiss them off.

"I have no adverse negative dossier on him and I would hear any negatives. He's kept his nose clean, " Miller said.

"Around here he has been Mr. Clean all of his career."

Not everything has gone well for The Molasky Group, however. The developer's son, Steven Molasky, a co-owner of the development group, declared bankruptcy in 2008 with $55.4 million of unsecured debts. Steven Molasky was present at the Portland FBI building's opening ceremony.

Then there is Molasky's son-in-law Kenneth Collin Cornell, husband to Beth Molasky, another co-owner of the Molasky Development Group.

According to Potter's San Diego Reader article, Cornell, "pled guilty to fraud charges resulting from a telemarketing boiler-room swindle in 1994, is being sued for breach of contract in a case arising from a Mission Beach condominium project he developed with his wife..."

As the San Diego Union-Tribune reported in its October 1995 story, "Boiler room's lawyer gets prison for scam," the fraud case concerned Can-Do Worldwide Marketing, which swindled 30,000, mostly elderly, people out of $45 million over three years. Callers would tell people they had won up to $25,000 in prizes, but would have to buy products to claim their winnings. Once they sent money, they received an entry form to a sweepstakes.

Cornell pleaded guilty and was sentenced to a jail term, the Union-Tribune reported. "According to Steven A. Peak, the assistant U.S. attorney who directed the investigation, Andreoli, the chief executive, took $4 million out of the company in three years, and Cornell took $1 million."

The Molasky Group does have another Portland connection. The contract to build the FBI's San Diego facility came under scrutiny after a neighbor launched a lawsuit against the Molasky Group, for allegedly blocking a right of way. As it turns out, that neighbor was Portland-based firm, SN Investment Properties LLC, whose officers include Harsch Investment Properties, led by Jordan Schnitzer. According to the San Diego Reader article, that dispute was settled out of court for an undisclosed seven-figure amount.

From Country Clubs to Corrections Projects 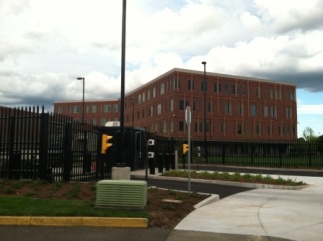 In 2000, the Molasky Group decided to focus on developing government buildings. In Las Vegas, the group developed the IRS building, the Social Security Administration building, and the Molasky Corporate Center, which leases space to the Water Bureau and the Secret Service. By 2009, when the Immigration and Customs Enforcement agency decided to build a headquarters in Las Vegas, the City Council recommended Molasky without bothering to solicit other bids.

The Portland FBI building is the third to be completed. The San Diego building is still under construction. All the buildings will be owned by The Molasky Group and leased to the FBI through the GSA. Under the Portland lease agreement, the General Services Administration will pay the Molasky Group $4,894,120.32 a year for 20 years. Supporters of federal leasing say the arrangement keeps the building on local tax rolls. Critics say it's more costly than buying outright.

A Washington DC-based spokesperson for the GSA, (who asked not to be quoted or named), says the GSA currently leases more than 8,000 buildings. However, because development companies often create a new Limited Liability Company to own and manage each project, she said, it can be difficult to identify the parent companies. So how many buildings does the company lease to the GSA?

Rich Worthington, President and Chief Operating Officer of The Molasky Group of Companies, said the firm's work for the GSA consists of the Las Vegas buildings, the four FBI buildings (Cincinnati, Minneapolis, Portland and San Diego),  and the National Personnel Records Center in St. Louis, Mo.

"We have other government agencies, but I think that's about it for the GSA," Worthington said. Other government projects include prisons and re-entry facilities in Nevada. The firm is now pursuing prison building contracts. Currently, Worthington said, he is in talks with "four or five" states who want to build various corrections projects. But he can't expand on that because these deals haven't yet been inked.

The Skanner News asked Worthington why the Molasky Group is so good at landing government contracts.

"Technically we're delivering the best value to the taxpayer and the government," Worthington said. What governments look for is experience, financial capability and ability to perform, and The Molasky Group's track record speaks for itself.

"I think we meet all these requirements and then some," Worthington said. "We take great pride in the ownership of our properties and we deliver a lot of value for the dollar.

"We're graded annually on that (building management), and that's also a criteria in the selection process."