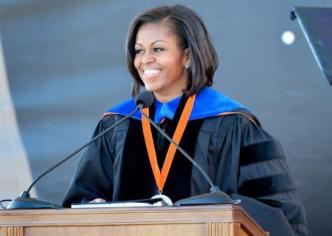 Michelle Obama wowed an enthusiastic crowd of 5000 graduates and their families at Oregon State University where she gave the 2012 Commencement address, Sunday June 17. Speaking under clear blue skies, the First Lady spoke about her father and how much he had taught her about life. She made sure to tell him she loved him at every opportunity, before his death from multiple sclerosis.

"...no matter what struggles or setbacks you face in your life, focus on what you have, not what you're missing," she said.
"My dad taught us this lesson every day by how he lived his life."

Obama urged graduates to pursue their dreams, telling them that fat paychecks, fancy offices and impressive resumes are not the most important things in life.
She was a highly paid lawyer, but felt unfulfilled and left to go work in the Chicago Mayor's office, where she felt she could make a more valuable contribution.

"I was living the dream, but it wasn't my dream," Obama said. "Craig felt the same way, unbeknownst to me."

The First Lady's brother Craig Robinson left a lucrative financial services career to coach basketball. He currently is head basketball coach at OSU. Robinson told reporters he was happy that his sister is meeting his new baby for the first time. Robinson and his wife have a four-month-old son, Aaron.

Martin Kelly, at the ceremony to watch his son Tyler Zinsli graduate, said having Michelle Obama deliver the commencement speech made the occasion even more momentous.
"She's a very interesting and articulate woman," he said before she spoke. "I'm very excited to hear what she has to say."

Obama covered a lot of ground. She talked about her upbringing in South Chicago, about letting people know how you feel and about living according to your values. Don't hold grudges, she said.

"If you're in a fight with someone, make up. If you're holding a grudge, let it go. If you hurt someone, apologize. If you love someone, let them know. And don't just tell people that you love them, show them. And that means showing up."

She praised the university for its cutting edge research and its sustainable campus.
"I'm not here today just because Craig has turned the Obamas into a family of Beaver Believers," she said.

"I'm also here because I'm proud of everything this university is doing for this country. You've built one of the most sustainable campuses in America.You're conducting groundbreaking research on everything from agriculture, to nanotechnology, to childhood obesity.

"You're serving others in so many ways -- tutoring children, joining our armed forces, fighting hunger and disease here in America and around the world. So I can see why Craig feels so at home here at OSU. Because in so many ways, the values you all embody are the values that he and I were raised with." 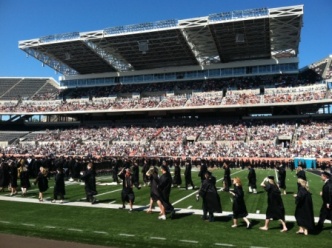 Oregon State President Ed Ray awarded Obama an honorary doctorate in Public Health. In her role as First Lady, she has championed children's health and fitness. As part of that campaign she has focused on healthy living, planting the first White House kitchen garden since WWII.

"Michelle Obama was the best part of it all," said Jordan Carey, a master's degree graduate. "Her speech made the whole thing mean a lot."