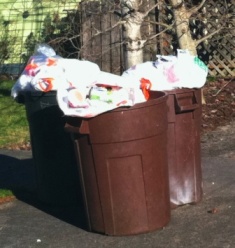 When Portland's composting pilot was introduced six months ago, planners pledged to work with householders to help them solve their garbage problems. Nobody mentioned the possibility of punishment for putting your waste in the wrong bin. But now planning bureau staffers are asking the city council to change the city code – opening the door to fining householders who toss garbage into recycling containers.
Portland City Council will take another look at the proposed code changes at its regular meeting June 21. In the meantime, the issue has raised hackles with some Portlanders, including right-wing radio shock jock Victoria Taft. Taft is scheduled to address city council June 13, on the topic of  "garbage criminalization."

Two other proposed code changes came before council from the Bureau of Planning and Sustainability. One of the three code changes resolves a longstanding issue between neighbors in Nothwest Portland over trash containers on sidewalks. Another code change would keep confidential the identity of anyone who made a complaint to the bureau about another person's waste disposal habits.

Not so fast, was the reaction from Commissioner Randy Leonard, who said he was not willing to vote for a code change that could then be used to fine homeowners.
"I have concerns about having within our collections system a system of punitive fines, as opposed to other strategies we could use to encourage people not to inappropriately mix recyclables with garbage," Leonard said. "Back up, before amending city code. Because once amended the Bureau could adopt fines with or without council oversight."

At the meeting Anderson said both Seattle and San Francisco have made similar changes to city code, but conceded that only San Francisco includes fines for violators. Fines would be a last resort, she said.
"We try to do everything we can to work with the customer to not get there. My intent would be to never use it but to have it be there."

Leonard said he would vote for the ordinance if it made clear that fines would not be levied. And Commissioner Dan Salzman said underlying the issue was the change from weekly to bi-weekly garbage collection.
Only a small number of householders are putting waste in the wrong bins, Anderson said. "…100 lbs a week out of many, many tens of thousands of pounds. It's a very small percentage."

Michael Armstrong, policy and operations manager for the Bureau of Planning and Sustainability, explained that the confidentiality proposal came about so people could feel safe reporting a sidewalk obstruction.
"We typically protect the name of the person to keep them safe," he said.

Armstrong said that the Office of Neighborhood Involvement and the Office of Development Services have similar confidentiality rules for similar reasons.

However, he affirmed that once written into the code it would apply across the board, "to all parts of the solid waste code."
Won't that encourage people with grievances to use the city to get another person into trouble?
"We never take action on the basis of someone telling us something," Armstrong says. "We always look into it ourselves, depending on what the issue is."