By Helen Silvis of The Skanner News
Published: 04 June 2012 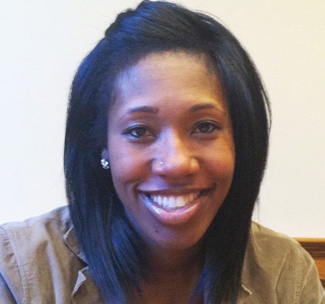 Kali Thorne Ladd is Mayor Sam Adams' Education Strategy Director. She recently had a baby, but plans to be back at work through Adams final months as mayor. Originally from New England, she is a graduate of Boston College and earned her master's degree in education policy from Harvard.

Kali Thorne Ladd came to work for Mayor Adams after working as a policy analyst for Susan Castillo at the Oregon Department of Education. She's also been a SUN Site Manager at King Elementary School, and a consultant for the Portland Schools Foundation (now called All Hands Raised) and for the County Commission on Children and Families. Thorne Ladd also spent two years in South Africa developing educational curriculum, and managing community based projects.

What do you do for education in Portland?

I work as the mayor's education strategies director, leading a team of three plus three Vista volunteers. So we are six people and we are working on strategies to increase graduation rates and access to post-secondary education, trades, career schools and more.

The state and the school district are responsible for education. Why is the City getting involved?

The city needs to be involved because education outcomes affect our prosperity and livability. It's in the city's interest to have a strong education system, where all the young people have an equal education. If we want to be this great city, to be an international city, we have to address inequity because the quality of education matters for people who move and stay here.

What are you doing to change that?

We know that student outcomes are the result of a wide range of factors throughout their lives. So we are trying to build the infrastructure to support youth, recognizing that our systems are broken and we're living in a time of diminishing resources.

The mayor's office is working with schools, with the county and with All Hands Raised (formerly the Portland Schools Foundation) to create a community collaboration focused on what the data tells us and on evidence based practices to improve. The data shows us where students are not doing well, and we've made a commitment to improve in those areas. So the mayor's Cradle to Career initiative is targeting investments to programs like 9th Grade counts and Summer Youth Connects.

We are keeping the focus on equity. Things can be going in the right direction, but we still must ask, "Do all youth show academic gains and achievement that we would hope for?"

Certainly, our state has disinvested in education for the last decade, and it's very hard now because the economy has been so bad. But nationally I think we consistently rank pretty low in our investment in education. Locally, we have done something to cover the shortfall with the Children's Levy and other local option measures that passed in Portland. Measure 5 has definitely influenced education.

Multnomah County has done a great job in trying to keep funding for SUN schools. And I applaud Portland and PPS district for the support they've given to education. David Douglas and Parkrose have struggled to pass school levys. People do care about education, but when the hole is X big it's hard to fill it.

The feds have cut funds too. Nationally we need to fund education better. But money doesn't solve all the problems. When we've had more money for schools, we haven't seen any better results for students of color.

What are the biggest challenges you face in closing the achievement gap?

That's a big question. We have a disproportionate number of youth of color who are living in poverty. In Portland, the opportunities for people of color are limited. The coalition of Communities of Color report shows people of color earn cents on the dollar. We know the economy can have an impact on student outcomes.

Another factor is the overrepresentation of children of color for suspensions. That applies to Hispanics and African Americans. African American boys are more likely to be excluded by a factor of 6 to 1. And we know that when students are excluded there is a detrimental effect on their learning and their morale.

It starts young – and as soon as boys start to outgrow their teachers there is a supposed intimidation factor. Policy solutions include more training for teachers, because often teachers don't realize what they are doing.

English Language Learners are also experiencing problems, and that's another area where, for over a decade, PPS has been out of compliance for various reasons. And those are largely kids of color.

That said the system has been moving toward equity. For years, middle and high schools in affluent areas have had far more access to resources. But under Carole Smith's leadership, PPS is moving to increase equity.

What are our schools doing right?

Roosevelt is a wonderful story and an example of what good leadership can do. Roosevelt is an example of strong teaching and strong leadership. Teachers are very important and Roosevelt has cultivated an atmosphere of high expectations and that shows in the gains students have made. The graduation rate has gone up by 14 percent.

The other thing they are doing is make community partnerships with culturally specific providers. It's simply not possible for schools to serve all the full needs of students – and they are not necessarily good at it.


What are your thoughts about Jefferson?

Jefferson has gone through change after change. And when a school is in constant reform it has a negative impact on students' ability to learn. Now I think it has some stability. And I hope it will benefit from the high school redesign, which was aimed at making sure advanced course work is available to students at schools like Jefferson, which is predominantly African American, as well as in schools that are predominantly white.

I'm in the camp of believing you need the community to be providers in schools to provide services. Jefferson is on its way with partnerships with SEI, PCC and four-year partnerships with universities. I think we are going to see gains.

Have your views changed since you became a parent?

As a parent I'm hyper-concerned about the achievement of African American kids in the system. And I'm horrified by the stories of parents who have pulled their children out of the public schools. Parents of students of color say that it's a lot of work to get teachers to see their children as capable of success.

At one teacher-parent conference, for example, the parent said that she saw room for improvement because her daughter was not excellent across the board. And she asked, what should she do? But the teacher really had no suggestions, and gave the impression that it didn't matter. That sort of mediocrity of expectations for our kids is really disconcerting. I see very few schools where African American students have high academic achievement.

So as a parent I'm really open to being creative with the education system. I'm very supportive of charters. LEP and OPAL, for example, are doing good work. The challenge of charters in Portland right now is that they don't serve children of color.

What about the argument that charters drain support and funds from our public schools?

Charters are divisive. I used to be against them when I was in my master's program. It's easy to be against charters when you don't have children.

Now I get it –as a parent. So I'd rather keep my kid in a public system, but I'm open to charters. And I respect any parent who chooses to send their kid to a charter school. You don't want your kid to be the guinea pig or a casualty of a principle. That, I think, is the most fundamental thing that's changed in me since I was a student.

I see the role of charters as incubators of creativity and innovation that show how we can improve the system. What's not surprising to me is the support of the federal system with the president a person of color. For parents of color, options become really important. I wish there could be a policy that charters have to maintain a certain number of children of color.

We saw a lot of money poured into turning big schools into small schools. Now that push seems to have died. What do you think?

I think a big school can work if you create individual support within that school. In the small schools model, typically you create small schools within a large school, and you have a 9th Grade Academy. Some students do need small schools like Open Meadow, POIC and Helensview. They are great examples of where smaller schools are doing great work.

I'm partial to the success of all students, but I'm particularly interested in students of color being successful. We have a broken system. We know that because of the fact that we have an achievement gap that has been prolific for several decades. The high school graduation rate is 85 percent overall but for African American students it's something like 35 percent. To me that's indicative of something not being right.

So I plan to continue to the end of Sam's term, I want to see our efforts come to fruition and to a place where this can be sustained. It's important for me that the work to be concluded on a good note. When the government makes investments then it's important to see it through. I'm really dedicated to this work.