By Helen Silvis of The Skanner News
Published: 30 May 2012

City Council approved Portland's new Education Urban Renewal Area, May 16, in a three to one vote. It was a major victory for Mayor Sam Adams, PSU President Wim Wiewel and the Portland Development Commission.

Usually the victory ends the battle. This time, the controversy has intensified.

From the publication of the draft plan to the final city council vote, the Education URA was fast-tracked in just over a month. Opponents say the decision was taken too quickly.

"It's a complicated concept and to have just one month to explain this to the public was too short a time," says Debbie Aiona, a board director for the League of Women Voters, which opposes the new URA.

Moving too fast? A downtown Urban Renewal Area has been in the works since fall 2010, says PDC spokesman, Shawn Uhlman. And Mayor Adams spoke about plans for an Education URA in his 2011 and 2012 State of the City speeches. Moreover, planners have been working with Multnomah County and Portland Public Schools to cut a deal that everyone can be happy about.

"From an outreach standpoint and a partnership standpoint, I think what we have done here is work very proactively with all the partners," says Uhlman. "The outreach we have done is very similar to the other URAs." 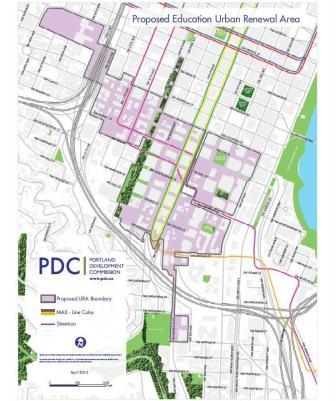 So what's different about the Education URA?

For starters, the original City Center URA proposal was put on hold for more than a year. In December 2010, Adams decided to jettison the original plan. Behind closed doors, in 2011, plans took shape for a streamlined URA, tightly focused on Portland State University and its spinoff research industry.

By April 6, 2012, when the PDC posted the draft plan to its website and sent emails to 1000 'stakeholders,' all the puzzle pieces were ready to fall into place. And during the next month, they did.

"This has now been approved by five different bodies: The Planning and Sustainability Commission, Urban Renewal Advisory Commission, County Commissioners, Portland Development Commission and Portland City Council," Wiewel said. "So five elected or appointed bodies have decided that, 'Yes this is the right investment…'"

There was only one problem. Until January, no details about the plan had been published. And until April 5 no full draft was available. So many city residents were just waking up to the idea that an Education Urban Renewal Area was more than a fantasy item on the mayor's wish list.

What's at Stake?
The Education URA is set to invest $169 million in diverted taxes over 28 years. It will develop 144 acres of downtown property that includes Portland State University and Lincoln High School. The county will get a new $19 million building and Portland Public schools will get $11 million to help renovate Lincoln High School. At the same time, according to The Oregonian local governments and schools will lose those URA taxes: the city will lose $70 million, Multnomah County will give up $68 million and the state schools fund would lose $75 million.

Mayor Adams says the sacrifice is worth it because the entire region will benefit in the long term.

"The URA funds will stimulate private investment and philanthropy in PSU and the region: this will add additional capacity to the tax base in the area. It is estimated that this investment in the Education URA will nearly triple the size of the existing tax base in the region from $608 million to $1.7 billion in 32 years."

Even Commissioner Fritz, the lone voice on council who opposed the URA, likes the idea.

"I do think it's right for Portland; it's just not right for Portland at this time when the city is struggling to cover its budget," Fritz says. "And I question why we are deciding to spend money on new buildings when we can't pay the costs of keeping teachers and students in the classrooms we have."

The League of Women Voters has voiced another objection. The area is far from blighted, so urban renewal is the wrong tool for the job.

"Why doesn't the city just commit to helping PSU by allocating money from the budget to the university over the next 30 years," says Aiona. "We are not arguing against the importance of investing in PSU, we're saying given the impact on other taxing jurisdictions – the schools, the county and the city –Urban Renewal is not the way to do it."

Under the Radar
During 2011, there was no sign that the Education URA was a done deal.

"The idea will likely face significant opposition because urban renewal dollars are earmarked for blighted areas, not neighborhoods such as the ones around Portland State," The Portland Business Journal said in March 2011. "The district includes significant corporate offices, including the headquarters of The Regence Group, the state's biggest health insurer."

Then in July, Portland City Auditor LaVonne Griffin-Valade issued a report saying that urban renewal-related debt had increased by 88 percent since 2001, growing from $280 million to $526 million.

Since then the PDC has dramatically reduced its debt, but at the time, Multnomah County Chair Jeff Cogen told The Portland Tribune: "Those are staggering numbers. I had no idea the city's urban renewal debt was growing so fast. It has consequences for other governments that the city needs to take into consideration."

In November 2011, Portland State released its strategic plan. The plan delivered a harsh assessment of the impact of shrinking state funding, and offered a solution: the potential of urban renewal to create an expanded University District.

"The physical plant is inadequate," the plan says. "With 85 percent of the university's buildings more than 25 years old, many of the facilities are in dire need of renovation and modernization. In all, the campus has a total $272 million of backlogged deferred maintenance and only $3.2 million in state funds to spend for this purpose over the upcoming biennium…
"Access to adequate funding is the single biggest limiting factor for PSU in addressing these challenges. With state funding covering only approximately 13 percent of the total budget, the university has been forced to raise tuition and look to creative partnership arrangements and philanthropy to help fund its operations."

The Last Mile
In January 2012, the PDC began to share a brochure about the Education URA with downtown groups. They met with an enthusiastic reception from the Portland Business Alliance, the private development group Greater Portland Inc., and from Lincoln High School boosters, who already had ambitious plans for the school. They met with residents of Eliot Towers condominiums, with the Downtown Neighborhood Association, the South of Market EcoDistrict Steering Committee and the Goose Hollow Foothills League.

Yet as late as February 2012, Multnomah County Chair Jeff Cogen was telling the Portland Business Journal's Matthew Kish that he had not seen a plan and had plenty of doubts about the project.

"We haven't seen the mayor's final PSU proposal," Cogen told Kish. "But it's important to remember that any time an urban renewal area gets created, there's an impact on already financially strapped taxpayers. And there's an impact on the services we provide to people in need — senior citizens, people facing financial hardships involving their homes, youth programs and other critical services that aid vulnerable populations."

Testimony at the PDC's April 11 public hearing echoed these concerns.

"Over and over again, we've see the city rush to implement programs big and small only to see them fail in the face of haste," said Jim Fruits, an economist and parent of a Laurelhurst Elementary student. "There's no need to rush through this urban renewal area. Portland State's not going anywhere. It will continue to grow and prosper even if this urban renewal area is given more time to undergo the Portland process that we value and take so much pride in….

"As a Commission you owe it to a new city council, a thoughtful and cautious deliberation of this proposed urban renewal area even if means slowing down the runaway train."

Wendy Rahm, an Eliot Tower board member, said the PDC needed to provide more information in its outreach efforts.

"I appreciated PDC coming to give the briefing at the Eliot," she said. "It's a big tower -229 units, 400 people. However I was troubled by the fact that this briefing was used as a checkoff for PDC outreach. Many of the 56 people who attended were dismayed by the lack of detail presented, and by their questions for more specific detail going essentially unanswered. To be fair, I think our presentation was early, and therefore may be perhaps premature, but there were a lot of concerns expressed about that after the meeting."

Rahm was one of several people who asked PDC Commissioners to slow down the decision. They didn't. A public open house at PSU on April 17, concluded the outreach process. On April 24, the Planning and Sustainability Committee approved the plan. Multnomah County Commissioners approved their share of the deal on April 26. The Central City URA Evaluation Committee, which had not met since late 2010, was reconvened April 26 to learn about the new plan. They approved it that same day.

Four days later, PDC Commissioners sent the plan to city council for final approval. The council took public testimony on May 9, and voted the URA into existence on May 16.

To insiders, it was the successful conclusion of years of work. To outsiders it was a rush job. As Maurice Sendak might say. "Let the wild rumpus begin."