Helen Silvis of The Skanner News
Published: 15 May 2012 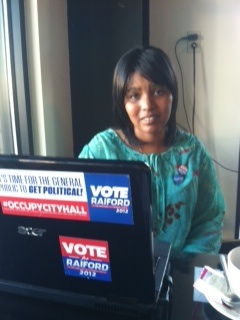 6:15 pm: Meet up with Teressa Raiford, candidate for City Commissioner position 1 at Elevated Coffee on N.E. Martin Luther King Jr. Boulevard. Plan is to make as many election parties as possible.

Whatever happens tonight, says Candidate Raiford, it's important to pay attention to what the winning candidates do once they are in office. Raiford remembers that The Skanner News came to her announcement party and says she's glad we're with her tonight.

6:57 First stop, the Brady party on the Spirit of Portland at Salmon Street Fountain. Just outside is Ms. Sheltoria McDonald with her nephew JaSean.

On board the party hasn't filled up yet. It's early. Resisting the very attractive salad bar and buffet.

"It's all about small businesses, she says. "We have to stop asking for government jobs and create our own jobs."

7:27 Ready to move on, but can't miss this opportunity to take pics of Woody Broadnax and friends and then here's JoAnn Hardesty who poses for pics with Ms. Raiford. (See all the pics on The Skanner's Facebook page)  Also bump into Alexa from the Portland Mercury.
7:40 Leaving the Brady party, the candidate still isn't here and results not announced. View of river fantastic, however.
Heading for the Jefferson Smith party at 7th and East Burnside. Raiford says she likes Smith because, "He isn't a 'yes' man. He doesn't agree with everything."
As we arrive there is some cheering going on. The elections division has announced the first count. Smith and Hales neck and neck in the Portland mayor's race with 28 percent each. Brady trails with 24 percent. 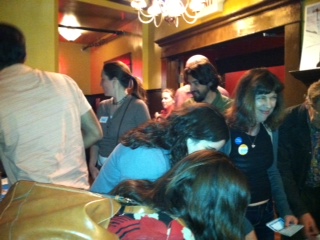 8:15 p.m. Surprise! Judge Ellen Rosenblum has big lead in the Attorney General's race: 63 percent to Dwight Holton's 36 percent. The race is called for Rosenblum. Oregon's first woman AG? Will the Republicans field an opponent in November?
8:21 Hales and Smith both at 29 percent, but within the next few minutes Hales will  gallop off with the lead.  Rev. Renee Ward says she hopes the race goes to a runoff because, "I don't think people know the real Jefferson Smith."
Spot Amy Ruiz, former Portland Mercury reporter, now staffer for Mayor Adams. She has her son Alex with her, and he is the MOST adorable baby you ever saw.

8:30 Cameron Whitten arrives at Smith HQ. He is disappointed that Amanda Fritz and Mary Nolan look set to go to a runoff. A Fritz supporter, he hoped she would win tonight. Meanwhile, Steve Novick has been named winner of his city council race with some 75 percent of the vote.
8:40 On our way to the Hales HQ. Raiford bumps into Spencer Burton. "He came to every candidate forum," she says, "every last one of them. And he voted for me."
8:45 Head over to Hales HQ to drop Raiford off. The Skanner News is taking a short break to pick up a certain student from the Benson High School Evening Scholars Chemistry class.
9: 05 Student: Why did the hipster burn his mouth drinking coffee?
Mom: Umm, why?
Student: Because he drank it before it was cool.
9:30 Back at Hales party, where I hear I have just missed Faye Burch and James Posey. Feeling ravenous. If campaigns were judged on food, Eileen Brady would have been hands down winner. Hales table has some pretzel chip thingies. Didn't even see food at Jefferson Smith's, but could have missed  it in the crowd. Eat pretzels anyway.
Everyone wants to shake Hales' hand.  Spot Portland City Commisioner Nick Fish and Sarah Carlin Ames, spokeswoman for the Governor's Education Investment Board.

William Harden says he's been a Hales supporter for more than 20 years. Why?
"Charlie is an honest person. He's a fair person. He'll get the job done for the citizens of Portland."

10:00 Ready to move on. Just as we're leaving, Calvin Henry arrives and then Alan Wone, who has been filming Raiford's campaign. Wone says he's been working an event with music and dance. And he invites us to 'Diatribe' on Friday May 25 at the Alberta Rose Theater.
"You're going to see something you've never seen before," Wone says.
The Skanner News plans to head to the Fritz party.  Raiford decides to part ways. She heads off with Wone. Thanks Teressa Raiford for letting us keep up with you. You know that's not easy.
10:05 Oops. The Fritz party ended at 9:30. Great opportunity to head downtown to the Ace Hotel where Judge Rosenblum is holding her party at the aptly named The Cleaners. Er! Isn't that where Rosenblum's just taken Holton to?

10:20 Have to knock on door. Since race was called early most celebrants have gone home.  Judge Rosenblum says she is tired but still here. Her opponent may have underestimated her, she says.

10:45  Toy with idea of going to Nolan campaign at the North Star, but it's not on the way home and things seem to be wrapping up. Head back across river to East Burnside. Party in Jupiter Hotel might still be going.

11:00 No sign of politicos at the Jupiter. But band is on soon. Tempted to stay for drink, especially since we're told Jupiter doorman Josh has many, many stories to tell.