Helen Silvis of The Skanner News
Published: 08 May 2012 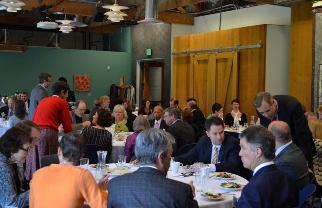 An advocate against hunger, a philanthropist businessman, a technology pioneer and a publisher were honored May 1, at the second annual "Bending Toward Justice" luncheon. Sen. Jeff Merkley hosted the event and presented the awards.

Held this year at Portland's Ecotrust building, the awards luncheon is sponsored by Opportunity & Renewal and Progress for Oregon political action committees, which support Sen. Merkley. About 300 people attended the luncheon.

Rachel Bristol, executive director of Oregon Food Bank, will step down this year after almost 30 years feeding hungry people in Oregon. Her advocacy has helped hundreds of thousands of people, and under her watch Oregon Food Bank has expanded. The food bank distributed more than 81 million pounds of food in 2011 and the Portland Business Journal named it the "most admired" nonprofit. 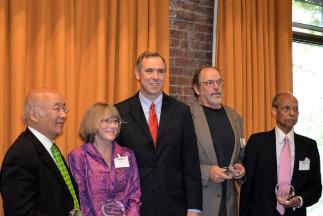 Ward Cunningham is the inventor of the wiki method of sharing information on web pages. A technology expert, Cunningham has been a lead innovator at tech companies such as Microsoft, Tektronix, the Eclipse Foundation, Wyatt Software, the Hillside Group, AboutUs and currently Citizen Global. His inventions have influenced web development across the globe.

Sho Dozono is the founder and owner of Azumano Travel. In 1996 he organized a 30,000-strong march to support school funding, before forming the Portland Schools Foundation, now called All Hands Raised. After 9/11 he organized Flight of Freedom to support New York's tourist industry and has sent similar Flights of Friendship to Thailand, after the 2004 tsunami, to New Orleans after Hurricane Katrina, and to Japan after the 2011 earthquake.

Bernie Foster is the publisher of The Skanner News, which he started more than 35 years ago to give a voice to African Americans and other underserved communities in Portland and the Northwest. When activists wanted to name a street in Portland after Dr. Martin Luther King Jr., they convened at The Skanner News building. Foster also co-founded with Bobbie Foster, The Skanner Foundation, which distributes education scholarships at its signature event, The Martin Luther King Jr. Breakfast.