Bruce Poinsette of The Skanner News
Published: 07 May 2012 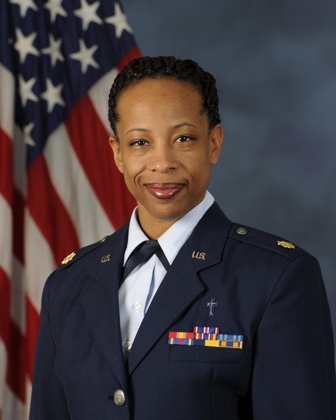 Trisa Kelly is surprised she is making history.

Last month, Kelly was named by Gov. John Kitzhaber to Oregon Department of Veterans' Affairs' Advisory Committee  -- the first Black woman to be appointed, and the youngest to serve.

She was already the first African American chaplain – and the first female chaplain – in state history for the Oregon Air National Guard, where she serves with the 142nd Fighter Wing. Her rank, after 10 years of service, is Major.

Kelly says she hopes to use her experience to bring a different perspective to the state ODVA advisory committee and more awareness to underserved veterans.

She often gets questioned on how she can work with so many non-believers when she is a dedicated Christian.

"There are Buddhists and Atheists at the base but we're all human," says Kelly. "My spiritual background helps me be empathetic. Personally I believe all wisdom is God's wisdom. I show the compassion that Jesus would. Jesus was around a lot of non-believers."

A mother of two who works full-time as a bilingual Medicaid eligibility worker for Multnomah County Health Department, Kelly was born in Patterson, N.J. and moved to Portland during middle school.

After graduating from Jefferson High School in 1989, Kelly graduated from Portland State with a bachelor's degree in Spanish and French.

She is in charge of spiritual care and handles counseling for veterans, and also performs ceremonies such as marriages, funerals and christenings.

Kelly says she's lucky not to have been deployed to any dangerous theaters, but she is with her soldiers in spirit.

Ordained in 1997, Kelly also serves as Associate Pastor of Maranatha Church in Northeast Portland. She says she was born and raised in the church and that she found her faith at a young age.

"I sensed a call to do work for him (God)," says Kelly. "When I was younger I thought I would be on a mission field. God doesn't give you the whole picture at once."

Before she was ordained, Kelly taught Sunday school, led Bible studies and worked with young adults in the church.

She began seminary at Western Evangelical Seminary and completed her studies at Western Seminary.

According to Kelly, faith was part of what led her to the military. She says she had friends and family in the service who insisted she would be a good chaplain; so she signed up for the Guard and was given the opportunity.

For the most part, this didn't cause much commotion, she says.

"I've never had anyone get up and leave," says Kelly. "In the military you learn to adjust to adversity. I had a funny moment at one event where someone asked me, 'Are you the chaplain's assistant?'"

Kelly will be using her experience as an underrepresented voice to advocate for other veterans she feels are underserved. Specifically, she says she wants to advocate for traditional Guardmen because, according to Kelly, most of the people serving on the Oregon Veterans' Affairs Advisory Committee are chosen from former active duty soldiers, sailors, airmen and Marines.

This has resulted in, she says, more extensive GI loans for active duty soldiers. The issue, she says, is that Guardmen are not eligible for some benefits because they are considered by some to be "weekend warriors" rather than full members of the military.

"I'm tasked to do extra things like funerals and weddings," she says. "This is time I have to take away from work. What if I have used my two weeks but I need to help a family that has to bury a loved one?"

Kelly recalls one moment, during a memorial in Bulgaria, where she saw the bright eyes of a woman in the Bulgarian military and was touched by the sight of a fellow female soldier.

"I deploy through my members," says Kelly. "As they travel across the globe, I'm privileged to be able to serve, pray for them and reach out to families.

"When they return I can help them transition back to civilian life."