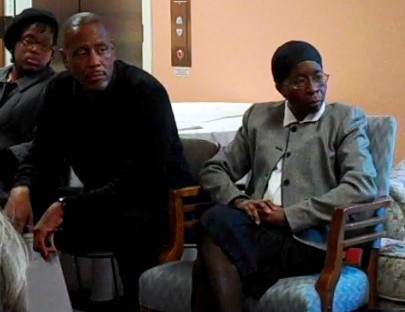 Instead of enjoying a sunny Sunday afternoon, members of Occupy North East (ONE) – a.k.a. 'The Black Working Group,' We Are Oregon and Ainsworth United Church of Christ (UCC) came together to discuss foreclosure and how churches can get involved.

"Our position is that the struggle has to emanate from the ground up," says Ahjamu Umi, of ONE. "It can't happen any other way and everyone needs to be involved."

One woman told the group her foreclosure was more painful than a divorce she was going through around the same time. Another couldn't help but curse when she relived her experience.

While big banks were the main target of the testimonies, ONE's Alicia Jackson expressed a broader sense of distrust. She says her home was marked for foreclosure in 2008 and she self evicted out of fear. When she went to one local foreclosure help nonprofit, she says she was charged $25 for a credit check; she says she later found out she could get the service for free. In addition, she said she was receiving letters from various groups, but didn't know who to trust.

Ultimately, Jackson says she found reliable help in ONE and We Are Oregon. Jackson refuses to be embarrassed by the experience.

"Why should we be ashamed," she says. "The banks should be ashamed. They are committing the crimes."

Umi stressed the need to re-frame the conversation. He said people facing foreclosure are conditioned to feel like losers but challenged the group to examine how banks got control of their land in the first place. Particularly, Umi notes that many major banks profited from slavery.

"Banking systems started by selling insurance premiums on my ancestors," he says. "How did they get in the moral position to tell you that you have to pay them to live there, and if you can't do it because something happened in your life that you didn't plan on, that there is somehow something wrong with you?"

Representative Lew Frederick of House District 43 echoed these sentiments and explained the legislative side of the foreclosure discussion.

"You need to know about MERS," he says. "If you don't then you don't understand the package of things that are taking place."

Frederick says MERS is a black box. If you buy a house for $200,000, he says you could end up spending $300,000 over the course of the sale. The sale is listed as $200,000, so the bank sees the extra $100,000 as profit. Portions of this profit are sold off, betting you'll pay the mortgage. Meanwhile, the bank also puts insurance derivatives against you paying your mortgage and sells them to hedge funds. In the end you could have 200 people owning a portion of the sale and the electronic system will list the property at $2 million.

There were gasps, groans and plenty of head shaking after Frederick's anecdote.

Mahaffy noted that there are a number of steps that can be taken before resistance. One of the more unconventional efforts he shared was when his group went to the Sheriff's Department in December and sang fake Christmas Carols ("We wish you won't evict us" instead of "We wish you a merry Christmas"). He says the effort contributed to a short term moratorium on foreclosures during the holiday season.

"It's knocking on your neighbor's door," he says. "Their issue may not be foreclosure. It may be about hunger. Or it may be about jobs. It's all interconnected and we want to involve everyone to make a change in the community."