Jailin Gage: How One Teen Puts School and Sports Together 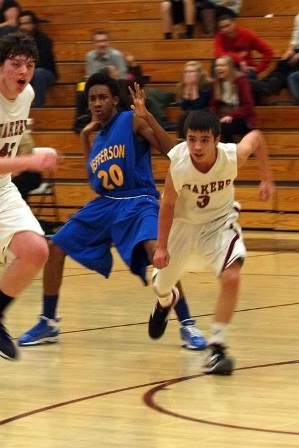 The first thing that stands out about Jefferson High School guard Jailin Gage is his humility.

"I don't want to put everything on me," he says, with his father Johnnie and brother Johnnie Jr. at his side.

Gage, who is also an honor roll student, led the school's freshman basketball team to an undefeated season and averaged 24 points a game. He goes to great lengths to praise his coach, teammates and family influences for his success, both on the court and in the classroom.

"It would've been rough without my teammates," says Gage. "They really helped back me up."

It has also helped Gage attract attention from one of the top basketball schools in the nation, Oak Hill Academy. Current National Basketball Association (NBA) players who have played at Oak Hill, which is a fixture in national high school rankings, include Carmelo Anthony, Kevin Durant, Tywon Lawson and Brandon Jennings.

Johnnie Gage can barely hide his pride, but emphasizes that the family's focus is in Portland for right now.

"We may do that at some point," he says. "He has built up a good rapport with them. We don't want things to get to big for him. He'll have the chance to be out on his own when he gets to college."

Staying grounded is a theme with Gage.

Although his father says he had the option to play up, he decided to play freshman basketball, along with Junior Varsity, to build his skills and gain experience.

The teenager credits his coach Jimmy Thompson with helping him develop as a player, as well as keeping him focused in school.

He says Thompson pushed him when he felt his effort was lacking on the court and constantly made an effort to check up on Gage in school to make sure his grades were in order.

Gage says this was particularly important in helping him balance out the time commitments of sports and academics, since he also plays football and baseball.

Gage says he leaves the house at 7:30 in the morning and doesn't get done until 6:00 at night.

Two and a half hour basketball workouts are included in this daily routine.

His father makes sure he practices the same discipline when it comes to studying.

"Basketball is second to education," he says. "If he can't stay on the honor roll then he can't play ball."

Gage says he spends two hours every night studying no matter what else is going on in his life.

He has been on the honor roll since the sixth grade and currently maintains a 3.5 grade point average.

While math is his favorite subject, he says he is most challenged in biology and history.

Gage is candid in admitting that he can get good grades in most classes without studying particularly hard but says he still enjoys school and his teachers.

"I have good relationships with all my teachers and get along with my peers well," Gage says. "If I want to be whatever I want to be in life then I have to go to school."

While the prestigious Jefferson basketball program played a large part in Gage's decision to go there, he was also attracted by the Middle College program.

Gage says he is excited to leave high school with college credits; beyond basketball, he aspires for a career in sports medicine. Gage's cousin graduated from Benson as a golf player and turned the opportunity to play in college into a medical degree. Gage has another cousin that is an attorney.

Johnnie Gage says his son's cousins are on his case all the time about grades.

"It's another way to touch on his interests," he says. "It's important that they're involved, as well as his parents, so he gets that push from both generations."