By Helen Silvis of The Skanner News
Published: 24 March 2012 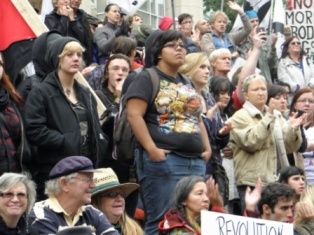 A crowd of people wearing hoodies gathered in Peninsula Park in North Portland early Saturday to express support for the family of Trayvon Martin, the Florida teen who was shot dead Feb. 26 on a trip to the store to buy candy and an iced tea.
Organizers Mary Hill and Teressa Raiford had invited several pastors to speak, including Rev. J.W. Friday, Rev. Leroy Haines and Pastor Julia Neufeld. The mics were open for any community member who wanted to talk to the crowd, and many people spoke out. The chant, "no justice, no peace,"  was heard several times during the rally.
"Hoodies up," said Pastor Friday before making a prayer for the slain teen and the assembled crowd.

Speakers expressed sadness and voiced support Trayvon Martin's family in their call for the arrest of George Zimmerman, the volunteer neighborhood watch captain, who told police he acted in self defense, when he shot the 14-year-old high school student.
"How is it you can shoot a man down, shoot him down with the neighbors hearing him cry out 'Help?' The law let him go home with the gun in his hand," said one speaker.

Speakers connected the shooting to similar events in U.S. history – the murder of 14-year-old Emmett Till during the civil right era – as well as to more recent shootings in Portland. The deaths of Kendra James, Keaton Otis, James Chassie and Aaron Campbell were among those remembered. 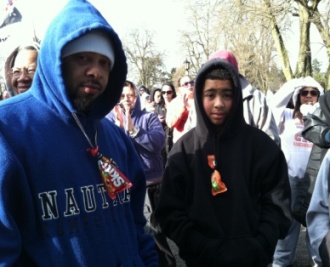 Hill, a mother of five children under 13, said the Martin's death has touched her profoundly. "I am a changed woman for ever. I will never be the same," she said. She urged the crowd to sign a circulating petition, saying, "This Zimmerman, he needs to be locked up."
One speaker who identified herself as a Hispanic woman, said racism was to blame for the shooting and that she felt shame that Zimmerman was Hispanic.
Hill and Pastor Friday were two of many speakers who called for community unity. Pastor Friday said he will play Community Unity concerts this summer in Peninsula Park.  Others called for men to attend a meeting at 6 p.m. Tuesday March 27 at Self Enhancement Inc. 3920 North Kerby Ave., to build support for young men in Portland. 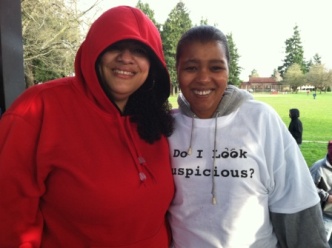 Rep. Lew Frederick and Midge Purcell of Portland's Urban League urged the crowd to make their voices heard in Salem when laws and policies are made that hurt minority communities. They joined Hill in asking the crowd to lobby the Oregon Legislature by visiting Salem in person, and to make their votes count at the ballot box.
Other speakers talked about the problem of youth violence in the Black and Hispanic communities. Speakers urged those in the audience to mentor and support youth, and to work for better education and employment opportunities.  Forty percent of young people in Portland are unemployed, noted Pastor Friday.
"Every man, whether you have a son or not, should be mentoring some young man," he said. 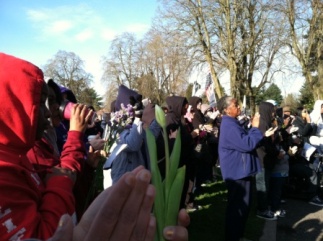 Several speakers also remembered Yashanee Vaughn, who disappeared one year ago, March 19, 2010. Her body was found months later on Rocky Butte.  She was just 14 and a student at Helensview High School. Parrish Bennette, 16 at the time, is accused of murdering her and currently is in custody awaiting trial.
Vaughn's mother, Shaquita Louis and family supporters were present in the park, handing out flyers. They believe that Bennette must have had help to hide his crime and transport her body, which was discovered in a wild area of Rocky Butte.
Portland is one of many communities across the country to hold demonstrations demanding justice for Trayvon Martin.  Police in the small Florida town of Sanford made no arrest. Lawyers for the family contest Zimmerman's claim of self-defense citing 911 tapes and cell phone records as well as Zimmerman's past conduct. The Department of Justice is investigating.