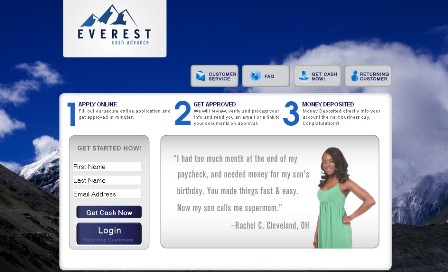 She was desperate to pay a handful of crucial bills, so she went online and researched digital loans.

She read about Internet payday loan companies and how they work – but she found one that seemed better than the others.

"In order to find out if I qualified I had to give them my bank account and social security number like you would for any loan," she told The Skanner News. "There was my first stupid thing."

This Oregon resident -- who has requested anonymity because she hasn't yet told her family that a $400 loan turned into a $1,000 nightmare -- has helped touch off a national effort by Sens. Jeff Merkley (D-OR) and Sen. Daniel Akaka (D-HI) to regulate the billion-dollar offshore payday lending industry.

Merkley and Akaka this month officially requested that Consumer Financial Protection Bureau (CFPB) Director Richard Cordray take action against such payday lenders, who appear to be reaching right into unwary consumers' bank accounts and siphoning out everything they can get.

"Millions of Americans are affected by the abusive and deceptive payday lending practices across our country and over the Internet," Merkley says. "While Oregon is lucky to have state legislation in place to stop the worse practices, there are still loopholes and offshore websites that are dragging Oregon families into black holes of debt.

"We have to bring order to the Wild West of the lending market."

The issue of storefront payday lending caught fire in Oregon's legislature in 2007, when lawmakers sought to put limits on interest rates, rollover of short-term loans, and Internet scams entrapping consumers in debt over trivial loan amounts – some with interest rates as high as 500 percent.

Former Gov. Ted Kulongowski in 2007 signed into law a handful of bills bitterly fought by the payday loan industry which effectively ended their growth in the state – but didn't end their ability to pull money from desperate borrowers.

Merkley was speaker of the Oregon House that year and was instrumental in the effort.

"Payday and other high-cost, small-dollar loans are marketed as ways to cover short-term credit needs," Merkley wrote to Cordray last week. "However, the loans are often structured to trap borrowers in long-term debt.

"These loans have high fees and automatic roll-overs, which, as research by the Consumer Federation of America has shown, combine with other practices to make the effective annual interest rates 400 percent APR or more," Merkley wrote.

Now that payday lenders have taken their business to the worldwide web, basing their operations in offshore locations such as the Virgin Islands, they are effectively escaping any accountability for unethical transactions – because without federal regulation, it's all legal.

The Skanner News called up the Everest Cash Advance company Monday afternoon for a comment on this story; the telephone operator, who identified himself as Antonio, abruptly cut the line.

In a second call made Tuesday, Antonio referred the Skanner to another customer service representative named Christopher, who said he would pass on our inquiries to the "relations department."

Meanwhile the State of California has filed a cease and desist order against the company and at least one consumer protection website lists their corporate headquarters in Charlestown, Nevis, West Indies.

Once the company had the borrower's banking information, they were able to freely deposit – and more importantly, withdraw – money from her bank account without any scrutiny or limitations whatsoever, once she had filled out the online form determining her "eligibility" for a loan.

"The very next day – maybe even the same day – I got a notice from them saying, 'Even though we haven't been able to reach you to verify your information, we have determined that you are qualified for a loan and the money is already in your account,'" the borrower said.

"So I checked my account and sure enough there was $400 that I hadn't counted on. And being that I was just so incredibly desperate to pay off a bill that absolutely had to be paid, I went ahead and used it.

"Then two days later I contacted them and said, 'What's the interest rate on this loan?' And they said, '30 percent.' And I said wow that's a lot of money."

She says by the next day, SCS Processing had taken $130 right out of her bank account.

"Now I assumed – again a lot of this was just real stupidity on my part – that $100 of that was going to the loan and $30 towards interest. Two days later they took out another $130, and I thought, 'Oh my gosh, well at least it's half paid.'

"So I called them and they said, 'Oh no, that $130 is purely the interest – none of that is going towards principal.'"

The borrower said that almost all of the conversations she had with SCS were in online chat rooms set up for that purpose – so when she finally started confronting the agents she had connected with, she had no records of what they said or what the terms of the "loan" were.

"You have a dialogue back and forth online, I'm typing and then she's responding. And her name was, quote, 'Sophie.' And I said, 'That is just not right, that is not going to work, you are not to take any more money out of my account. Period.' And she said, 'I'm going to have to refer this to a supervisor.' And I said, 'Okay who is the supervisor?' And she said his name is Kevin.

"So I actually got Kevin on the telephone line, and of course he tried to belligerently bully me. 'You signed a contract, m'am, you owe us that money. If you don't pay it we'll turn it over to the collection agency. We'll accept two payments of $272.50, two weeks apart, and that is all we're willing to do.'

The borrower took her complaint to the Oregon Department of Justice, which quickly determined that neither SCS Processing Limited nor Everest Cash Advance had a current address in the United States.

Soon the borrower realized that every time she called the company the employee she spoke with last time "was no longer with the company."

"In the meantime they took out another $272.50, completely wiping out my back account, and of course I had some overdraft charges for checks I had written.

"The $400 loan coast me about $1,000; in the meantime I did change my debit card number and put a hold on my checking account," she said – the only thing that severed her connection to the long arm of SCS Processing.

Merkley and Akaka are calling for:

-- Requiring greater disclosure for online websites that mask the true identity of the lender and ending abusive practices that provide data to payday lenders and debt collectors that defraud consumers in paying debts they do not owe;

-- Closing loopholes and other measures to rein in offshore payday lenders that can drain bank accounts without consumers having the ability to stop them;

-- Making sure that all banks and insured depository institutions are supporting healthy banking practices.