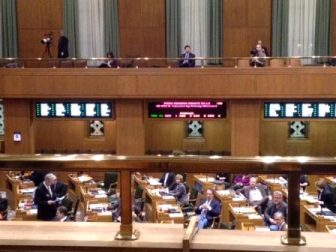 The last-minute success of a foreclosure reform bill, which the Oregon Legislature passed on the last day of this year's session, astonished even seasoned Salem watchers.

"We did the impossible; I'm not kidding," says Angela Martin of the nonprofit advocacy group Economic Fairness Oregon, which lobbied hard for the bill.

"Homeowners will now have the right—whether they are in default or are underwater with their homes, but have not fallen behind – to have a face to face meeting with their lender. The lender has to show up and they have to send someone who has the power to make decisions and can give a full accounting of any fees the bank says they owe."

How effective the reform will be remains unclear, since the law doesn't give the Attorney General power to enforce it.

What the new Oregon law does say is that mortgage lenders must meet with homeowners in the presence of a mediator and make a good faith effort to avoid foreclosure. In addition, banks are forbidden from simultaneously pursuing foreclosure, while telling homeowners they are working with them to modify their loans. The mediation will cost $200 each for lenders and borrowers, but mediators can waive the fee for struggling homeowners.

"It ends the dual process that banks have been involved in," Martin said. "It's surreal. They tell homeowners they are working with them and have them fill in forms for loan modifications. Then maybe they lose the paperwork and the homeowner has to do the forms again. But all the while the bank is fast-tracking them to foreclosure without their knowledge. So the homeowner can think they will get a loan modification in a week and two days later the bank will foreclose on them. With this law the lender is forbidden from doing that."

Before meeting with a lender, homeowners must first meet with a HUD-certified housing counselor. In Portland, HUD-certified counselors are available through the African American Alliance for Homeownership, Portland Housing Center, Hacienda CDC and Clearpoint Financial Solutions. (See list at bottom of page)

But the Attorney General's Office says enforcement was not part of the deal.

"While the AG (Attorney General) is given the responsibility of creating the mediation program required by SB 1552, the legislature did not give the AG any authority to enforce violations of the act," says Tony Green, communications director for the Attorney General's Office.

Asked what that means for enforcement, Green said, "There are questions about enforcement."

"There is recourse; you can sue," he said. "That's how it was intended."

(UPDATE March 14, 2012: After this article was posted online, Jared Mason-Gere, communications director for the House Democrats contacted the Skanner to say a provision in the bill will award attorney fees, a $500 fine and any damages awarded to any homeowner who prevails in court. This will apply to violations of the "dual track" law. Republicans opposed giving the AG powers over either dual track or mediation violations, Mason-Gere wrote in his email.
"For both violations of the mediation and dual track provisions a cloud will be placed on the homes title, limiting the ability of the lender to resale the home. Consumer advocates believe this will give them a cause of action to enjoin any foreclosure.")

The law will apply only to lenders who process 250 or more home foreclosures a year, which means it won't apply to smaller lenders, such as most credit unions. Commercial loans are not covered.

Legislators Battled Over Bill
Passage of the bill was a surprise victory for Democrats. Many Salem watchers thought the bills were dead. So what happened?

"The best answer to that is a lot of constant pressure from the public," says Rep. Lew Frederick. Frederick said editorials in the Oregonian, the Register Guard, the Portland Business Journal, the Mail Tribune and other local papers helped persuade Republicans to compromise. "They got significant pressure from media that they knew they would somehow have to deal with at election time."

Two bills passed the Senate early in the session, but Republicans on the House Consumer Protection Committee, Rep. Gene Whisnant, R—Sunriver, and Rep. Matt Wand, R—Troutdale, pushed for a version that would have made mediation purely voluntary and at the same time would have retroactively legalized processing foreclosures through the controversial Mortgage Electronic Registration Systems Inc. MERS is an electronic recording method that allowed banks to avoid registering property changes through county property recording offices. Oregon courts have made contradictory rulings about the legality of MERS.

Democrats didn't want to pass a law that gave banks a pass on MERS. And they said the requirement for banks to attend mediation was the heart of the bill.

Republicans added a requirement for homeowners to meet with a HUD counselor. Democrats agreed that counseling helps homeowners understand their rights. Counseling stayed in the final bill.

Whisnant said House Republicans offered amendments that prioritized counseling and would have made mediation voluntary because mediation isn't necessary for everyone. He said they also wanted to use funds from a national settlement with the five biggest banks to pay for mediation. He says he didn't want homeowners to be charged $200. He also defends MERS, saying it makes it easier for homeowners to identify who owns their loans. And he says he and Wand dropped MERS early on.

"We felt the best way to help people was to use the $250 million from the bank settlement. We can dedicate these dollars to help homeowners. That's a concern I have. We have to really watch that money or it will get used for other purposes.

'The bill as we have it does have mediation and it does get rid of the dual track. It's not everything we wanted, but I'm really happy with what we did achieve."

In 2011,  the American Legislative Exchange Council, a national group that works to pass state laws that, "advance the Jeffersonian principles of free markets, limited government, federalism, and individual liberty," named Whisnant one of eight state "Legislators of the Year."  ALEC says it is nonpartisan, but opponents argue that it represents corporate interests. Occupy Portland organized a national demonstration against ALEC Feb. 29.

Whisnant says he and Wand were just as keen to pass foreclosure reform as Democrats; the difficulty was finding agreement over what to include in such short time.

At the last minute the two Senate bills were consolidated and Republicans signed on. Martin credits the hard work of House Democratic leader, Rep. Tina Kotek, and a small group of Democrats who pushed hard to get agreement.

The Big Picture
Nationally, the Obama administration has created programs to help struggling homeowners remodify their loans. This week the administration announced that the Federal Housing Administration will lower its refinancing fees. The administration will also review military foreclosures and ensure service-members are compensated when lenders foreclosed illegally. HUD also offers several programs, such as HAMP (Homeowners Affordable Modification Program) and other options that can reduce the loan principal, defer payments for unemployed borrowers, or help homeowners exit loans without foreclosure.

"This bill offers a way to put some of the president's proposals into action," Angela Martin said. "It will turn them into reality by forcing banks to come to the table and giving homeowners the opportunity to say, 'I qualify for that program. You have to enroll me in that program."

Across the United States investigators have uncovered multiple cases where banks were found to have abused the foreclosure process and committed fraud through practices such as forging documents and altering dates. Lenders employed "robo-signers," to sign off on hundreds of thousands of legal documents without having any knowledge of the cases.

In many cases, homeowners complained it was impossible to locate the actual owner of their mortgage because the loan had been chopped up and then bundled into multiple packages for sale to investors. When too many of those loans went sour, investor confidence fell and the financial markets collapsed along with the real estate market.

The five largest banks (Wells Fargo, Bank of America, J.P. Morgan Chase, Ally Financial and Citigroup) last week reached a $25 billion settlement with 49 states, including Oregon, that ends a 16 month investigation into foreclosure abuses. Under that settlement, one part of that deal gives Oregon $30 million specifically to help struggling homeowners.

According to the Oregon Attorney General's Office, which is also responsible for enforcing that settlement, homeowners who have been foreclosed on by one of the five banks will receive $1700. The remainder of the money will be used to bring down the principal of loans and to help struggling homeowners.

The Wall Street Journal last week reported that banks made record profits in 2011. "Bank net income in 2011 was $119.5 billion, a hike of $34 billion from full-year 2010 earnings," writes Ronald D. Orol in a Feb. 28 article for the journal's MarketWatch section. The article also notes that banks still are lending far less than in the past.

Martin says the banking industry is responsible for creating the foreclosure crisis because its leaders deliberately pursued reckless lending policies they knew could not be sustained.

"I'm not excusing any individual borrower from responsibility for the loans they took out, however 5.5 million people didn't wake up one day and decide to throw away their futures. They were sold a bill of goods," she says.

"There were people making enormous profits off the pain they were dealing. This whole crisis started with some really toxic loan products. And they were constructed by financial professionals. They were telling people, 'We are the financial experts and if you don't tap into equity, if you don't buy a home, you are putting your children's future at risk.