By Helen Silvis of The Skanner News
Published: 29 February 2012

"What is really heartbreaking about the report is that it exposes that certain Asian and Pacific Islander communities are in serious poverty, facing significant educational barriers and are living in poor health," he said.

"This is a wake-up call, not just for policy makers but for all Communities of Color to work together to ensure racial equity and racial justice in our public and private institutions."

Yet looking at the entire community, local and national figures a pattern emerges, which shows local Asian and Pacific Islander communities fare worse than their national counterparts on a wide range of statistics.

"In each community (NativeAmerican, Latino, African American, African Immigrant and Refugee, and Slavic), disparities are worse here than national averages, and worse here than in King County (Seattle), and in many cases worsening in recent years," the report says. "Given this pattern, we believe that the same dynamic is true within the API community. Furthermore, the lived experience of those in the community illustrates that racial discrimination and racial bias are rampant in the region."

Nationally, for example, 14 percent of Asians don't finish high school. In Multnomah County that's 20 percent. And at the other end of the education spectrum, nationally 19.5 percent of Asians earn graduate or professional degrees compared to 12.5 percent locally.

What's more, looking at progress over time, several troubling disparities are increasing. Poverty rates for Asian children under 5 grew from 11.3 to 15.6 percent between 2000 and 2009. For Whites it decreased slightly from 12.5 percent to 12.4 percent. For elders that disparity over time was even larger.

Lee Po Cha, director of family services for the nonprofit Immigrant and Refugee Community Organization, said in general the communities profiled in the report expected the results, although the extent of some disparities did surprise him. 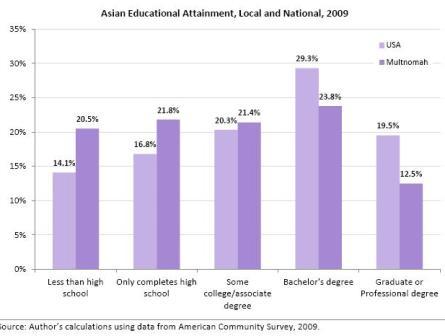 What are the statistics behind his concern? Here's one: Of the 118 children from Portland's Karen community, not a single child is reaching benchmark scores in language skills.

"I think the one thing that this means is that we have a lot of work to do: in education, in the economic field and even in the social justice field," Lee Po Cha says. "There is a lot of work to be done."

He points out that 48 percent of children in the county are kids of color. Their fate will determine our future.

"Our community needs to not be afraid to speak out as Americans and our leaders need not to be shy about being our champions."

"I'm hoping that with this data we can shape policy and design strategies to address this. So in the future we all can become contributing members of society."

At first researchers wondered if things looked worse here because of the composition of local API communities – more recent arrivals with fewer native born Americans, for example. But the data showed the opposite. About 47 percent of Multnomah County's API population was born here, compared to 40 percent nationally. And just 15 percent are new arrivals compared to 18 percent nationally.

It also looked closely at the Vietnamese community, which makes up about 30 percent of the local API population. On many measures, it was clear that Vietnamese people here are disadvantaged compared to their national and King county (Seattle) counterparts.

Ann Curry Stevens, an associate professor at Portland State University and the lead researcher for the report, said the data blows away notions that Portland is a post-racial progressive haven.

Rev. Santos-Lyons said the report also blasts away the idea of Asians as a model minority who prove that hard work is all you need to succeed in America.

"It exposes the model minority idea as a damaging and false stereotype that needs to be set aside," he says. "Within every community there are exceptions that can be held up to show the prosperity of a community and Asian and Pacific Islanders have those success stories. At the same time it damages our community and gives policy makers an excuse to ignore the real and persistent inequity."

The report acknowledges that identifying racism and White privilege is uncomfortable, but it stresses that the aim is not to point fingers at White people, but to raise awareness of inequity so all people can work together to create a level playing field where everyone has opportunities to succeed and every community's contributions are valued.
"Please know that the Asian and Pacific Islander community supports the creation of White allies in this work to advance racial justice. The community wants and needs allies for racial justice."

It singles out 14 communities as needing immediate help.

"Our most distressed communities are Cambodian, Thai, Hmong, Korean, Tongan, Samoan, Asian Indian and Laotian," it says. "And while we have only one data point for some communities, the rates of their distress in this education score is so terrible, we have decided to place these communities in the priority list: Karen, Pohnpeian, Rohingyan, Nepali (of Bhutanese origin), Chuukese and Burmese."

And it makes 11 major policy recommendations that include: Better data keeping that doesn't lump everyone together; reducing poverty; education equity; social inclusion and language training; increasing the visibility of the Asian and Pacific Islander community; giving immediate help to the most distressed communities; and identifying and naming racism.

Read the full report
More: Read The Skanner's story about the Communities of Color Report on Native Americans


Dr. James Mason talks about the challenges of working on race and diversity issues.