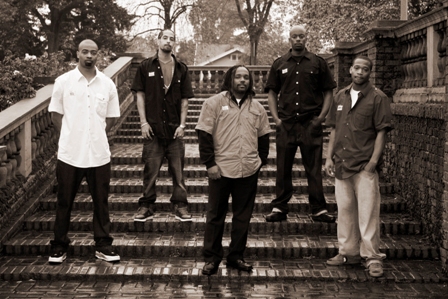 503tv wants to expose the world to a side of Portland they probably haven't seen.

"This is not the Portlandia you see on IFC," says co-creator Sadiki Stone.

Lee and Stone first took an interest in film as students in a video class at Harriet Tubman Middle School (now Harriet Tubman Leadership Academy for Young Women). They emphasize that this was before the introduction of a lot of digital technology.

In the early 2000s they began making amateur videos, mostly humorous films for You Tube.

They taught themselves filming and editing techniques through trial and error, as well as with online tutorials.

"We started out with Sony Handycams," says Stone. "There were no grants. No sponsors."

Lee and Stone, both former high school athletes, started taking filming seriously when coaches at Jefferson asked them to take videos of the team and opponents. Soon, individual players began asking for highlight tapes. They turned it into a business where players would submit footage and Lee and Stone would do the editing.

Stone says he saw the bigger picture of multimedia when he began to travel.

"I used to think we had a pretty large Black community here," he says. "If you've been out of state you've probably had people ask, 'They have Black people in Portland?' We wanted to branch out and show people parts of Portland that aren't seen."

"We have a broad range of customers and clients," says Lee. "Also, if we come across a movement that we deem worthy we'll film it."

In addition to Lee and Stone, 503tv has three other members.

Roderick Edwards is the team's South Correspondent and works out of Salem. He is focused on building the client and fan base in the Salem and Eugene areas.

Andre Barber is the marketing director. According to their website, he brings fresh ideas and concepts to the team and handles 503tv's promotional duties.

Lastly, Malik Edwards is the team's music manager. He is a Portland recording artist and childhood friend of the group who utilizes the city's music scene to help with 503tv projects.

According to Lee, 503tv helps to preserve many of the people and institutions that have been lost and pushed out by gentrification.

Both Lee and Stone grew up in Northeast Portland and have noticed the changes in the area over the years, specifically the migration of Blacks who have been priced out of their homes.

Despite the tensions caused by the change in demographics, Stone says he wants to work with newcomers to the community as well.

"We want to reach out to the skateboarders and the hipsters," he says. "They are a part of what makes Portland what it is too."

The team is working on 503tv News, which is tentatively scheduled to begin in late April.

Lee says the goal is to produce a community based news program that capitalizes on 503tv's lack of outside influences and corporate sponsors.

"The nightly news programs have a slant," he says. "We want to report and tell it how it is."

503tv is utilizing social media to help spread the word of their business.

The team is using particularly aggressive techniques on their Facebook page. According to Lee, they are marketing female t-shirts by having all the women who model them use their modeling photos as profile pictures. He says this has made a statement, as well as helped sell merchandise and promote the photography hub of their business.

"I'm inspired every time I look on TV and see something that's well within our capabilities that's making the big bucks," says Lee. "That's what motivates us and helps us to keep growing our skill set."

Stone emphasizes the importance of fans and supporters to 503tv's success. He says the team doesn't turn anything down.

"A lot of people come to us with ideas," says Stone. "We just want to thank them and let them know we appreciate it. This is bigger than us."

To find out more about their services, go to www.503tv.com . Catch 503tv's YouTube channel here.