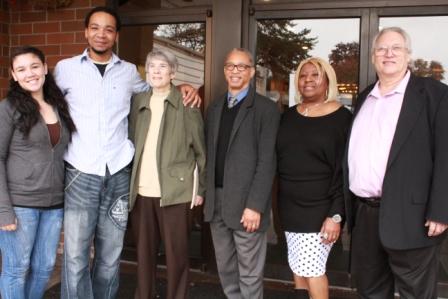 Ten Portlanders who have changed the city for the better were honored Monday Jan. 27 at the 1st Annual Salute to Black History Makers. The brainchild of Frank Taylor, co-owner of Portland Prime restaurant, the event recognizes people whose service to the community has changed lives.

Actress Robin Givens and KGW news anchor Brenda Braxton were the emcees for the evening. Tony Hopson, CEO and President of Self Enhancement Inc. introduced the event sponsors, and the SEI choir performed.

About 100 people attended the intimate gathering at Portland Prime. They included Commissioners Fish and Fritz, Paul and Geneva Knauls, and representatives from U.S. Bank, Travel Portland, SEI, the Portland Trailblazers; Safeway and PACKOUZ jewelers, who gave specially designed watches and bracelets to the honorees.

Among the achievements recognized Monday were:

Pastor W.G. Hardy brought together a group of 40 African American pastors to address issues facing our urban community. Out of that group the 11:45 Movement was formed to bring uplift to struggling youth and families.

Multnomah County Commissioner Loretta Smith has been a tireless public servant, first working for Sen. Ron Wyden and now seeking to bring jobs and resources to Multnomah County in particular for youth and seniors.

Jazz innovator Mel Brown helped create the distinctive Motown sound and played with Smokey Robinson, Diana Ross and the Temptations, to name a few. Brown now works with students and youth in addition to performing.

Larry Miller is a business leader, role model and all-round success story. A trail blazer at NIKE before heading the Portland Trailblazers, he is a mentor and youth advocate as well as an SEI volunteer. He also serves on the mayor's economic development cabinet.

Bernie Foster started The Skanner more than 30 years ago with this mission: Challenging People to Shape a Better Future Now. He's served on numerous boards and associations including as a METRO Commissioner and was one of the original founders of the Albina Community Bank.

Avel Louise Gordly was the first Black woman elected to the Oregon State Senate. She served as a legislator for three terms in the House and three in the Senate. An associate professor at Portland State University she is a passionate advocate for people suffering from mental and emotional illness and was the inspiration behind the Avel Gordly Center for Healing, which offers culturally specific treatment.

Margaret Carter grew up in the segregated South to become a musician and educator. She served in the Oregon State Senate receiving national recognition as the Black Caucus of State Legislators' Legislator of the Year, among others. She now works for Oregon's Department of Human Services, with the charge of reducing minority overrepresentation in the child welfare system.

Phil Walden inspired generations of youth through his coaching and teaching. He was instrumental in making sure many youth got to college and started numerous sports programs in schools. He also served as Superintendent of Education at the Oregon State Prison. Sadly, Coach Walden died before he could receive this award, but his "kids" promise that his name will grace a new nonprofit.

Vesia Deweese Loving is one of the main reasons that Jefferson High School still exists. After PPS decided to close the school in the late 1970s, she spearheaded a campaign to save what has become a historic institution for Portland's Black community. As co-founder of the Black United Front, her education advocacy has benefited generations of students of color.

Ernest Hartzog Ph.D. is an educator and consultant as well as veteran of two wars. Through his love of the sport of tennis, and his volunteer service at the national level, Dr. Hartzog opened doors to children who otherwise would not have been able to afford the coaching and preparation needed to play at the international level.