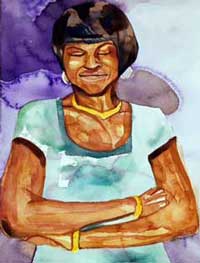 Mapping Out Our Histories

Looking for lost stories of Williams Avenue and the Civil Rights Movement in Portland
By Lisa Loving of The Skanner News
Emma Colburn is a Portland native who works with youth in the classroom. Last summer she led a New Columbia class in map-making that brought kids together with senior citizens at the Urban League. Incorporating watercolor portraits she painted of people at the Senior Center, Colburn is also piecing together a series of community maps and plans more art from Williams Avenue's past.To do that, she is counting on local residents to help her winnow down which buildings should be memorialized in the history project …. To read all about it click here 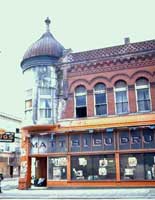 From the Archives: The North Williams Avenue That Was – 1956

A special tribute to the families who lost their homes and businesses over the years
By Lisa Loving first published Aug. 9, 2011
Doctors' offices, bike shops, groceries, churches and an ice cream store. Manufacturing, greenspace, boutiques, salons and plenty of affordable housing. If ever the City of Portland wanted a model for a 20-minute urban neighborhood, Albina in 1956 was it. Until city leaders opted to bulldoze it for "urban renewal." For Albina, the district which included the city's traditionally African American neighborhoods, 1956 represents the height of home ownership, business success and tightly-bound family connections …. To read all about it click here 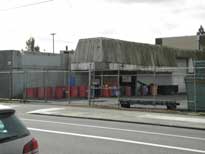 From the Archives: 'Mayor of NE' Ran Hot Night Spot

Interview with Paul Knauls Sr. by Helen Silvis first published 02-23-2005
My wife Geneva Fraser Knauls was 6 years old when she came to Vancouver, Wash., in 1946. Her dad came out from Minden, La., to work at the shipyards in Vancouver. The U.S. Army had depleted the work force, so they recruited African Americans to come here. Salaries in the South were very low, and up here they were much higher -- so everyone just packed up and came to the Northwest …. To read all about it click here 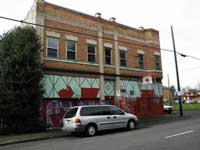 From the Archives: Club Faces Closure

Establishment under pressure from neighbors to curb noise
By Tonya Y. Parker first published on 01-06-1999
Officers of the Cleo-Lillian Social Club, a well-known gathering spot in the Albina community since 1958, said they're trying to stem the tide building against the establishment because of complaints from neighbors about noisy patrons. At the end of June, the OLCC issued the club a ticket charging it with " a history of serious and persistent problems involving disturbances" affecting neighborhood …. To read all about it click here