Black History: Mapping Out Our Communities 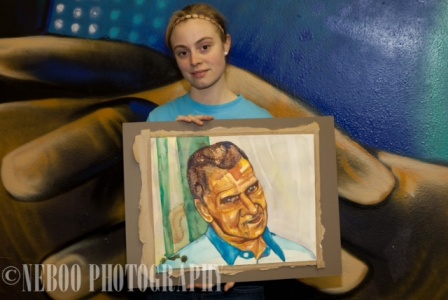 Emma Colburn is a Portland native who works with youth in the classroom, and has a passion for designing unusual educational projects to connect teenagers with their heritage and their neighborhoods.

Last summer she led a New Columbia class in map-making that brought kids together with senior citizens at the Urban League.

More recently Colburn started creating an art installation built around preserving the history of the Williams Avenue corridor. Incorporating watercolor portraits she painted of people active with the Urban League's community programs, Colburn is also piecing together a series of community maps and plans to paint the 20 most compelling buildings from Williams Avenue's past.

To do that, she is counting on local residents to help her winnow down which buildings should be memorialized in the history project.

The Skanner News: Tell us about this history project that incorporates art.

Emma Colburn: The project is called Vibrant Heirlooms. I first moved back to Portland two years ago, I heard that they were going to be creating this development at the Coliseum called Jumptown, to capitalize on the history of the neighborhood while also playing reference to the Blazers. So that's when I first got involved, because I had been involved in cultural heritage tourism in Chicago and in Wisconsin and through working out there I realized that sometimes there's a potential for cultural heritage tourism but that also for it to go the other way and become kitsch if it wasn't well done.

So I wanted to see what was going on with that and learn about some of the neighborhood's history myself. So I ended up writing a grant that was funded by the Regional Arts and Culture Council. Originally it was called "Vanishing Heirlooms," and it was the same project but once I got into it I said, wait, it isn't vanishing, it's still very vibrant. So I changed the project title to Vibrant Heirlooms.

TSN: When you say heirlooms and you mean buildings?

Colburn: I'm talking about both the architecture of the neighborhood and the people that passed on that inheritance. Also the people who are inheriting it, which I consider to be the children of the neighborhood and also the newcomers to the neighborhood. It's called Vibrant Heirlooms and it's a series of watercolor portraits of seniors who go down to the Loaves and Fishes center on MLK. Some of them lived in Portland, as well as Vanport and The Villa (Columbia Villa), and the Boise-Elliot neighborhood, and some of them are newcomers. Like if they didn't spend a lot of time in Portland and they got here in the 70s.

Colburn: That's how people describe themselves here – 'oh I don't really know about that, I'm a newcomer, I've only been here since the 70s.'

So what I realized as an educator is we teach our students year after year about Civil Rights, and we always talk about the same leaders in the South. I think that's a problem because I think we

need to teach young people how to see their history in their everyday landscape, because that makes them more engaged in the subject that you're teaching. Like, oh, I go past that every day, the civil rights movement wasn't just something that happened in the South, and I think it's important that we understand how it impacted our daily experiences. So as an educator it's frustrating because there's not a lot of  curriculum – I don't know of any curriculum about Portland civil rights, civil rights leaders in Portland, places where rallies happened, even acts of segregation happened – like where is the document that lists all of the places where Black people weren't allowed, that had "Whites Only" signs. I'd like to see that, because I'd like to share those locations with my students instead of reading a picture book about MLK.

So the wider picture of this project is that it will be turned into an arts-based geography curriculum about civil rights movement using local geography. So it will be map-based. Also we'll use portraits and the art of portraiture to teach that local geography.

TSN: Did you already start to do that this summer with your students at New Columbia?

Colburn: That was a beginning, more for myself as an educator. What we did do was personal interviews with people at the senior center who had grown up in the Villa when it was the Villa and not New Columbia. We spent time every week down there sewing – they taught us how to sew, and that was an icebreaker-introduction. Because then one week we broke up into one on one interviews with the seniors, who remembered growing up there, about it.

That program was very short, so we didn't follow it through the way that I envision doing it eventually. I know that it was meaningful for the seniors, and those are the seniors that I painted. I followed up, for myself as an artist. Now that I've painted the images they're going to be installed at the Urban League, on Russell, so that's exciting. We're going to have a reception with the seniors there.

Right now I work with a group of students at Grant, I work as an assistant at Grant. We're studying Black History, and we're starting out with national leaders but by the end of the month I want to bring in information about local civil rights leaders. I'm looking for them. So that's what I'm looking for now. I'm interested in the 'ghost map' series that you guys are doing (see The Skanner News, Aug. 9, 2011, 'Portland Gentrification: The North Williams Avenue That Was – 1956'). The students that I work with now are all on the autism spectrum; a lot of them are really artistic, so I'm thinking that even if they don't get all the big concepts, we can create collaborative collages of maps or even individuals can make their own images for a heritage map.

TSN: What you would like to do is connect with people in the community who want to share stories and help create a historical record of civil rights in this area – especially lost history, things that aren't written down.

TSN: Explain that – the 20 locations. You're trying to narrow down the 20 places that you think people really valued?

Colburn: That original ghost map that you made from Multnomah Avenue up to Killingsworth, there's over 100 locations. But we want to choose --  with the help of local people that lived there – which are the 20 heirlooms, the pearls, the diamonds, which ones have the most interesting stories that could go along with a photograph. It doesn't have to be the most well-known places, but the places that are more personal, a memory that somebody had that was more sensual – a flavor of something they ate there. I work with a lot of nontraditional learners, so the sensory details could be used for classroom assignments. I once made a smell map, where each place on the map was a smell memory, 'this was the place where I smelled cinnamon rolls.' A lot of people do sound maps – it's the same idea. Just a map of your sense. I think that could be a really valuable tool because for me it always comes back to the point – the educational point that I want it to be ultimately used as a curriculum.

The other 'ask' is for geographically relevant civil rights information.

Participate with Colburn's map projects by calling her at the McCoy Academy, 503-281-9597