Tyree Harris Wants to Change the Culture of the College Newsroom 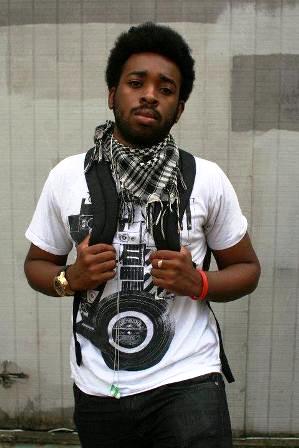 When Tyree Harris first started writing at the Oregon Daily Emerald, the University of Oregon's (UO) daily newspaper, there were no other Black people on staff.

"Journalism is traditionally a white man's club," says Harris, who is now the Emerald's editor-in-chief. "It's a really weird time in college journalism. You have two Black leaders of major college news organizations in the northwest."

Along with Brandon Southward, editor of Oregon State's Daily Barometer, Harris represents a change in the culture of Oregon's predominantly white college newsrooms.

Initiating discussions about race is something Harris has done since he first took an interest in journalism as a sophomore at Parkrose High School, where one of his teachers recommended that he apply for the school newspaper and he has been enamored with the field ever since.

"Having a lot of people in school discussing the issues I brought up in my columns made me realize how powerful a writer is in society," says Harris.

While he was attending a minority camp at the Oregonian at the end of his senior year, Harris decided he wanted to write for the Emerald. However, the path to that dream wasn't as smooth as he had envisioned.

Harris applied to the opinion staff his sophomore year at UO, but had trouble getting an interview.

At first he was discouraged but when a position opened up two months later, he decided he would make the most of the opportunity.

He came with a column idea in mind. It was going to be called "In These Eyes" and use personality profiles to convey arguments through the perspectives of his interviewees. Harris had two story ideas already prepared.

"I wanted to put myself in a position where they had to hire me," says Harris. "It definitely made me hungrier and more aggressive."

In a short amount of time, he became one of the paper's most popular writers for his willingness to tackle controversial topics.

By his junior year, he was promoted to Opinion Editor.

As he has ascended to the top of the Emerald staff, Harris says he couldn't have picked a better time to be editor-in-chief.

He says the Emerald's coverage of the firing of former UO President Richard Lariviere was a testament to the change in the culture of the paper.

"When something big like that happened, our newsroom was right in the middle of everyone else, throwing in new pieces of information, seriously contributing to the narrative," says Harris.

He says a man who used to work at the Oregonian even wrote him, saying the Emerald's coverage was just as good or better than Oregon's major news organizations.

Harris is most proud of his staff.

He glows when talking about one of his writers who recently broke a story that the Associated Students of University of Oregon (ASUO) Vice President was married to the former chair of OSPIRG, a consumer group that lobbies on campus.

Harris also makes sure to credit the Emerald's publisher Ryan Frank for making him more professional and teaching him the subtleties of the industry.

The result has been overwhelmingly positive feedback since he took over as editor. Readers tell him the paper has improved visually. The Emerald has also expanded into live streaming and now tweets updates throughout the day.

"Now we have good weeks as opposed to good days," says Harris. "Everyone's working towards the point where they can say, 'the Emerald made me professional.' "

Although there is little diversity on the Emerald staff, Harris says he's never experienced a hostile work environment. If anything, he says most of the hostility comes from the comment sections on the Emerald website.

In response to an opinion piece Harris did on racial profiling, one reader who went by the name of "tyree=troublemaker" said, "I suggest growing up, tyree and quit trying to bring everybody down with your editorial pieces who you don't agree with or happens to tell you to quit talking out of turn."

Throughout talking with Harris, it's hard not to notice that he stays attached to either his keyboard or the mixer on his computer.

When he's not pulling strings behind the scenes at the Emerald, he's constantly working on music.

His background as a musician has also contributed to the change in culture at the paper. The Emerald is currently working on a documentary on hip-hop culture in Eugene.

Harris doesn't think the paper would pursue this kind of project if he wasn't in charge.

He recently released a mixtape entitled "Space Run," but says there are no projects currently planned because his first priority is journalism.

"If you miss a beat everyone knows," says Harris. "I'm a representative of everything that goes right and wrong in the newsroom."