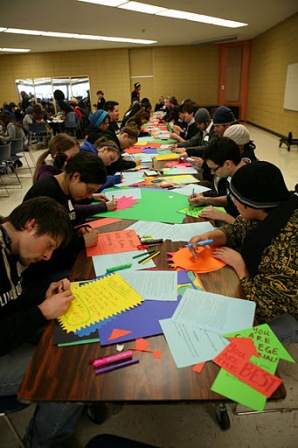 Despite near freezing temperatures, volunteers were out in droves to participate in last weekend's United Way Martin Luther King Jr. Weekend of Service.

"I'm amazed by the number of people who choose to volunteer," says interim senior communications manager Karen Kane. "Out of 105 projects we only had ten that were not completely full."

In total, 2,874 volunteers participated in the event (the pics on this page are from the United Way event at Roosevelt High School in North Portland).

The United Way held projects in locations from Ridgefield, Wash., to Oregon City. According to Kane, children as young as four participated.

She says it was heartening to see how many people understood the value of service and how it furthers Dr. King's message.

"Some people can donate money but they actually came out and worked," says Kane.

Carolee Lee, vice president of marketing and communications, says the weekend of service began five years ago. She says the United Way wanted to have a day that focused on volunteerism.

The group already has a number of community care days but Lee says they wanted to connect their service with Dr. King's message.

There were a variety of both indoor and outdoor activities, which included preparing food and beautifying schools. The weekend of service lasted from early Friday to late in the evening of Martin Luther King Day.

There were a number of activities that focused on children's needs.

This coincided with Dr. King's focus on poverty, which has a specifically detrimental effect on children.

According to a 2011 report by the Oregon Commission on Children and Families, about 20 percent of Oregon's children live in poverty.

For Oregon's Black children, that number is 49.3 percent.

Statistics show that poverty can have negative effects on things like educational achievement. According to the OCCF report, economically disadvantaged children graduate at a 14 percent lower rate than their

In response, volunteers also provided tools like books and computers for kids.

The computer initiative was held at Free Geek, where volunteers refurbished computers for students and non-profits.

In addition, volunteers provided other basic needs for children.

For example, Kane says around 100 people participated in the Binky Brigade, which made blankets for children. She says 30 people brought their own sewing machines.

At Centennial, volunteers wrote letters to ill children to help encourage them.

The weekend of service also included ongoing efforts such as prisoner outreach.

One of these activities was "Answer Prisoner Mail with Partnership for Safety and Justice".

"We've seen so many people come out that don't have the tools they need," says Carolee Lee. "Part of this is making sure they do recover in prison and are able to turn their lives around and part of that is making sure they have letters and know that people care about them."

Dr. King and the Civil Rights Movement as a whole put particular emphasis on voter disenfranchisement and systematic poverty. Both of these are consequences of mass incarceration in the United States.

According to Michelle Alexander's book "The New Jim Crow: Mass Incarceration in the Age of Colorblindness", a higher percentage of Black people are incarcerated in the US today than were locked up in South African during Apartheid.

Currently, Blacks make up about two percent of Oregon's population but nearly ten percent of the prison population.

Having an arrest on your record can bar you from public housing while a conviction prevents you from receiving food stamps and voting, as well as allows employers to legally discriminate against you in the hiring process.

"By the time they get out a lot of time has passed and people don't know how to get reentry," says Lee. "Sometimes they just need a little help and that's why we're here. To help people in the community."

Kane sees the response from the community as evidence that the program has been a success. She says that she received telephone calls throughout the MLK holiday, as well as tweets on the United Way twitter page, that praised the work of volunteers.

Service locations, such as Roosevelt High School, were blanketed with volunteers in United Way t-shirts throughout the weekend.

Both Kane and Lee hope that the enthusiasm shown during the MLK Weekend continues after the holiday.

"We're encouraging everyone to volunteer not just today but all year round," says Lee.