For coach Naaman Yarbrough football is more about winning lives than winning games. He cares a lot less about blocks, tackles and scores than he cares about the hearts and minds of his players.

"The boys are my main concern," he says. "Because when you look around at our community, we're lacking men. We're starting with these little boys and we're trying to guide them through all this garbage out here and turn them into men.

"That's when we win. We don't win at the finish line. We win when we see them graduate."

Yarbrough, in his fifth year of coaching at the youth development nonprofit Self Enhancement Inc., has just won the prestigious 2011Wellnitz Award, for outstanding Sportsmanship.

Supremely modest, he insists that it's not him, but the entire SEI family who deserves the award. Yarbrough goes down the list of everyone who contributed to his success, starting with his fellow coaches, Anthoney Deloney, Tony Melson, Alex Robinson,  Donovan and Damien; going on to credit the boys on his 3rd and 4th grade and 7th and 8th grade teams, his own mentor Richard Fortson and several more SEI staff, before ending up with SEI president Tony Hopson and the donors who, "make it all possible." 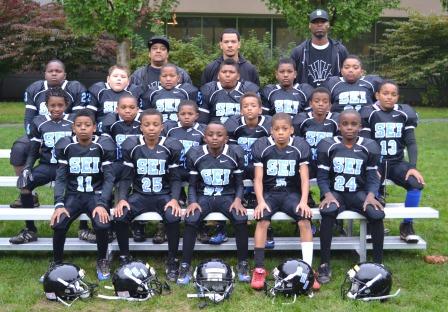 That's news to SEI's head coach, Tony Melson. "Naaman is committed, dedicated and just flat out a good coach," Melson says.  "This is an extremely difficult award to win, and it is well-deserved. Naaman had quite a few younger and inexperienced kids on his team this year. Not only did he coach them to victory, he managed to teach them the value of true sportsmanship."

The award honors Kirk Wellnitz, the son of a Tualatin Valley coach, who lost his life while training with the Air National Guard. The Wellnitz recognizes coaches whose teams display the highest standards of conduct.

Yarbrough's teams show that superb sportsmanship, as well as playing like champs. His 2008 3rd and 4th Grade team won eight games to zero giving up just one touchdown all season.

Yarbrough got into coaching almost by accident. His son was a keen football player on a third grade team when one of the coaches had to leave midseason. Yarbrough stepped up, and has never looked back. It means a lot to him, he says, partly because he was forced to drop out of football in his sophomore year of high school because he didn't have a stable home life.

Today, working with some students who face similar challenges, Yarbrough can be the stable force in their lives.

"Your circumstances when you go home might be terrible, but when you go out there on the football field, you can control who you are," he says.

Yarbrough helps transport players and he welcomes them into his home. Some keep coming even when they move into high school.

"They just want to hang out," he says. "They want to be in a situation where they can feel confident and safe and not have the stress of everyday life."

As one of the first students to be mentored through the Self Enhancement Inc. program, Yarbrough remembers selling bricks to raise money for the building. And he credits his SEI mentor for helping him find a productive path in life. He got his first job immediately after high school and currently works as a billing specialist for Oregon Sleep Associates. He became a father early, at age 20, and now has two children: Naaman Jr, 12, and Caalyn, 10.  He wants a better life for them, he says, and for every student he works with. So far he has coached every kid on the SEI football roster except the fifth graders.

His students are a mixed bag. Some players have turned out to be star athletes. And this year he had several players who were very easy to coach.

Of course, not all players are little angels, especially when they lack stability at home.

"Some kids are full of energy and you have to harness that," he says. "You get some aggressive kids out there. And I was an aggressive kid too. So you teach them about responsibility, teamwork and all those aspects of life. You teach them through sports. It's a real joy to work with those kids."

Yarbrough sees football as an ideal arena for character development because the game demands so much from everyone involved.

"When these kids get on the field they're fighting for each other and risking their health for one another. When they are out on that field they are all they've got. So the level of respect they have for one another is different."

That camaraderie continues even when athletes choose other sports in high school, he says.

"They'll wrestle and pick at each other, but they have each other's backs."

All the coaches and teams at Self Enhancement want to give SEI donors a reason to be proud of them. But most of all, Yarbrough says, they want the players to grow up happy and successful.

"Some coaches look at wins and losses: I'm looking at growth," he says. "And I'm talking about growth as a person, not just as a player. Being a good player is great. But it's how you carry yourself, the confidence you have in yourself, and the level of respect you bring: That stuff matters."