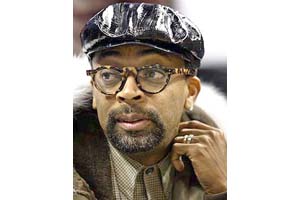 NEW ORLEANS"From the beginning, Spike Lee knew that Hurricane Katrina was a story he had to tell. Watching the first television images of floating bodies and of desperate people, mostly Black, stranded on rooftops, he quickly realized he was witnessing a major historical moment.
As those moments kept coming, he spent almost a year capturing the hurricane"s sorrowful consequences for a four-hour documentary, When the Levees Broke: A Requiem in Four Acts, to be shown on HBO this month.
The film, which Lee directed and produced, comes 20 years after the August 1986 debut of his first hit, She"s Gotta Have It. The provocative films that followed " Do the Right Thing, Jungle Fever and Malcolm X, among others " with their searing cultural critiques, cemented Lee"s reputation as his generation"s pioneering Black filmmaker.
Like him or not, Lee, 49, is an artist many people feel they know. People, Black and White, approached him and his crew here, he said, imploring him to tell the story, tell the story. It becomes like an obligation we have, he said.
Lee"s reputation helped get his camera crew into the city"s water-soaked homes, he said. It allowed him to stretch out a complex story, with themes of race, class and politics that have too often been sensationalized or rendered in sound bites.
He received permission, for example, from Kimberly Polk to film the funeral of her 5-year-old daughter, Sarena Polk, swept away when the waters ravaged the Lower Ninth Ward. "She came to me in a dream," Ms. Polk says in the film. "She said, "Mama, I"m falling." "
Levees opens with the Louis Armstrong song, "Do You Know What it Means to Miss New Orleans?" and offers black-and-white images of the city"s Southern-with-a-twist past " Mardi Gras, Confederate flags " interspersed with scenes of children airlifted from demolished houses, a door marked "dead body inside."
The film lingers on the politics of disaster response, the science of levees and storms, the city"s Creolized culture, the stories of loss. Many faces are familiar " politicians like C. Ray Nagin, the city"s mayor, and Kathleen Blanco, the governor of Louisiana; celebrities like Harry Belafonte, Kanye West, the Rev. Al Sharpton and Sean Penn; and the native son and trumpeter Wynton Marsalis, who talks about New Orleans as the birthplace of jazz.
"It"s like somebody violating your mama," Marsalis says of the flooding.
Lee said he intended most of the Levee stories to come from the ordinary people who endured the Superdome"s makeshift shelter or long searches for loved ones. So Levees includes many people like Phyllis Montana LeBlanc, depressed and outraged after her family was evacuated to different places around the country while she waited four months for a government trailer. The first half of Levees was shown free on Aug. 16 to 10,000 people at the New Orleans Arena. HBO is to show the first two hours of Levees at 9 p.m. Aug. 21, and the last two at 9 p.m. Aug. 22. It will be shown in its entirety at 8 p.m. Aug. 29 " the anniversary of the hurricane, one of the country"s worst natural disasters.
"Politics. Ethics. Morals," Lee said, when asked what Levees was really about. "This is about what this country is really going to be."