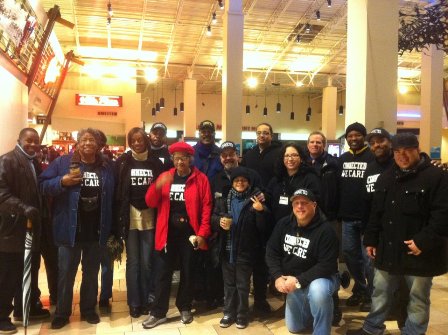 The Connected program, which in 2011 sought to bring 100 men out to a major gang hotspot every Friday night as a way to build positive relationships with young people, is branching out.

Now, organizers say, they're turning their efforts towards organizing 100 women to reach out to youth as well – particularly gang-influenced girls.

The effort comes as a spate of suspected gang shootings over the weekend saw bullets flying into a home and into a car with children inside.

The Portland Police report a string of incidents Sunday started with a drive-by just after 2 p.m. at a residence on Southeast 72nd Avenue where young kids were at home; about 15 minutes later shots were fired at a home on Southeast 162 Avenue; and a third drive-by was reported just before 3 p.m. at Southeast 143rd Avenue.

At 3:06 p.m. shots were fired from one vehicle into another near the intersection of North Williams Avenue and Fremont, injuring one of the children inside the car, but not seriously.

A fifth shooting was reported Monday night near North Iris Way and Swenson Street. Police are investigating whether all the incidents are related; injuries were reported but none were life-threatening.

The park had been considered a major hotspot for violence even before 14-year-old Shiloh Hampton was shot to death there last April; investigators say he had no ties to gangs and was an innocent bystander in the line of fire. According to the Portland Police, the city had eight gang killings in 2011 and more than 100 gang squad call-outs – an upswing by any measure.

"Women, for this particular call, are significant because we will be attempting to approach many of the young ladies in our community who are also impacting the males' behavior," said Connected founder John Canda.

"Initially I made the call to 100 men, which we're working on and I'm glad to say we're growing toward our goal numbers," he says.

But shortly after the initial call for participation Canda says he started receiving messages from women who felt left out of the effort.

"And I absolutely had to apologize and say, everybody is invited always, but specifically I wanted men to come forward because they have the problems, or, more difficulty, with showing up.

"If they want to be involved in the first project they can, but I wanted to specifically make a call for women and make the same appeal but different -- to work specifically with the young ladies," Canda said.

Canda stresses that all volunteers are welcome to participate in Connected in any way they wish, but that the group started recruiting male volunteers first for a reason.

"Fathers have just not been present -- for many different reasons -- that is not intended to disrespect anyone. I know that every situation is different," he said.

"However increasingly, internationally, we've heard about fathers being absent, or not taking a particular interest in their children and abandoning families.

"Most of the young people that I have worked with in the past 25 years -- sadly that fact has been in the forefront, that they've grown up without fathers," Canda says. "Which, in my mind, and others believe, is a cause for a lot of the delinquency that we see."

Canda said that typically women are already present in the lives of the young people.

"The relationships that I've seen most young people have, particularly young men, have been with women in their family, and so they tend not to have the same problem relating to and with, women," Canda said. "Fathers, or men on the other hand, I think have been the cause of many things happening – and not happening – in the lives of children."

Canda says Connected will continue to walk through Holladay Park Friday nights from 6 to 8 p.m., but he hopes the new female volunteers can fan out through the city to build even stronger relationships with young women.

"We have some different things in mind," Canda told the Skanner News this week.

On Dec. 29, Canda posted this call on Connected's Facebook page:

"This is a Call to 100 WOMEN that are not only concerned but ready to stand up for what is right, to connect with the young girls/boys of our communities and teach them how to act, how to cook, how to sew, knit, crochet, communicate, think, what love really is, how and whom to love. To influence their behavior by influencing their thought process. To create positive opportunities they would not normally have. To encourage them by spending time with them and modeling the appropriate behaviors. To explain in ways they understand the lures of fast living/money/gang-banging by some of you who have experienced that lifestyle! LADIES, ARE YOU READY?"

Canda says about 75 women have stepped up so far.

"So that translates into lives of the young people, and I see it in their eyes," he says. "If they let you in, and if they feel safe enough around you, oftentimes when asked they'll talk about their childhood or where they're at now, and the lack of a relationship with a positive role model in their lives."

Find out more on Connected's Facebook fan page, in person at Holladay Park on Friday evenings at 6 p.m., or by emailing Canda at johncanda@comcast.net.