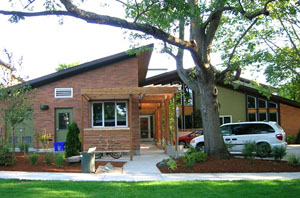 A new building will house Our House of Portland, an in-patient hospice care facility for people in the advanced stages of HIV and AIDS.
The project included the demolition of the existing, aging residential care facility and construction of a $2.4 million two story, 14,500-square-foot building. The facility was expanded from 10 single and double occupancy rooms with shared toilets to 14 single-occupancy rooms with private toilets.
It also includes an upgraded kitchen, nurses" station, administrative offices and expanded common spaces including a grand entry, dining room, living room, therapy room and sitting rooms. The landscape includes large trees, a public rose garden and a private backyard.
The building was designed by Carleton Hart Architecture.
"This amazing new state-of-the-art facility maintains the "home-like" atmosphere of the old structure and will allow us to give our residents much more comfort and privacy while creating a more efficient atmosphere for staff," said Wayne Miya, Our House"s executive director.
"The close collaboration and generosity of Carleton Hart and TEAM Construction working with Housing Development Center and Our House helped keep this project on time and within budget."
The project is being financed through a combination of public and private dollars. In January 2004, the department of Housing and Urban Development awarded Our House a grant for $1.3 million over three years, one of only 10 such grants awarded nationally. 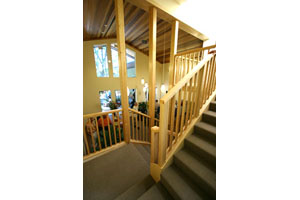 Our House also received a $645,000 grant from the Portland Development Commission and $285,000 from the Bureau of Housing and Community Development in a local allocation of Housing Opportunities for People with AIDS.
Our House also launched its first capital campaign. So far, over $5 million has been raised, closing in on the goal of $5.4 million.