Man Dies at Controversial Center for Street Alcoholics in Alaska 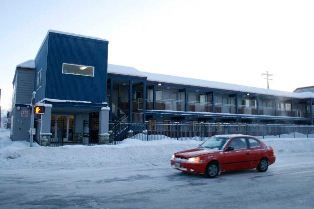 ANCHORAGE, Alaska (AP) -- A man who was slurring his speech and appeared intoxicated was found dead on New Year's Day at a controversial center in Anchorage where chronic street alcoholics are allowed to keep drinking.

The center has been under fire for its unconventional approach to dealing with alcoholism in Anchorage, where advocates have been looking for new ways to help homeless alcoholics after more than 20 people - most of them severely intoxicated - died outdoors over a 12-month period in 2009 and 2010.

Employees checked on 54-year-old John Kort several times Sunday after a visitor noticed that he appeared drunk and was having trouble walking. Kort was escorted to his room where a manor employee lay him down on the bed and rolled him onto his side. When he was checked 40 minutes later, Kort was sitting on the floor with his head against the bed. He again was placed on his bed and on his side.

When an employee checked on him a third time, Kort was face-down on his bed, not breathing and his hands were cold, said Anchorage police spokesman Dave Parker. Police and paramedics could not revive him.

Parker said there was no suicide note. Alcohol and perhaps pills are believed to be factors in his death. An empty prescription pill bottle was found in his room.

Karluk Manor, which opened less than a month ago in a former Red Roof Inn, is based on the Housing First model that maintains that chronic alcoholics are best-served by providing them with safe housing as a first step toward self-sufficiency and eventual integration into the community. The manor was modeled after the 1811 Eastlake project in Seattle, where hundreds of housing units have been provided for chronic alcoholics.

The experiment has caught on in other cities as well - sometimes with positive results. A 2009 study in the Journal of the American Medical Association found that Seattle's program saved taxpayers more than $4 million a year and credited the system with helping many alcoholics kick their habit.

Karluk Manor residents each pay $50 a month for a 220-square-foot furnished efficiency with a private bathroom. Each unit has a microwave, small refrigerator and dining area. Residents are allowed to drink in their rooms.

Deaths were expected to occur at the 46-unit facility. The program's management plan has a section titled "Procedures in the Event of Death."

But Kort's death highlights the problem with Karluk Manor, said Michael Howard, president of the Fairview Community Council, which opposed the opening of the manor in the neighborhood already dealing with its share of homeless alcoholics and associated problems.

"A situation like this is sad," Howard said Tuesday. "To say this is working ... there is fundamental disagreement."

She said he had been homeless for about 20 years, and spent the last 10 years in Anchorage.

"In addition to his chronic alcoholism, he had multiple medical conditions and he was in very fragile health," she said in a prepared statement. "There are no suspicious circumstances related to Mr. Kort's death and we were grateful that he passed away in a caring and compassionate environment."

Howard said one of the biggest problems is where the manor is located, on the edge of downtown Anchorage. The neighborhood has too many liquor stores to be an appropriate location for the manor, he said.

Not only is it unfair to local residents and businesses but also to the chronic alcoholics living at the manor, Howard said.

"Karluk Manor is planting them again in the problem area," he said.

The manor's management plan says that at any given time in Anchorage there are about 1,700 homeless people and of those 300 to 400 are chronically homeless alcoholics, having lived on the streets from five to more than 20 years.