University of Oregon Study on Football and Grades Leaves Some Skeptical 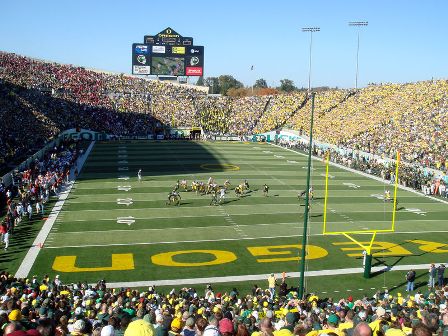 University of Oregon researchers recently released a study that concluded the football team's success reduced male students grades relative to female grades. It also questioned the allocation of subsidies to the athletic department.

The study utilizes a survey of 53 percent of students who have attended UO for two or more years, and suggests males are more likely to increase alcohol consumption, decrease studying and increase partying when the football team is doing well.

"There's nothing you can do unless you change the culture of the university," says UO student Tyree Harris. "How many rushing yards can the science department get?"

In addition to the survey, researchers collected fall term GPA data from 1999 through 2007.

During mediocre football seasons the researchers found a relatively small gap between male grades and female grades. However, during seasons like 2001 and 2005, where the ducks went 11-1 and 10-2, respectively, the gender gap widened.

Female grades were also affected but the study suggests that grade curving masked the severity of the results.

Elizabeth Hope, who also attends UO, suggests that the gap between male and female achievement during fall term could be due, in part, to societal constructs.

"I know a lot of guys that get together to watch games," she says. "A lot of girls watch games too but they are less likely to throw keggers."

According to the study, only ten percent of female students watched zero football games in 2010. Even fewer males reported not watching a single game.

Across racial lines, the survey found that black male students are the most affected by the football team's success.

"There are relatively few non-white students so those results are suggestive at best," says Isaac Swensen, a coauthor of the report. "80 percent of the sample were white students."

The lack of Black students is one of the reasons Harris is skeptical of the study.

"Even if they interviewed every African American student there still wouldn't be a reasonable survey size," he says. "I don't buy it right now. There could be other factors like the economy. Plus fall term is weird for many students anyway."

The researchers acknowledge that most of the hype generated for the football team comes from students rather than the university's promotion.

Some examples include students wearing athletic apparel around campus and attempting to lobby their professors for leniency on game days during the school week.

In response to the survey question, "Does the success of the University of Oregon football team decrease the amount of time you study for classes?", males were more than twice as likely to answer "probably" and "definitely." However, the majority of both males and females responded "definitely not" and "probably not."

Both professors and students acknowledge that the school tries to work with students when conflicts arise with athletic events and class schedules.

Harris says the university sent out an email last January to professors to be more accommodating for the BCS Championship game.

For example, UO professor Peter Laufer arranged a compromise that allowed one of his students to miss class and instead, complete an alternate assignment that incorporated his trip to Arizona for the game. As a part of an interview class, he assigned the student to interview one person at every gas station he stopped at and then compile an essay from the series of interviews.

"If there is going to be an absence, it can be negotiated to become an asset and used as an opportunity," he says.

Laufer, however, says that this was a rare occurrence. He says diminishing grades and lack of focus due to sports are not issues for his classes.

Nonetheless, researchers suggest that the gender gap in grades and the seemingly negative effect of football season on GPAs across the board can be addressed by a reallocation of resources to academics.

The report points out that 211 out of 218 Division 1 athletic departments received subsidies in 2010. According to researchers, the average subsidy increased 25 percent to nine million dollars from 2006 to 2010.

"Our results suggest the subsidies should be the other way around," says Swensen.

However, Swensen admits the researchers weren't able to obtain specific information on subsidies received by UO's Athletic Department. Also, he says there haven't been studies on the effects of other sports seasons on student grades.

Hope suggests the student body's fixation with football might come down to a simpler issue.

"The whole school can't really rally around the science department," she says. "However, everyone can participate in football in some way."