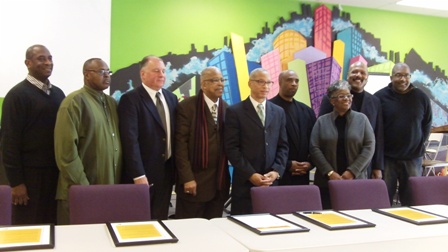 Over half of Multnomah County adults and one in four children are overweight or obese.

"Sugar is the number one drug in America," says Bishop Stephen Holt of The International Fellowship Family.

The new policy recommends that all events held in buildings owned by the participating faith congregations provide refreshments including healthy alternatives to promote healthy food and beverages as the right choice.

This is part of the larger Center for Disease Control Healthy Communities ACHIEVE Initiative, which in Multnomah County has been led in part by Pastor Will Hardy of Highland Christian Center.

Unhealthy eating habits have been tied into Black culture dating back to the Trans-Atlantic Slave Trade. Enslaved populations were given limited choices -- often the food the masters wouldn't eat -- for their diet. This became known as soul food.

Although eating these foods was a survival technique, the practice has endured. Many events in black communities are catered with fatty foods, as well as sugary beverages.

Even though these unhealthy eating practices are not a part of the cultures in African countries, they have an impact on African immigrants as well.

According to Abd'Hafidh Ibn'Abdullah, the Amir of the Muslim Community Center of Portland, this ties into American consumer culture.

"Once immigrants become Americanized they adopt the consumer excess lifestyle," he says. "We have to counter that effort. It's part of our tenants and beliefs and good for the well being of the community at large."

In 2004, former Surgeon General Richard Carmona testified that this may be the first generation to have a shorter life expectancy due to increasing rates of obesity, unhealthy eating habits and physical inactivity.

"This initiative is way overdue," says Bishop C.T. Wells of Emmanuel Temple Church. "It does us no good talking about the spiritual man without the physical man."

According to Rachael Banks, program supervisor for the Community Wellness and Prevention Program at Multnomah County Health Department, the county began working on this initiative five years ago.

The county set up a policy action team, including some 30 community organizations, to address the health disparities in the black community -- one of only two regions in the nation to take this approach.

"Our community has been hit hard," says Banks. "We need more focused policies to provide access to healthy foods."

She says it's important for the faith community to get involved because it impacts people on a variety of levels beyond just spirituality.

Pastor Hardy and other faith leaders estimated Thursday that, together, they have an impact on anywhere from 50,000-60,000 people throughout Multnomah County.

Through grants from ACHIEVE and Community Putting Prevention to Work (CPPW), which is part of the American Recovery and Reinvestment Act, Multnomah County has also begun the Healthy Retail Initiative. The program works with 20 ethnic food stores to help empower African, African-American, Latino and Asian communities and counter institutionalized excess culture.

Part of the initiative is for larger retailers like Whole Foods to offer free training in things like produce handling, refrigeration and electrical capacity analysis. There is also a social marketing campaign, complete with billboards and television commercials.

She hopes enlisting the help of faith leaders will allow the program to reach people where they're looking to make change.

"If you had asked me ten years ago I wouldn't do it," he says. "Now I'm a recovering sweet-aholic. I've seen far too many deaths. There are far too many pharmaceutical investments due to the cooking style."