Video: Thressia Del Colbert at 100 Years Old Is Sharp As a Tack and Full of Wisdom 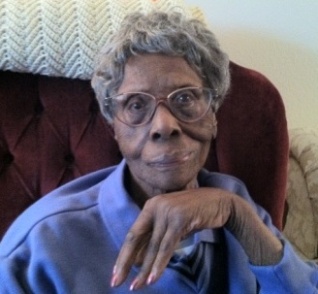 Ms. Colbert's relatives and friends gathered at the Crowne Plaza Hotel, Saturday Dec. 3 to celebrate her amazing life, and testify that 'Aunt Stell' has inspired four generations of young people to work hard and achieve.

"I consider her like the glue that holds our family together," says her nephew Willie John Kelly, who is 76. "She helped our whole family. Everything she did was positive."

Born Nov. 28, 2011 in Linden, Texas, Colbert was the oldest child of Augusta and Willie Osborne Walton: farmers who grew and sold cantaloupes, tomatoes, okra, cucumbers, peppers and watermelon on 160 acres of land bought in 1898 and still owned by the family. With chickens and cattle providing milk and meat, the family was self-sufficient in food.

"We had the garden and we had everything we needed," Colbert says. "At that time there were not many cars. The only car you saw was the mailman. You saw horses, mules and donkeys."

When Colbert was just 8 years old, her mother died of an undiagnosed illness.

"I had a brother and two sisters, and when my mother passed I had to look after that little crew," she says. Colbert's grandmother, Lila Wilkins, worked for a well-to-do family who lived at 2220 Grand Ave., Dallas. She remembers the address because she was the one in the family who wrote the letters. Her grandmother often sent care packages to help the family.

"We were some of the best-dressed little kids in that town," she says.

In 1935, Colbert went to Houston and worked as a janitor for Sears Roebuck so that she could attend Houston College. That's where she met her husband, Andrew Colbert, a football player. Colbert says she was astounded by how much the other students ate. "I never knew people to eat like this."

At 14, you could get an adult job, she remembers. And during hard times, many of the young men she knew signed up for the services. She found work at the Lone Star Rifle Co. making shell casings for M1 rifles.

Colbert remembers the crime sprees of Clyde Barrow and Pretty Boy Floyd. And that during the Depression many people were constantly on the move looking for a way to survive.

"So many people don't have jobs," she says. "Times are repeating themselves pretty fast, because at that time people did not have jobs and they came from every direction."

"They said some of those ships hadn't been cleaned in 12 years," she says. "We were cleaning those ships and getting them ready to go overseas and back.

"The guys were joining the Longshoremen and getting pretty good pay. But those guys weren't cleaning the ships. The union hall was at 4th and Morrison, and they had jobs. You could sign up to be a merchant seaman or work in the shipyard."

The Colberts moved to Vanport and began arranging for other family members to join them. Colbert drove down to Texas to bring the children to Portland.

"She was very instrumental in bringing people here," says Kelly. "First she sent for my youngest sister and her husband. Then she sent for my dad and my mom and five of my siblings. There were eight of us and three of us stayed behind for another six months. I was 10 when my dad sent for us. That was our family in 1946."

Colbert only gave up driving three years ago, when she was 97. And she still has a great memory, vividly recalling the events of the Vanport flood of 1948.

Kelly, who was 11 at the time, also remembers that day. Everyone believed that a lot of people were drowning in the flood, he remembers. Even now he finds it hard to believe that the official count was just 15 lives lost.

After the flood the children in the family had to go to different schools. Some went to Chapman Elementary, others to Elliot. Families had to stay in makeshift shelters for more than six months.

"They didn't have anything," Colbert says. "Just what Goodwill and the Salvation Army gave them."

Colbert gave birth to two children, Fay, now deceased, and Margaret, a retired Washington County Deputy Sheriff. She bought a house on N. Commercial at N. Blandena, She also held down a variety of jobs, working for some time at a poultry factory, and also for a Dr. Buck who lived in the Laurelhurst neighborhood.

One of Colbert's lasting legacies is her contribution to dozens of neighborhood children. Every summer she would rent a school bus and organize work parties, taking young people from the neighborhood out to farms to pick produce. For many it was both a first job and a source of pride.

"We grew up picking everything they grew in Oregon," says Kelly. "She drove the bus and took us out to farms where we'd pick beans, strawberries, walnuts, cherries, cucumbers. We went 50 miles in every direction.

"We learned a good work ethic through her. She led by example. I never knew her to smoke or cuss. Aunt Stell was our role model and she was the best role model you could have. I felt that way and I know everyone else did too."

To this day, people come up to Colbert to thank her for taking them to the fields to work and giving them their first chance to earn money.

"If I took you on the bus you couldn't go fishing," she says. "You had to work or you weren't' coming back."

Would you like to make a video about Vanport survivors? Enter to win $1000? Check out The North Portland Multimedia Training Center Video competition.  Help available for new videographers.