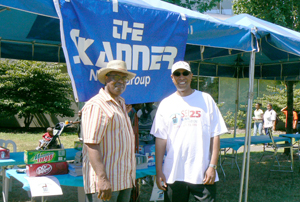 The Skanner's Jerry Foster, left, and Ken Boddie — who will be the keynote speaker at next year's The Skanner Martin Luther King Jr. Breakfast — share a moment during the festivities. 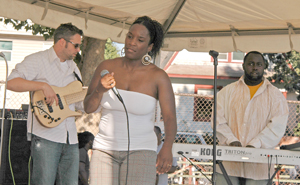 The Liv Warfield Project entertains the crowd at the celebration. 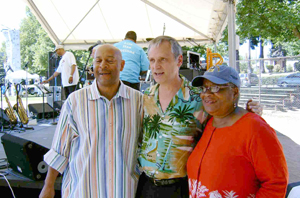 A Quarter-Century Later, Still Going Strong
It was a time to celebrate. Twenty-five years of working with youth, 25 years of community partnerships, 25 years of developing thousands of productive citizens.
The party in the park last Sunday commemorated Self Enhancement Inc.'s beginnings in 1981, when Tony Hopson and his friends began a basketball camp and talked to the teen-age participants about life. That camp turned into Self Enhancement Inc., and history was just around the corner in a $10 million facility on North Kerby Avenue where kids could develop skills, be educated and grow up.
It's so successful that 98 percent of SEI's students graduate from high school and 80 percent go on to college. The program is being replicated in Miami, Fla., and Hopson expects there will be more SEI clones elsewhere during the next 25 years.
State and local politicians, business executives and the kids who went through SEI came by on Sunday to congratulate Hopson. The party in the park included music, good food and games.
But it also included lots of memories.