By Helen Silvis of The Skanner News
Published: 08 December 2011 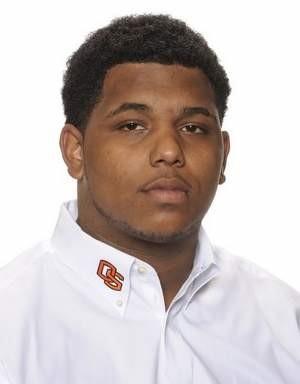 Fred Thompson a freshman football player at Oregon State University suddenly collapsed and died during a pickup basketball game Wednesday night. He was rushed to Good Samaritan hospital in Corvallis, but it was too late to save his life. It was just four days before his 20th birthday.

The Oregonian reports that the 6 foot 4", 317 lb defensive tackle, who graduated from Oakland Tech, died of an apparent heart attack.

Sadly, Thompson's too-early death is not a unique occurrence, according to Richard Allen Williams MD, a fellow of the American College of Cardiology, a founder of the Association of Black Cardiologists and author of "The Athlete and Heart Disease: Diagnosis, Evaluation and Management."

Thompson, who was from Richmond, Calif., said in his bio that he chose Oregon State because of its "family vibe, nice campus and great academics."

While we don't yet know what took Thompson's young life, we do know the most common causes of heart deaths in student athletes. About one-third of deadly heart attacks among young athletes are due to a heart problem called hypertrophic cardiomyopathy, or HCM. HCM is the most common cause of sudden cardiac death in people under 30. A part of the heart muscle thickens, preventing blood from leaving the heart so it has to work harder and harder to pump blood to the body. That can cause an irregular heartbeat and even stop the heart. Many other causes of sudden cardiac death in young people exist, including genetic problems and heart defects present at birth.

Young men account for 90 percent of deaths caused by HCM, and a higher proportion are African American.  HCM was what took the life of 16-year-old Grant High School student, Eddie Barnett Jr. in 2005. In fact, 10 percent of all heart attacks occur in men younger than age 45. When Rob Ingram, the director of Portland's Office of Youth Violence Prevention died Nov. 27 of a sudden heart attack at 38, his family said others in the family also had died young.

So why are more Black athletes affected?

Prevention is not easy, he says.

"Athletes going out for sports need to have an excellent physical exam, but even so it's very difficult to detect a predisposition toward this disorder. There is no physical profile that a doctor can look at. So it's a hidden disorder to a large extent.

"We depend principally on individual and family histories."

A test called an echocardiogram can detect the disease, but it is not a routine test that is given to all young athletes. Athletes with blood relatives who have died at an early age of a heart condition, should always tell their doctors, Williams says. Another big red flag is when an athlete has fainted or passed out during physical activity.

Warning Signs of HCM Include:
A family history of sudden death from heart problems
Fainting spells or passing out during exercise
Chest pain
Dizziness or light-headedness
Heart palpitations
"Things like that should alert doctors, coaches and the individual athletes themselves," Williams says.
The UCLA professor of medicine says we don't have an accurate count for how many young people die from HCM. A registry at the University of North Carolina keeps data, he said, but not every case is reported.
"We don't know what the real numbers are."

Teena Johnson, Eddie Barnett's mother, launched the Eddie Barnett Jr. Foundation after her son died, and campaigned to bring awareness to the problem. The foundation was instrumental in persuading legislators to require schools and large buildings  to have automatic external defibrillator machines. Johnson says she has learned that the machines can save lives.
"Had I known about these when Eddie was still here, I would have strapped one to my back and taken it to every game," she says.
Johnson is in the process of reactivating the foundation. She let it lapse for a while because she needed time to focus on her daughter and grieve, she says. But she feels far more can be done to save lives.
She wants athletes to know they should talk to their coaches and doctors if they feel any unusual fluttering or pain in their chest, she says. She'd also like to see more athletes get echocardiograms, although she knows they can't always predict a problem.
"Eddie went for a follow up echocardiogram every 3 to 6 months," she says. "He had an echo on Jan 31 and he died three weeks later."
In Johnson's view, fewer athletes would be lost if students and coaches were alert to the warning signs; if athletes had to have echocardiograms; and if automatic defibrillators were deployed whenever an athlete passes out. She wonders why a defibrillator was not used when Thompson collapsed.  "I tell people, I don't care if it looks like  a seizure or what it looks like," she says. "Throw the pads on there and rule out the heart issue.
"I don't want another parent to go through what I went through."

Most Heart Disease is Preventable
Other forms of heart disease too are more common among African Americans. But killer diseases,  such as coronary artery disease, develop over time and are far more preventable than HCM and the other problems that tend to kill fit young people.

Elijah Saunders MD, a clinical professor at the University of Maryland, says there are numerous risk factors that increase the risk of heart problems. The good news is that many of those factors can be reduces or eliminated through eating well, exercising, and quitting cigarettes.

"High blood pressure is a very definite problem that's more common in African American men than in others," Saunders says. "Lack of exercise, being overweight, a sedentary lifestyle and cigarette smoking are some of the things that bring on high blood pressure.
"That doesn't explain entirely why more African Americans are affected.  We think some genetics may be responsible."

Saunders, who has studied Afro Caribbeans living in Britain, points to some evidence that people with African ancestry may have a different hormone profile. Stress too plays a part, because people in low-income communities are more  likely to develop heart problems. He says the evidence suggests that salt is a problem for Black people.

"It seems that people of African origin are more sensitive to salt," he says. "It's hard to prove, but I think that most people in cardiology would say so."